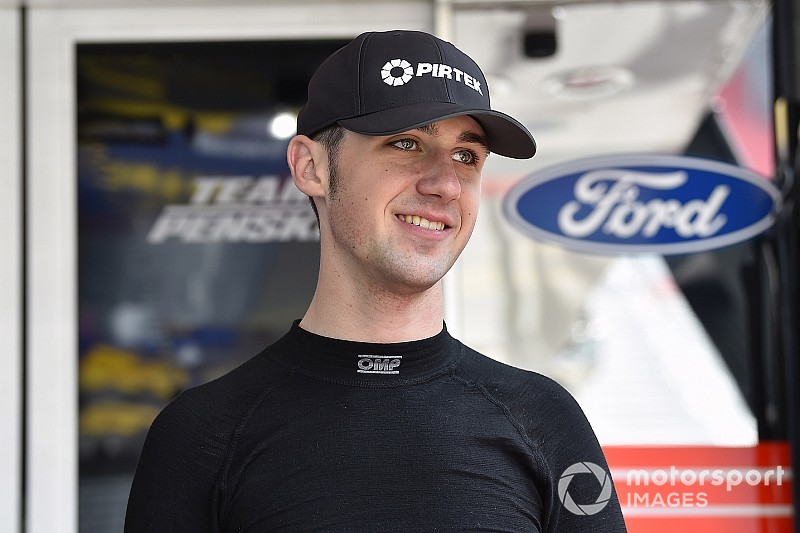 Austin Cindric’s path to the NASCAR Xfinity Series playoffs is one no one else can equal.

Cindric, who made the Camping World Series playoffs last year driving for the now-closed Brad Keselowski Racing, enters this year’s postseason after driving three different cars for two teams during the regular season.

For Cindric, making the playoffs offers him an opportunity to compete in the No. 22 Ford for Team Penske that is in the running for the car owner’s championship and also compete for the driver’s title.

“(It’s time) to take a deep breath and (have) a new lease on life,” Cindric said Tuesday at Charlotte Motor Speedway. “I’m excited because of the ability to have continuity for the first time all year. I’ve driven three different cars for two different teams all year.”

Cindric has made playoffs this season driving the No. 60 for Roush Fenway Racing nine times, the No. 12 Team Penske Ford eight times and the No. 22 Penske Ford in nine races.

Although his situation isn’t normal for most drivers, he felt confident he would make the postseason driving for the Ford teams.

“I felt like going into the year, at least halfway through the year that making the playoffs was a pretty attainable thing,” said Cindric. “The three cars I’m driving for are good cars with good people and quality teams to be around and I feel I’m a capable enough driver to be around.”

There were challenges for the 20-year old driver but he adjusted throughout the season.

“One of the difficult things is the little things you learn in a car and you have to remember that when you get back in the car a few weeks down the road,” said Cindric. “So, in your learning process you have three different things going on at one time.

“But I feel like at the same time I got an advantage over my other competitors because I got to learn from three different groups of people. That is something pretty unique to me.”

As the points are restructured to start the playoffs Cindric enters in 11th out of 12 drivers in the field.

“I only need nine points to be fourth right now and that’s crazy,” said Cindric. “I think the first round is about finishing and click off solid results and the rest will usually take car of itself. You still have to got to beat four cars and you still have to be perfect and run just as hard.”

Although Cindric has yet to win in the Xfinity Series - he finished a season-best second at Mid-Ohio - he enters the playoffs with some momentum finishing ninth at Las Vegas Motor Speedway last Saturday.

“There has been some high highs and some low lows, unfortunately some of those our out of our control,” said Cindric. “Finishing ninth at Las Vegas is just what we needed. Great time in the season to hit the reset button and go strong over these last few races.”

Ultimately, Cindric knows what he has to do if he wants to return to Homestead-MIami Speedway contending for a championship like he did last season in Trucks.

“I’ve got a hole to dig out of it’s is simple as that, same situation I was in last year and we found ourselves sitting in the Championship 4 last year,” he said.