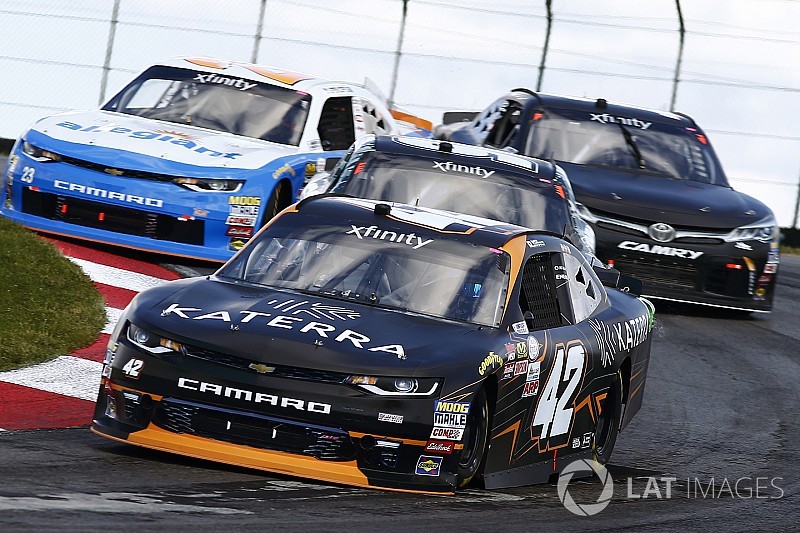 Another win this weekend at Road America would be a little extra special as it would give Chip Ganassi Racing a sweep this season of the three biggest races at the track – IndyCar, IMSA and NASCAR Xfinity.

Marks back with hope of completing CGR sweep

Scott Dixon won the IndyCar race for CGR on June 25 while Joey Hand and Dirk Muller teamed up to win the GTLM class of the IMSA WeatherTech SportsCar Championship earlier this month.

Ganassi has two opportunities to complete the Road America sweep in Sunday’s Johnsonville 180, with Brennan Poole and Justin Marks, both of whom have proved to be successful on road courses.

Marks, who won the Mid-Ohio road course event in the Xfinity Series for Ganassi last season, finished ninth at Mid-Ohio this year and was fastest in Saturday’s first practice session.

“We have expectations to win every time we come to the road courses so I think it would be really cool to do it because it would be a sweep of the race track,” Marks, 36, said of the possibility of winning Sunday’s race. “Regardless, though, we’re just here to win.

“I enjoy driving Road America even more than Mid-Ohio. I think it’s a better race track. I’ve had more success at Mid-Ohio in my career but the style of Road America agrees with me more. I get more enjoyment out of it.

“There are more opportunities to pass and a lot different ways this race can play out.”

Poole, who competes full-time for CGR in the Xfinity Series, tied his career-high with a third-place finish at Road America last season.  He was eighth two weeks ago at Mid-Ohio and comes into this weekend on consecutive top-10 finishes.

“Between Justin Marks and myself, I think we’ve run really well at road courses so far this year,” said Poole, who was second and fifth in Saturday’s two practices. “We’ve had speed and been able to contend for the win.

“At a track like Road America, where anything can happen and any strategy can play out, there’s no doubt one of our cars can win the race and get the sweep for Chip. I would love to get my first win here.”

Asked if there have been any reminders – subtle or otherwise – from Ganassi about completing the sweep, Poole, 26, laughed and said, “Just a few.

“I’m sure Chip will call or text me sometime right before the race starts tomorrow. All week in the shop, it’s been talk about how great it would be if we could pull it off,” he said.

“I think everyone understands the significance of it and how cool it would be to sweep all the races here. It would be really special.”

“This is the toughest form of racing I’ve ever competed in,” he said. “To be able to compete and win against people who do this every week gives me great personal satisfaction. Also, you can’t do it without getting opportunities with great teams. Not everyone can just walk in the door and race for Chip Ganassi Racing.

“Chip hasn’t been doing this for 25 year because he doesn’t know how to win or how to put great people together. The pedigree of drivers that have come through this company is incredibly deep and some of the best that have ever competed.

“Being able to contribute to the win column for the company, it’s a great thing to be able to do.”