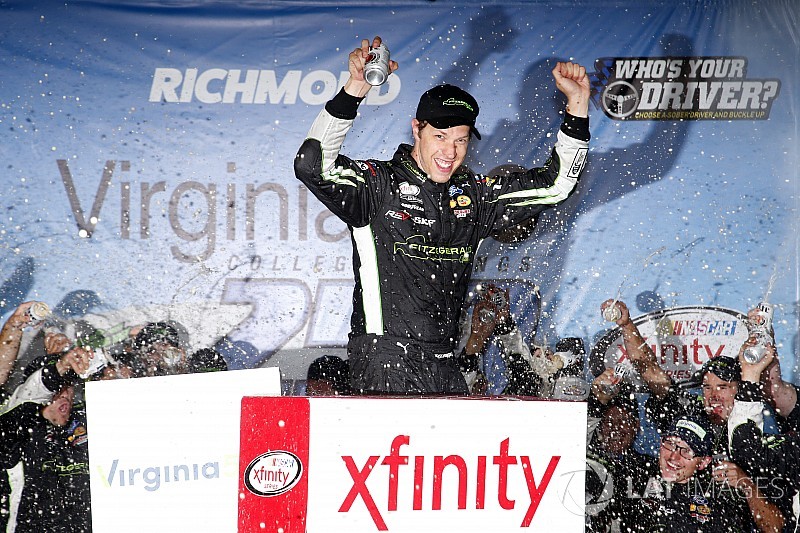 Brad Keselowski sailed off to the win at Richmond Raceway in the Virginia 529 Savings 250.

Keselowski took the lead from Kyle Busch on Lap 234 and led the final 16 laps en route to his fourth-career win at the .75-mile track — and the first victory with the new composite body in the Xfinity Series.

Keselowkski held a 3.008-second lead over Busch at the line. He led 34 laps before collecting his 36th-career NXS win on Friday.

“That was cool," Keselowski said. "I'm not a very patient guy. Being behind the wheel is no fun knowing that you have to be smooth and steady every lap to have a shot at winning it. The team gave me a great car and were real good about being patient and here we are in victory lane."

Busch led a race-high 182 laps before finishing second. Ty Dillon, Daniel Hemric and Elliott Sadler rounded out the top-five finishers in the race. Sadler collected the regular season title with his fifth-place finish.

“That was big for us,” Sadler said. “We’ve been working all year to put ourselves in this position We’ve had some really good cars over the last few weeks. We’re looking forward to Chicagoland next weekend.”

Busch was the first car off of pit road between the segments and led the field to green on Lap 161 with 89 laps to decide the race. Hemric was second followed by Keselowski, Dillon, Sadler, Menard, Earnhardt, Byron, Allgaier and Custer.

Hemric became loose on the outside entering Turn 1 and Keselowski moved into second with Sadler in tow. Hemric dropped to fourth followed by Dillon, Earnhardt, Menard, Allgaier, Byron and Custer. Bell came from 11th and moved past Custer then set his sights on Menard for ninth. Dillon passed Hemric for fourth

Busch and Keselowski raced away from the field with 1.4-seconds separating the Cup drivers from Sadler.

On Lap 172, Keselowski caught Busch — who had been blocked by the lapped car of Mike Harmon. Keselowski took the lead on Lap 173, but Busch passed the No. 22 Ford back on the next lap.

Busch pulled out to a .371-second lead over Keselowski with 70 laps remaining in the race. Dillon ran second followed by Sadler, Hemric, Allgaier, Bell, Byron, Earnhardt and Tifft. Menard reported a bad vibration on the No. 2 Chevy as he tried to hold onto 15th. Four laps later, Menard pitted with a loose wheel.

Keselowski closed to within a second of Busch with 35 laps to go. Dillon, Hemric and Sadler rounded out the top five. Menard pitted again with 30 laps remaining. Busch’s lead was cut to .547-seconds with 25 laps to go. Allgaier ran fifth, followed by Bell, Byron, Earnhardt and Kenseth with 14 cars on the lead lap.

Keselowski caught Busch again with 20 laps to go. He was on the back bumper of Busch entering Turn 2 on Lap 234 — fighting lapped traffic. Keselowski moved to the inside of the No. 18 Toyota and completed the pass on Lap 234. He extended his lead to a second over the next five laps. Keselowski lapped the No. 48 of Brennan Poole, who was running 10th on Lap 241.

Entering Friday night’s race, Byron, Allgaier, Reed, Sadler, Poole and Hemric had locked into six of 12 positions in the playoffs. With Chicagoland to set the grid, Custer, Tifft and Jeremy Clements added their names to the list.

Brad Keselowski set Kyle Busch up over the closing laps of the second segment to collect the Stage 2 win at Richmond Raceway on Friday.

Keselowski beat Busch to the line by .401-seconds after 150 laps. Hemric, Dillon, Earnhardt, Allgaier, Sadler, Menard, Byron and Bell completed the top 10 at the end of the segment. Custer, Annett, Reed, Tifft, Reddick, Koch, Poole and Clements were the only drivers remaining on the lead lap.

“Kyle has a lot speed on the short run,” Keselowski said following the stage. “I don't know if his tires were falling off but we were able to keep up with him on the long run. It's really about long run, short run here. If we get a long run to end the race, I think we can take him. If it's a short run, I'm going to need a little help."

Brendan Gaughan led the field to green for Stage 2 on Lap 85. He was the only driver who didn’t pit among the lead lap cars at the start of the stage.

"We think we'll be able to fade back to 15th or 16th,” Gaughan said. “Remember, we're just racing a couple guys we need to focus on so that was a big deal getting those stage points. If we can hold through the next stage here, we'll be OK with our tires and have a tire bonus over everyone else.

"There will be a bunch of people who will freight-train us here but if can maintain around 15th or 16th the whole run - I think we can. I think we'll be in great position for the last stage."

On Lap 93, Busch and Keselowski passed Dillon and closed into .268-seconds of Hemric. On Lap 97, Busch used the high line in Turn 1 and passed Hemric on the back stretch. Keselowski made the move on the inside entering Turn 1 on the next lap for second-place.

By Lap 110, Gaughan was 20th, the last car on the lead lap. Allgaier and Byron passed Bell, who dropped to ninth. Sadler passed Bell on Lap 115 for ninth.

On Lap 120, Busch extended his advantage to one-second over Keselowski. Hemric held onto third followed by Dillon and Earnhardt. Custer, Allgaier, Byron, Sadler and Bell rounded out the top 10. Busch caught Gaughan on Lap 125 and passed the No. 62 Chevy on the next circuit to leave 19 cars on the lead lap.

Menard bumped Bell out of the top 10 with 20 laps remaining in the stage. Sadler passed Byron for eighth on Lap 132.

With 10 laps to decide the stage, Keselowski moved to within .680-seconds of Busch. Hemric, Dillon, Earnhardt, Allgaier, Sadler, Custer, Byron and Menard completed the top 10.

Busch, who had led 1,315 laps at Richmond before Friday night’s race became the all-time leader in laps led at the track with and additional 103 laps led after the second stage.

Fresh tires paid off for Ty Dillon in the first segment.

Polesitter Kyle Busch led the field to green and checked out early with a two-second lead after five laps. His 51 laps led were the most over the first stage. Keselowski, Poole, Earnhardt and Byron ran second through fifth with Custer, Allgaier, Hemric Koch and Tifft rounding out the top 10.

Busch started lapping the field eight laps in. Dakoda Armstrong and David Starr, who started from the rear of the field for unapproved adjustments, moved up to 25th and 30th after the first 10 laps. Elliott Sadler passed Tifft for 10th and Earnhardt moved up to third.

Keselowski closed in on Busch by Lap 20 cutting his lead to 1.8-seconds. Earnhardt held on to third followed by Poole, Byron, Allgaier, Custer, Hemric, Kock and Sadler. Tifft, Paul Menard, Ryan Reed, Ty Dillon and Jeremy Clements rounded out the top 15 with 30 cars on the lead lap.

Keselowski moved to within 1.1-seconds of Busch on Lap 30. Earnhardt ran third followed by Poole, Byron, Custer, Allgaier, Hemric, Koch and Sadler. Twenty-five cars remained on the lead lap. And Bell passed Reed for 14th. Hemric blasted by Allgaier for seventh on Lap 34.

Timmy Hill, who was 35th and four laps off the pace, came to pit road on Lap 35. Two laps later, he gave up the fight and retired to the garage.

Keselowski caught Busch on Lap 45 and passed the No. 18 Toyota for the point on the next lap. With 25 laps remaining, Keselowski extended his lead to a half-second as Busch was mired in traffic. Earnhardt ran third followed by Custer, Hemric, Byron, Poole, Allgaier, Koch and Sadler.

Hemric, Reed, Ty Dillon, Bell and Gaughan pitted on Lap 55 with 20 laps to decide the stage. Hemric was the first driver off of pit road and lined up 14th — but then dropped to 19th with a commitment cone violation.

The race returned to green on Lap 59 and Busch blew by Keselowski on the outside. Custer fell into third followed by Allgaier, Earnhardt, Dillon Bell, Poole, Byron and Sadler. On fresh tires, Dillon moved up to third followed by Bell and Gaughan. Custer ran sixth followed by Earnhardt, Allgaier, Byron and Sadler on Lap 64. Dillon passed Keselowski then Busch for the lead on Lap 65 with Bell second. Gaughan ran fifth but passed the Nos. 22 and 28 on the next lap.

Just .100-seconds separated Dillon and Bell with 15 laps to go in the stage. Hemric cruised from 10th to fourth. Keselowski ran fifth followed by Busch, Custer, Earnhardt, Allgaier, Byron and Menard. Menard passed Byron and the Allgaier for ninth on Lap 72.

Click on images to watch both videos wrapping up race on Friday:

Five things to watch in the NASCAR Xfinity race at Richmond