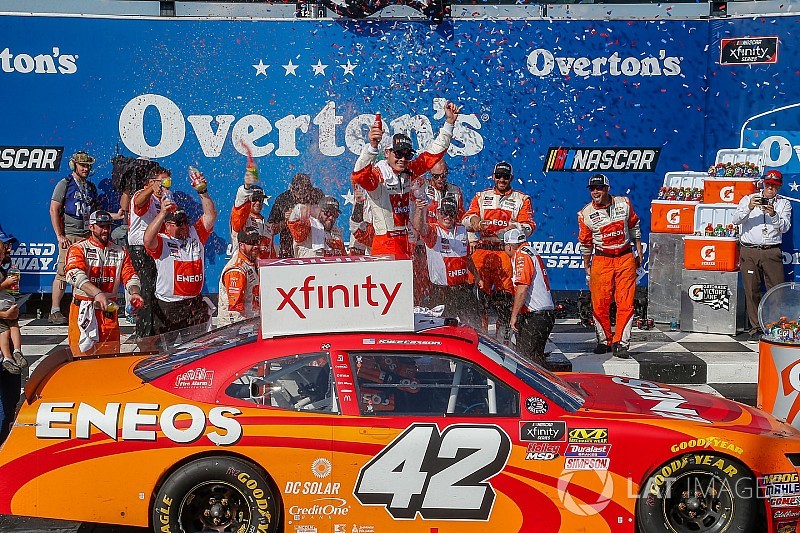 Larson, who won the pole but had to start from the rear of the field due to an unapproved tire change, cruised to a lopsided win over Kevin Harvick in Saturday’s Overton’s 300 at Chicagoland Speedway.

The win is Larson’s second of the season on just three starts and 10th of his career.

“There is always hope with this team. They always make it a lot better for the race. Hats off to them,” Larson said. “Thanks to all fans for coming out. It’s super-hot outside and in the car. Glad to finally get the win here at Chicago.

“I can’t say enough about this race car. We were really bad yesterday (in practice).”

Larson used his appearance in the race this week to honor Sprint car driver Jason Jordan, who died last week from injuries sustained in a World of Outlaws event at Beaver Dam Raceway in Wisconsin.

With less than 35 of 200 laps remaining, Larson was the leader as a final round of green-flag pit stops began – the last stops teams would need to complete the distance on fuel.

Contender Christopher Bell was penalized for speeding on pit road during his stop and had to make a pass-thru penalty. “Sorry guys,” Bell said to his team over the radio.

Custer overshot his pit box during his pit stop which resulted in a very slow stop.

Once the cycle of stops was completed with 20 laps remaining, Larson moved back into the lead followed by Harvick, Suarez, Hemric and Custer.

With 10 laps to go, Larson still held a lead over of eight seconds over Harvick.

Larson, who started the race from the rear of the field, held off Harvick to claim the Stage 2 victory.

During the break between Stages 1 and 2, Harvick was the first off pit road and took over the race lead when Stage 2 went green on Lap 52. He was followed by Bell and Hemric.

Tyler Reddick’s team had a slow pit stop and lined up 11th on the restart.

Bell quickly got around Harvick after the restart to take the lead for the first time in the race.

On Lap 59, Menard moved into the third position with Larson fourth and Allgaier in fifth.

With 22 to go in the stage, Harvick moved up to Bell’s rear bumper and challenged for the lead. But with 19 to go, Larson went three-wide to the high side of both Bell and Harvick and slid into the lead for the first time.

With less than five laps left in the stage Larson had already built up a more than four second lead over Harvick.

“Still too loose,” Harvick said to his team over the radio.

Reddick easily held off Bell to claim the Stage 1 victory which was the first stage win of his career.

Reddick took the early lead on the first lap and on Lap 2 Kaz Grala’s No. 61 lost power and he immediately returned to pit road and then went to the garage.

With 33 laps remaining in Stage 1, Suarez powered around Reddick to take the lead for the first time.

On Lap 26, Reddick was able to get back around Suarez on the high side to retake the lead as Suarez dropped to the runner-up position with Harvick third.

With 15 laps remaining in the stage, Reddick continued to hold the lead followed by Harvick and Bell. Suarez had fallen to fourth.

With five laps left in the stage, Reddick held almost a one second advantage over Harvick.