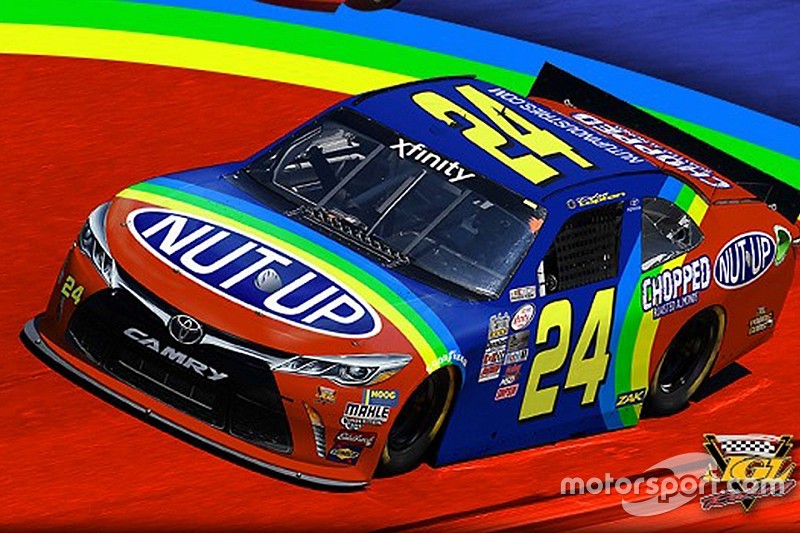 Lupton and his No. 24 JGL Racing Toyota will feature the “Rainbow Warriors” paint scheme of former NASCAR champion Jeff Gordon from his 1993 rookie season with Hendrick Motorsports.

The similarities in the designs are remarkable, even with the different car manufacturers (Gordon ran a Chevy) and sponsors (Gordon was sponsored by DuPont while Lupton will be sponsored by Nut Up).

Lupton, a native of Escalon, Calif., said Gordon, who now serves as a TV analyst for Fox Sports NASCAR broadcasts, was his idol growing up.

“Even though I was born the same year he started in his career in Cup (1993), as I began pursuing my racing career at a young age, I would remember spending my Sunday afternoons in front of the television rooting him on hoping one day I would have the chance to race against him,” Lupton said.

“Next weekend at Darlington, I hope to have his support as I pay tribute to his NASCAR career sporting the famous ‘Rainbow Warriors’ colors.”

Gordon won a Daytona 500 qualifying race, won his first pole at Charlotte in the fall and finished 14th in the series standings on his way to rookie-of-the-year honors in 1993. His career eventually included four championships in what is now the Monster Energy NASCAR Cup Series, 81 pole and 93 wins, including three Daytona 500 victories.

“This is a great honor for myself to honor Jeff Gordon and his iconic paint scheme with this throwback program at Darlington,” said team owner, James Whitener.

“This is a little-known fact – but Jeff Gordon is one of the main reasons I am involved as an owner in this sport as I was a big fan of his. That is why we run the No. 24 and developed the ‘Young Guns’ program.”

NASCAR Roundtable: Will there be a surprise winner at Road America?