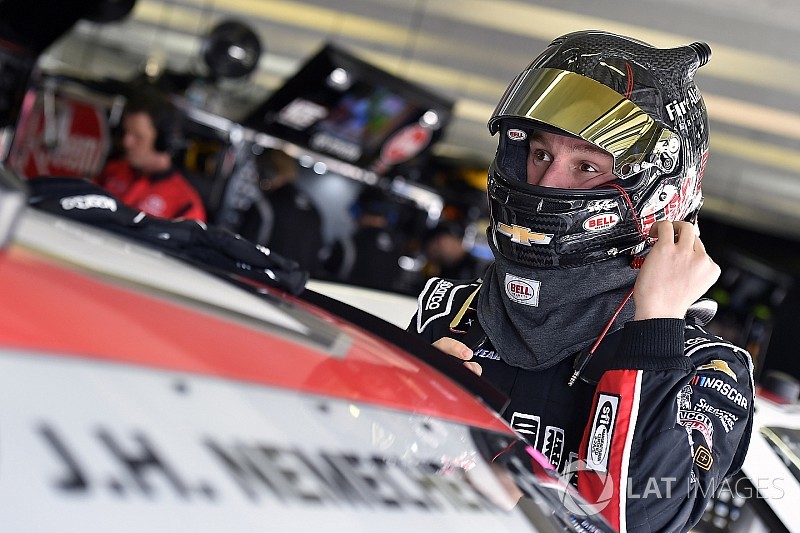 John Hunter Nemechek had never run a lap in an Xfinity Series car until Friday.

In his first practice behind the wheel of the No. 42 Fire Alarm Services Chevrolet at Atlanta Motor Speedway the newest Chip Ganassi racer was eighth-quick on the speed chart.

“It feels good,” Nemechek said. “I’m excited. It’s been a long time—a long off-season to be waiting to get in the car. Last week, it was good to get to Daytona and go up in the spotters’ stand and watch (Kyle) Larson and the guys work their magic.

“But it feels good knowing I’ll be behind the wheel.”

Nemechek had the benefit of working in the Chevrolet simulator prior to this weekend’s Rinnai 250. The second-generation racer also won here at 1.5-mile track in his first start with his family team Nemco Motorsports. He drove the No. 8 Nemco truck at Daytona and led 13 laps before being caught up in wreck with 25 laps remaining in the race.

Nemechek expects to drive the truck when he’s not campaigning in the Xfinity Series. But this weekend, it’s all about Ganassi Racing.

“It’s going to be a lot of fun,” Nemechek said. “I’m looking forward to the opportunity to get out there and show what we can do as a team. I feel confident with all the guys I’ve surrounded myself with. It’s a great team.”

Chase Briscoe, 23, one of the Roush Fenway Racing Team 60 triumvirate, also made his Xfinity Series debut. Like Nemechek, Briscoe, who finished sixth in his rookie season in the Camping World Truck Series last year, was unable to test before taking a lap of Friday.

He was 21st in first NXS practice and 19th in Happy Hour.

“To be honest with you, I have no clue what to expect,” Briscoe said. “I’ve never even started the car up, so it’s gonna be a learning curve. Obviously, you come here wanting to win and you come to the race track every time to win the race regardless, but honestly, expectations, if I were to run top five that would be a huge weekend. I just want to learn as much as I can this weekend and try to put all the laps in.

“That’s the biggest thing. If I wreck out 40 laps in, I’m not learning anything. I’ve just got to be patient and let the race come to me and not push the issue. I’m fortunate to be with a really good team and a really good crew chief, so we’ll just try to put it all together and see what happens.”

Five things to watch for in the Atlanta Xfinity Series race