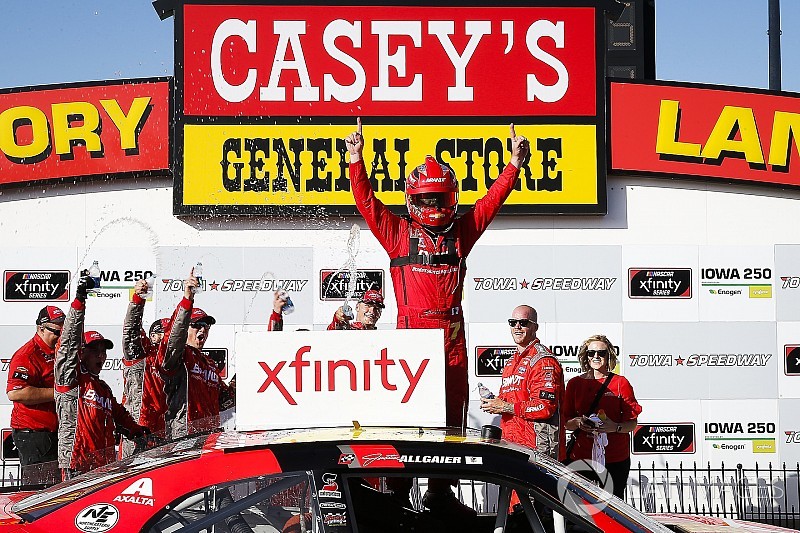 Allgaier lead 182 of 250 laps, sweeping the stages en route to his second win of the season.

"Unbelievable. First of all, all glory to God man," Allgaier said in Victory Lane. "We had a great car today, these guys did a fantastic job. I can't thank everybody at JR Motorsports enough. Our Camaro was fast.

"We're in the middle of cornfields, how can you not enjoy this?"

Austin Cindric led the way at the start in the Team Penske Ford, but the race was quickly interrupted by a caution for Garrett Smithley, who got up into the wall with a flat left front tire.

The remainder of the stage went green with Cindric firmly in control until the final laps when Allgaier arrived. The JR Motorsports driver harassed Cindric for the race lead as they negotiated slower traffic.

Back in the pack, Allgaier's teammate Elliott Sadler was forced to pit road with four laps remaining in the stage after he cut a right front tire and bounced off the wall. He fell multiple laps down and never fully recovered from it.

Up front, Allgaier made a bold move between Cindric and a lapped car with two laps to go in the opening stage, taking the Stage 1 win.

Allgaier then dominated a fairly clean second stage, taking yet another stage win and two bonus points towards the Playoffs.

Between the stages, Custer won the race off pit road, but his lead was short-lived as Allgaier powered around him on the ensuing restart. The battle was then between Allgaier and Bell, who battled back-and-forth for the race lead.

While running side-by-side for the top spot, their fight was interrupted when Chad Finchum found the wall, bringing out the caution with 52 laps to go.

The following restart was chaotic as Custer, Cindric and Allgaier went three-wide for the lead, nearly making contact as they pushed for every inch of track they could take. Eventually, it was Allgaier and Bell who once again emerged in front of the pack, but before they could have Round 2 of their battle, another caution came with 18 laps to go (Brandon Hightower in the wall).

The race resumed with 12 laps to go and after a stellar restart by Jones that briefly put him up to second, Bell reclaimed the position and went on the hunt. He quickly ran down Allgaier, but his Joe Gibbs Racing Toyota stepped out on him coming to the white flag, all but ending the battle for the win.

Allgaier cruised to the checkered flag, securing his seventh career victory and his second of the 2018 season. He is the first Xfinity Series regular to win multiple races this year.

Five things to watch for in the Iowa Xfinity Series race