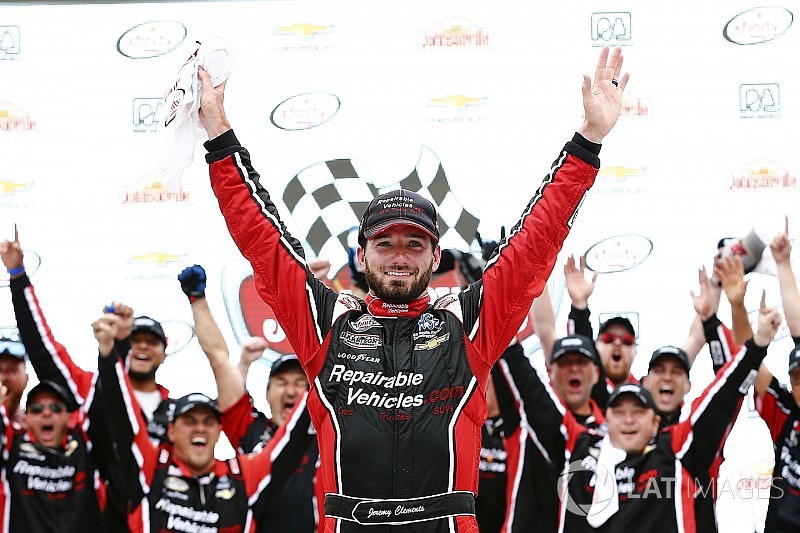 With one lap to go in Sunday’s Johnsonville 180 at Road America, Clements made contact with race leader Matt Tifft in Turn 14, which sent both for a spin.

The good news? The third-place car was more than 11 seconds behind.

Clements was able to get back underway and took over the race lead. He remained comfortably ahead the final lap, holding off Michael Annett for his first career NASCAR Xfinity Series victory.

The win is Clements first in 255 career starts and all but ensures he will compete in the Xfinity Series playoffs this season.

“I can’t believe it. It doesn’t even feel like it’s real,” said Clements, whose previous best finish in the series was fourth last season at Talladega, Ala. “I thought we had a pretty good car.

“When we were leading all those laps, I was like, ‘Wow. I don’t know the strategy here but we’ll go with it.’ It’s just an incredible day. We’re a small team. This car was built in 2008 and it’s the one we’ve run the past four years.

“It’s neat to beat this field with about a 10-year-old car. Races like this are always the ones we circle – the non-companion ones where there aren’t any Cup guys. The short tracks, the road courses and the superspeedways are the ones we go after.”

Clements apologized for the contact he made with Tifft while racing for the lead on the next-to-last lap.

“That was definitely an accident,” he said. “I got in there and got under him. I tried to stay to off of him. It definitely was not intentional, I had no intent to do that. I’m sorry to Matt Tifft.”

“Man, we were struggling on old tires there but we had an awesome car all day,” said Tifft, who tied his career-best finish set two weeks ago at Mid-Ohio. “I just really had a hard time on the brakes and was wheel-hopping quite a bit there at the end.

“He had a lot better tires than me. We had raced each other clean all race, I wish we could have gotten into Turn 1 to try to battle it out. It sucks that’s the way it goes. You just hate to be that close.”

Daniel Hemric got around Elliott Sadler in Turn 7 with three laps remaining in the 10-lap segment and held on through a wild melee to claim the Stage 2 win.

On the final lap of the Stage, several race contenders – including James Davison, Marks, Austin Cindric and Ross Chastain – all spun off the track while racing for position.

Davison was forced to the garage after the incident with a cracked radiator, which brought a premature end to his race.

“We had a car to win today,” Davison said. “We showed that in the first Stage. I can’t tell you what kind of dream this has been being a NASCAR driver and driving in the front. Bummed, but that’s what racing does.”

A tire carcass came off Ryan Sieg’s car in the area of Turn 5 on Lap 15 and brought out a full-course caution. On the restart, Sadler maintained the lead followed by Brennan Poole and Hemric.

Davison out-braked Cindric into Turn 1 and led all 10 laps to claim the Stage 1 victory.

Davison, however, was caught speeding on pit road during the Stage break and had to restart the second Stage from the rear of the field.

Scott Lagasse Jr. got stuck in the gravel trap on Lap 5, which brought out the only full-course caution of the Stage.

During the caution, Gaughan – the only previous winner of the event entered in the race – brought his No. 62 Chevrolet down pit road and his team changed the set-up of his car from wet weather conditions to dry conditions.

Gaughan remained the last car on the lead-lap (38th) at the conclusion of the Stage.

Sheldon Creed was forced to start from the rear of the field after he missed driver introductions. He rallied to 10th after the first 10 laps.