Justin Allgaier gets around Cindric for Mid-Ohio Xfinity win 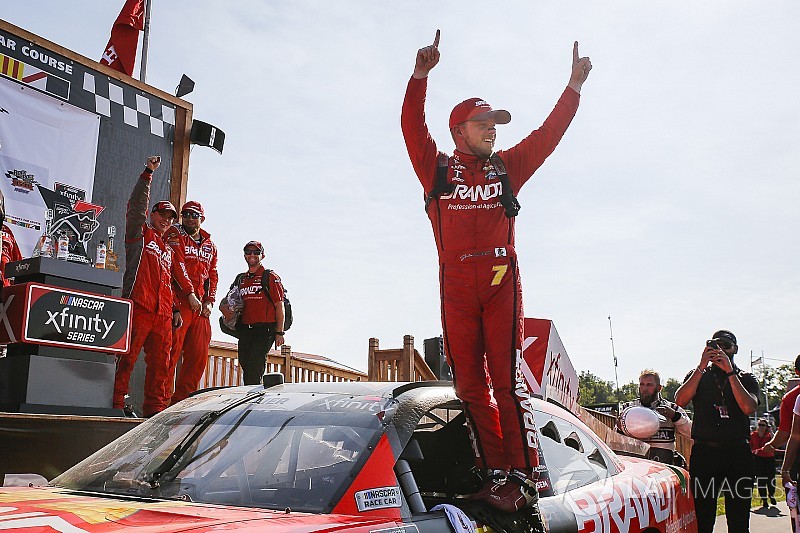 With fresher tires, Justin Allgaier charged through the pack late at Mid-Ohio and captured the checkered flag for JR Motorsports.

The final stage got underway with an interesting cast of characters up front. After staying out during the stage break, Andy Lally led the way ahead of Ryan Reed and Alex Labbe.

Reed soon lost all his track position as he ran off course, as did Labbe after a spin. But Lally remained out front for seven laps before pole-sitter Austin Cindric ran him down and took the lead back with 26 laps remaining.

There was plenty of action back in the pack as Katherine Legge had a brief off in her NXS debut. Brendan Gaughan and  Lally both had costly offs that put them deep in the running order.

But with less than 20 laps to go, things came to a head up front as Cole Custer got into the back of Justin Allgaier for fifth, sending him spinning. Tyler Reddick obtained a tire rub trying to avoid his teammate, which came apart later in the lap. The No. 9 JRM machine went spinning and brought out the fifth caution of the race.

During the yellow, Daniel Hemric, Allgaier, Custer led a group of drivers who opted to pit for fresh rubber. They restarted tenth on back with Hemric leading them

The green flag waved with just 11 laps to go with Cindric still out front. Going through Turn 1, Elliott Sadler got into the door of Christopher Bell as they battled for second, sending the Joe Gibbs Racing driver spinning into the grass. Tifft moved into second as Cindric continued to lead the way.

But with nine laps to go, Legge appeared to have an engine failure that brought out yet another caution.

The race turned into a six-lap shootout and although no one could match Cindric's pace all day, that changed dramatically in the closing laps. Allgaier and Hemric were cutting through the field with those fresh tires and before long, they were second and third.

Allgaier put massive pressure on Cindric and was able to snatch away with the lead down into Turn 1 with four laps to go. After a mistake by Allgaier, Cindric attempted to reclaim the position, but it was to no avail. He had to settle for second as Allgaier collected his eighth career victory and third of the 2018 season.

When asked where this win ranks for him, Allgaier replied in Victory Lane, "Really, really high.

"That call there at the end is what did it. Austin had the best car today, and I thought we gave it away.

"We've been good this year and to do it on a road course is even better."

Cindric wasn't too upset, knowing he was at the mercy of fresher tires. "Man at least I didn't get outdrove. We did everything we could control today, that's all we gotta ask for. To get a stage win was huge. Executed on every restart, just to bad we couldn't capitalize on a dominant car.

"I had every opportunity to shove him off the track, but I didn't need it that bad."

Cindric started from pole position and was firmly in control through the first set of corners in the No. 22 Team Penske Ford Mustang.

The caution flag flew before the first lap was even complete as Dylan Murcott went off at Turn 4 and nosed his car into the tire barrier.

When the race resumed, Cindric once again got away as battle rages behind him. There was a big moment for Brandon Jones, who went off and then spun and

Brandon Jones spins in front of the field but everyone avoids him! Tough break for Lally, who had to come to a complete stop to avoid running into him.

In the final laps of the stage, the majority of the field opted to pit to gain better track position for the upcoming restart. Among them was Cindric, who gave up the stage win to Allgaier.

Cindric was back in control for the second stage. Back in the pack, Allgaier went four-wide trying to make up lost ground, but ended up getting pushed off into the dirt.

On Lap 30, the caution was needed again as Ryan Sieg dropped oil on the track. The race went back green with seven laps to go in the stage, but no one could challenge Cindric.

More drama ensued back in the pack as Chase Briscoe went spinning. Cody Ware then clipped the rear of the car as he went by, forcing the Roush Fenway Racing driver to pit road. The race stayed green.

Fast and Fury(ous): Kaz Grala confident ahead of Mid-Ohio