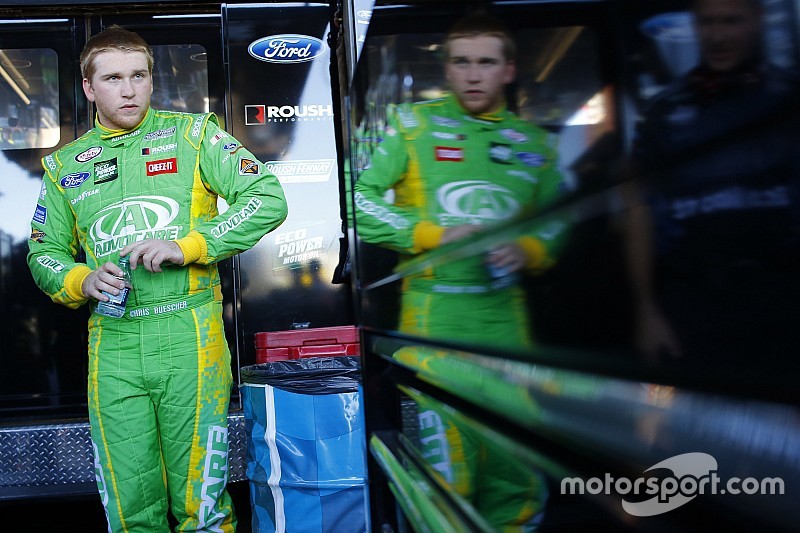 No, NASCAR's Xfinity Series doesn’t have a Chase to its Cup.

However, four drivers are still in the championship mix entering Saturday’s season finale at Homestead-Miami Speedway

And only 24 points separate points leader Chris Buescher from fourth-place Regan Smith. The Chevrolets of Chase Elliott and Ty Dillon are also in the hunt trailing the No. 60 Roush Fenway Racing Ford by 18 and 22 points, respectively.

From the 10th race of the season, when Buescher won at Iowa Speedway, until the 32nd event of 2015, the 23-year-old Prosper, Texas native has been at the top of the standings in just his second full season on the tour.

Despite missing the season opening race at Daytona in 2014, Buescher thrived under the direction of Scott Graves. The team’s consistency provided a solid platform on which to build a championship run this season. In one year, Buescher shaved his average finish from 12.6 to 8.3. He doubled his wins (two), top fives (11) and led more than five times the number of laps (263).

“Been really happy with everything we've been able to accomplish,” Buescher said. “Built on the momentum we had from the 2014 season and were able to have a good year with good consistency. Guys have worked really hard up to this point.

“I mean, it's the same crew that we had, about 90 percent of them, from last year. Chemistry has gotten better as we've gone along, been able to get a couple wins and be in contention for a handful more. So it's been a fun year.”

Buescher finished fifth at Homestead last season. He has excelled on intermediate tracks with an average finish of 8.36 on the 11 1.5-mile venues. If he finishes 13th or higher on Saturday, it won’t matter where his competition finishes.

“We're looking forward to getting to Homestead and finishing it off,” Buescher said. “One of my favorite racetracks that we go to, probably my favorite mile‑and‑a‑half.  t's got an asphalt that's worn out and makes for better racing from some of the other places we go to.

“Excited to get down there for this weekend and finish up the season and hopefully everything works out.”

The defending NXS champ had hoped to pick up where he left off in 2014 — on top. But the No. 9 JR Motorsports team experienced a crew chief change in the off-season and it took the 19-year-old time to adjust.

After wrecking in the season opener at Daytona, Elliott battled back over the next three races to reach the top-five in the point standings. While Elliott remained competitive, his performance wasn’t nearly as consistent. In 2014, Elliott posted two more wins and poles, five additional top fives and led 390 laps compared to 236 this season. His qualifying effort slipped from 8.3 to 10.8 and his average finish rose from eighth to 8.9.

“Things definitely had its up‑and‑down times,” Elliott said.  “We've had times where I feel like we've been pretty strong and we've given a lot of effort to try to improve upon throughout the year.  Fortunate to get to victory lane once so far and we're certainly trying to get there again before the year is out.”

Elliott knows what it takes to execute at crunch time. He wrapped up the title at Phoenix last year, then finished 17th at Homestead. But Elliott will have to run better than that if he hopes to upset Buescher.

“Homestead is a place that I've enjoyed watching over the years,” Elliott added. “I think it produces some good racing.

“Hopefully we can go put on a good show for the fans and try to give ourselves a chance this weekend and worry about the things that we can control and forget about the rest.”

Dillon led the standings for eight of the first nine weeks of the NXS season. But after relinquishing the points lead to Buescher at Iowa, Dillon has played catch up ever since.

To jumpstart the No. 3 team midway through the year, Richard Childress Racing elected to swap crew chiefs for GS2 with Nick Harrison taking the reins from Danny Stockman Jr. Eighteen races later, Dillon is third in the standing but just four points behind Elliott.

Dillon is consistent. He has just two finishes outside of the top 15 — and both times he lost his foothold in the standings. His average finish of 8.7 has been bolstered by 24 top-10 finishes in 75-percent of this season’s starts.

“I feel like our team has had a pretty solid year, and we led most of the series at the beginning of the year and started off pretty solid,” Dillon said. “Midway through the season we started having some issues and things that we couldn't really control and made some changes within our team and changed crew chiefs, and it's really, really turned our program around here lately.”

If there’s a stark difference between Dillon and his three title opponents, it’s his lack of laps led -- and consequently wins. He has zero victories this year. But Dillon’s average finish on intermediate tracks this season is a solid 6.9. And last year, he improved his Homestead performance to seventh from 14th in 2013.

“I think in the last 14 races we've had nine top 5s and really put ourselves somewhat back in this championship, where we still have an opportunity going into Homestead, a track that I really enjoy,” Dillon added.

“It's a fun racetrack. It's multi-groove and worn out and gives you an opportunity to kind of make your own destiny a little more as a driver. I’m looking forward to the opportunity this weekend of hopefully winning the championship and getting our first win of the year.”

Two years ago, Smith won the NXS season finale in his JR Motorsports debut. Thirty-six races later, he’s a man on a mission. Not only is Smith looking to win his first Xfinity title, he’s auditioning for his next ride.

Currently, Smith trails Buescher by 24 points. But he could easily catch Dillon — who’s just two points ahead of him — and his teammate Elliott, who holds a six-point advantage.

“We've had a good year,” Smith said. “Obviously we haven't had a great year because we're not going into Homestead with the points lead right now. We're doing the chasing right now. But with that said, we've had good consistency throughout the majority of the season.

“I think our main problems came within the first six races.  We had a crash and we had a parts malfunction that kind of put us in a hole, so we've been trying to dig out of that hole all year long and have chipped away at it, and certainly closed it up.”

At the midway point of the season, Smith was fifth in the standings, 66 points behind Buescher. But two wins, six top fives and 16 top-10s later, the 32-year-old racer is still in contention.

Certainly, experience will play in Smith’s favor this weekend. He has competed in NASCAR’s top three series at Homestead — and has five starts in the Xfinity Series at the 1.5-mile track.

“To even be going into Homestead with a chance to win the title, it has been a lot of work to get to that point,” Smith said. “We started off the season with good speed. We kind of lost our speed a little bit in the middle part of the year and have started to gain that back.

“Looking forward to the weekend, and I started my tenure at JR out on a bang, and would like to end it the same way.”