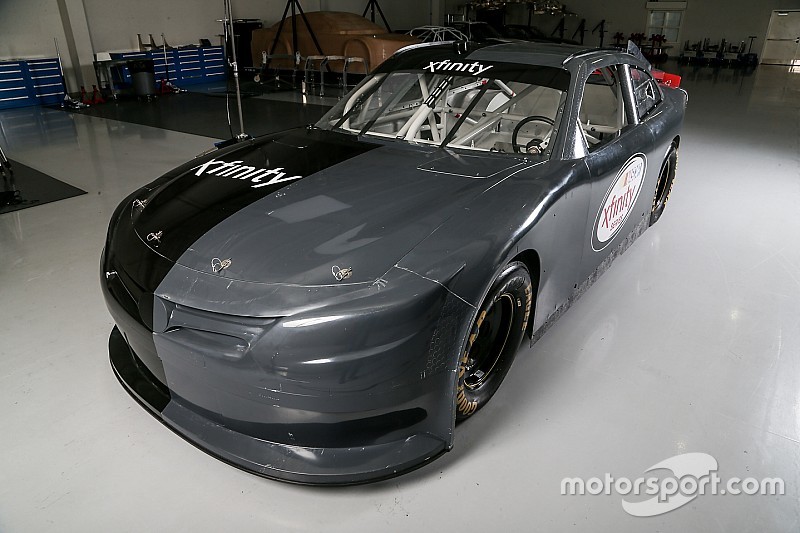 There will be a different kind of plastic surgery in the NASCAR Xfinity Series this weekend, as teams debut flange-fit bodies at Richmond Raceway.

The new composite bodies — a collaboration between NASCAR, team owners and manufacturers — feature 13 separate panels attached by flanges which can be replaced in sections when necessary.

On Thursday, NASCAR will keep the garage open from 10:00 to 5:00 to offer teams adequate time to unload and take the cars through inspection before the first practice on Friday morning.

Steve de Souza, Joe Gibbs Racing’s executive vice president of Xfinity and development, expects the rollout to go reasonably well. De Souza says all three of the company’s teams will run the composite body in the Virginia 529 College Savings 250 this weekend. While there could be initial challenges, de Souza believes the process will be streamlined the longer the teams have to work with the new bodies.

“The first time you do it, you’re trying to figure it all out, how all the parts and pieces work together,” de Souza told motorsport.com. “The more you work with it, the more, I won’t say shortcuts, but the easier it is to work with you kind of have a strategy and how to optimize it and assembly over time and efficiencies and things like that.

“I don’t know how many we’ve built now. I think three — and there’s more work going on. But I’m going to say by the time we do nine, 12 of them we’re going to be better than when we built three or four of them.”

RIchmond is the first of three tracks where teams will compete with the flange-fit bodies. When the Xfinity tour returns to Dover in three weeks, teams have the option of running the composite bodies. Phoenix in November will be the last such race. For teams preferring to save the expense of purchasing new bodies, NASCAR offered the choice of continuing with sheet metal until the end of 2018. By 2019, however, NASCAR hopes to make the flange-fit bodies mandatory.

“It’s a big project to do a body conversion part way through a year when you’re trying to compete in a point series,” de Souza said. “But the guys have done an awesome job and we’re learning as we go with it. NASCAR has done a pretty good job as well with the car, as far as developing it so you can put it together and come out of the shop ready to go.”

De Souza says JGR has taken the new composite body to the wind tunnel. As for a comparison to the steel bodied cars, de Souza says the composites are pretty close aero-wise, so he doesn’t expect that to be a huge detriment. De Souza is curious, however, about how the Camry body stacks up with the other manufacturers.

“NASCAR has done a good job, but you’re looking for parity with the other manufacturers,” de Souza said. “They’re all going to have composite cars, too. It’s not really about how it matches up with your steel car — because everyone’s going to have a new composite car. So how does that look?

“When I look at the car — from all I’ve seen and heard — they're very similar manufacturer-to-manufacturer with what we’re doing now. It’s virtually looks like the same car. So I don’t think there will be a huge deficit in aero numbers, one to another. I think the parity will be pretty close. I would expect it to be.”

Kyle Busch will defend his Richmond win on Friday night behind the wheel of the No. 18 JGR Toyota. He will be joined by Matt Tifft and Christopher Bell, who has yet to run an NXS car at Richmond.

As for JGR’s Xfinity lineup next season, de Souza believes the organization will continue run three teams. JGR has campaigned Xfinity regular Tifft this season, along with an array of Cup veterans; Cup rookies Erik Jones and Daniel Suarez; as well as aspiring NASCAR drivers such as Ryan Preece, who won from the pole at Iowa, Kyle Benjamin, and truck series points leader Bell.

Bell has been rumored as one of the top candidates to move into a full-time NXS ride in 2018.

“We’re starting to work on all the details for that now,” de Souza said. “We’re just starting to move forward with that. We’ve had some really unique opportunities with some great drivers this year — and we got some existing drivers that we’re working through.

“Christopher, obviously, would love to move up. We have others, but, yes, Christopher would for sure be on the short list, obviously. He’s earned an opportunity. But we’re exploring everything. A good bit of it is sponsorship-driven and when you have three teams — and that’s all you have — you have to make what you think are the best and right decisions for everyone’s career path.”

Five things to watch in the NASCAR Xfinity race at Richmond