Ricky Stenhouse Jr. - No. 6 Fastenal Ford Mustang - visited with members of the media today following practice at Circuit Gilles Villeneuve. The following is a transcript of that press conference. 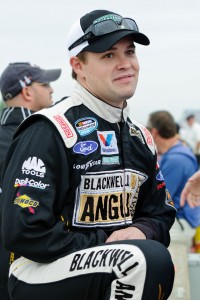 YOU SAID LAST WEEK AT WATKINS GLEN THAT YOU NEED TO GET BETTER AT ROAD RACING. “It’s a tough place for me. I feel like the things I learned last week at Watkins Glen is definitely helping here then you come to a different racetrack and it’s different problems for myself. Just getting laps is good. We made quite a bit of laps there and got better every time we went out. Obviously we’re still lacking some speed that we need to run up front but I think we’ve got enough speed to kind of stay in the top-15 which is kind of our goal here and just minimize our points damage and get out of here and go on to Bristol.”

HOW MUCH DID YOU LEARN FROM YOUR ONE RACE HERE LAST YEAR? “One of the things that we learned is that we were running somewhere in the top-15 and one of our spotters weren’t quite on top of his game and we came around Turn 5, the blind corner there, and they were stopped and we got in the wreck. After that I was just riding around. I noticed that Kenny Wallace was just riding around, just biding his time and finished 12th. That’s what we really need to do is we need to finish as high as we can with the fenders on it. There’s a lot of new guys here running with us and that kind of throws a stick into things. You don’t know who you’re racing out there is one of the biggest things so just taking our time.”

HOW TOUGH IS THE TRACK ON BRAKES? “We’re using ‘em pretty good. But the brake packages that these guys have come up with on these cars it seems like they’re almost bulletproof. They work really good and they worked all practice and obviously the race is a different story when you’re running ‘em green for a lot of laps. I don’t think that’s going to be too bit of an issue. Obviously we’re a couple of seconds off the pace so maybe for some of the fast guys it might be a little worse [smiles] but for us it seemed to be okay for practice.”

YOUR TEAMMATES ARE ARRIVING HERE JUST BEFORE FOR THE START OF THE RACE. IS IT NORMAL FOR THEM TO BE ON THE PHONE WITH YOU OR IN CONTACT WITH YOU WITH THE NEW NATIONWIDE CAR HERE? “I feel like they’ll probably talk the guys that are running their cars ‘cause they seem to be pretty decent. Owen Kelly and Billy Johnson are really good road racers. I’m sure they’re talking to be more than they’d be talking to me [smiles].”

WHAT ARE YOU LOOKING FORWARD TO AT BRISTOL? WHAT APPEALS TO YOU ABOUT THE RACING THERE? “It’s just hard racing and I feel like it’s a driver’s racetrack and we were really fast there the last time. We sat on the pole and we were the only one that could run with Kyle [Busch] for 160 laps until we made a mistake and got a penalty there on pit road [under caution]. Just really looking forward to getting back there. I think we’ve made our cars better since the last time we were there and I think we’ve got a really good shot at winning that race.” HOW DO

YOU LIKE THIS EVENT AND WHAT ARE YOUR THOUGHTS ON THE POSSIBILITY THIS MIGHT BE THE LAST RACE HERE? “I really enjoy it. For one, all the fans that show up here. They seem really passionate about racing. It’s a really cool city to hang out in and like I said when the fans show up it really makes us drive harder I think. When you’re driving around the road course and you see people in trees and just everywhere they can get and I think it’s a cool site to see. Hopefully we can come back.”

HAVE YOU CAN CARL EDWARDS HAD A DISCUSSION ABOUT YOUR HISTORY? WHAT DO YOU EXPECT WHEN FROM HIM WHEN YOU SEE HIM COMING UP BEHIND YOU? “Yeah we’ve talked. We’ve kind of settled everything out but the biggest thing is he’s probably going to be coming so fast I’m not really going to have time to worry about it [smiles]. He runs really good here. Hopefully I can learn a few things from him the few laps that I’m behind him.” IS THERE ONE

PART OF THE TRACK MORE CHALLENGING THAN ANY OTHER HERE FOR YOU? “For myself it’s more getting the braking down as good as I can. I feel like I lose a lot of time under brakes, maybe braking too early or whatever I need to do different there and there’s a lot of good braking zones here. So I just need to get better at that and I think it would help me out a lot.”