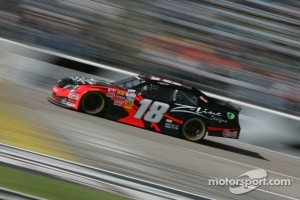 Certainly that is easier said than done, but JGR does hold an ever-so-slight advantage in the standings as the No. 18 Z-Line Designs / BJ’s Wholesale Club Toyota Camry holds a one-point margin over the No. 60 Ford team of Roush Fenway Racing entering this Saturday’s season finale.

Capturing the title this year would truly be a “team” effort as six different drivers piloted the No. 18 car at one race or another this season – Hamlin (two), Kyle Busch (20), Joe Logano (four), Kelly Bires (two), Michael McDowell (five) and Drew Herring (one).

A title this season would be similar to 2008, when the No. 20 car for JGR clinched the company’s first-ever Nationwide Series owner championship with Logano sharing the driving duties with Busch, Hamlin and former JGR driver Tony Stewart. One year later, Busch won the driver and owner titles for JGR in the No. 18 Z-Line Designs Toyota and followed that up in 2010 to give JGR another owner title as he and Brad Coleman split the driving duties in the No. 18 machine.

A fourth consecutive Nationwide Series owner title would make JGR the only team ever to accomplish the feat as it currently shares the record with Bill Baumgardner, who won consecutive series championships from 1995 through 1997 with drivers Johnny Benson (1995) and Randy LaJoie (1996-97).

Hamlin has had success at Homestead in the past as he won the Sprint Cup Series race at the 1.5-mile oval in 2009 and has three top-three finishes in six Sprint Cup starts. He’s been solid in Nationwide Series competition, as well, having finished seventh or better three times in five starts at Homestead.

And Hamlin would love nothing more than to score a victory at Homestead to build on a short yet impressive statistical year in Nationwide Series competition. He won in May at Richmond (Va.) International Raceway and scored runner-up results in May at Darlington (S.C.) Raceway and two weeks ago at Texas Motor Speedway in Fort Worth. He also finished seventh in March at Las Vegas Motor Speedway.

“If we win the race, we win the owner championship and that’s our goal. I enjoy working with Jason (Ratcliff) and the Z-Line Designs guys. They build really good racecars and, even though Jason and I haven’t worked together all that much, our communication is pretty good. We’ve had success at Homestead in the Sprint Cup Series and have run well in the past in the Nationwide Series so, hopefully, we can have a good run and get the victory and owner title for Joe Gibbs Racing.”

You have worked with Denny Hamlin in the past but don’t have a lot of experience with him. What is he like to work with?

“We’ve worked together a little bit in the past. Denny reminds me a lot of Tony Stewart, even though I only worked with Tony a couple of times. He reminds me a lot of Tony, especially in practice. He doesn’t get too worked up. He just kind of goes out and gets a feel for the car, makes slow, steady progress and then, in the race, it seems like he’s always got just a little bit more in his back pocket. During the race, if you can give him what he’s asking for and make some good adjustments and get that communication going, things are pretty good. It’s hard to evaluate communication because we haven’t worked together all that much, but I thought, at Texas, it went really well. Denny is as good as anybody, especially at Homestead. We’ve seen him run well there in the Sprint Cup Series. I’m excited about it.”

What are your thoughts on the owner championship?

“I’m excited just to have the opportunity. When we started the season, when we left the shop for Daytona, we weren’t even sure the 18 car was going to be running a full schedule. We were blessed with guys like Kelly Bires, Michael McDowell and Drew Herring, who brought some sponsorship dollars with them to where we were able to run all the races. So, just to have a shot at the owner title and being ahead going into the last race is a plus. We know going in that we need to win the race. That’s going to be our focus, no different than any other weekend.”

What are the challenges in setting up for Homestead?

“Really, what makes Homestead the most challenging is the progressive banking and the way you enter the corner. It doesn’t have the dogleg in the front like a lot of the 1.5-mile ovals so, visually, it looks a lot different. But, from a set-up standpoint, it’s difficult to get the car to be tight enough to get in the corner to make the driver comfortable and then keep it turning on exit at the same time. So, that’s usually the big compromise at Homestead – making sure the car is tight enough to get in the corner without making it too tight on exit. It can be tough and that track is unique. There is no other track on the circuit I can think of that is like Homestead. We’ve been good there in the past. The challenge this week will be to make sure our entry stays good.”