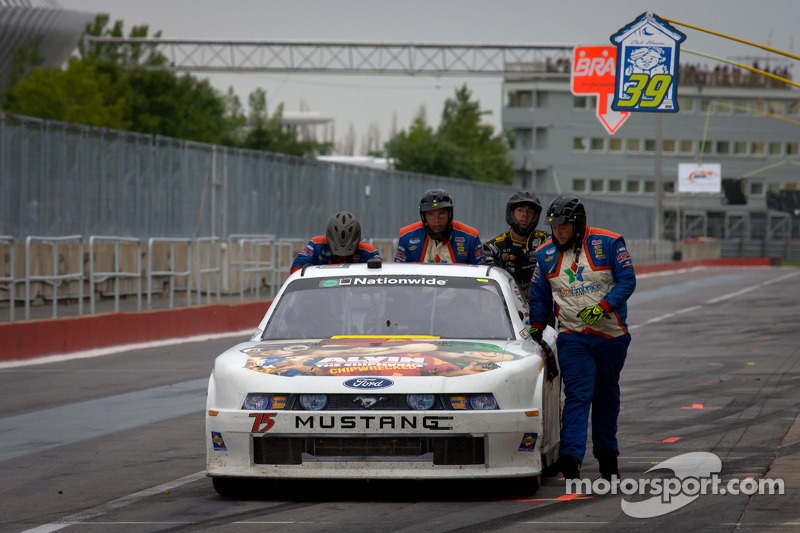 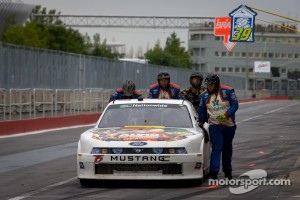 Tomy Drissi, Ford out of the race

It was a good run gone bad for Tomy Drissi in the No. 75 Alvin and the Chipmunks: Chipwrecked / Muscle Milk Ford in the NASCAR Nationwide Cup Series at Montreal's Circuit Gilles Viieneuve for the NAPA Auto Parts 200 Saturday. Running in the start and park car of Rick Ware Racing, Tomy's day ended early when the rear end failed with 10 laps remaining.

"We took the No. 41 Alvin and the Chipmunks: Chipwrecked / Muscle Milk Mustang out for practice just the way it was set up for the Glen," said Tomy. "After a couple laps we brought it in and made some positive changes. I got collected up in the second practice doing some pretty good damage. The Rick Ware crew did a great job of getting the car ready for qualifying, but it just wasn't quite there. Even though we were experiencing some mechanical difficulties, our time was good in qualifying. Unfortunately were squeezed out by provisional starters. So we took the opportunity to race the No. 75 car that Chris Cook qualified."

Starting at the tail end of the field, Tomy moved up into the Top 30 by lap 25. Unfortunately when most of the field made pit stops to change up the pit sequence, Drissi found himself caught out a lap down running 24th with just 30 laps remaining.

"I had been nursing the car all day," noted Tomy. "When we caught a Lucky Dog lap we decided it was time to make a run and see if we couldn't pull off a top-15 finish. It just wasn't in the cards."

Tomy's Ford started to smoke from the rear end and ended the day and his weekend in 34th position.

"Tomy ran a clean and smart race the entire day," stated Rick Ware. "This is the second parts failure of the year for our team and we will go back to diagnose why this particular issue occurred."

“Tomy will be one of our major features in the 50th running of the Rolex 24 Hours of Daytona for 2012 for RWR," stated Rick Ware, owner of RWR. "Having him in a car this early, no matter what kind, gives us a strong baseline of what he likes and needs to go fast. He is a great addition to our program.

Klingerman in Penske car at Bristol 250