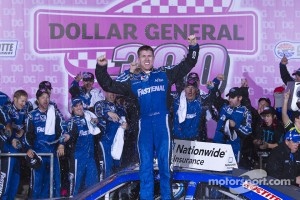 CONCORD, N.C. (Oct. 14, 2011) – Carl Edwards rebounded from hard contact with the outside wall early to score his eighth Nationwide victory of the 2011 season. Edwards led three Roush Fenway Ford Mustangs in the top 10, being joined by Trevor Bayne in third and points leader Ricky Stenhouse Jr. in ninth. The win moved Edwards’ No. 60 Ford Mustang to within three points of the Nationwide Series owner’s point lead.

“This is huge,” said Edwards of the comeback victory. “I hit the wall really hard and messed the right side of the car up early. This is a big week for Ford. Henry Ford won a race for Ford 110 year ago (this week) and we are leading the Nationwide points, the Sprint Cup points and we are winning with these Ford Mustangs - so that is huge.”

Edwards, who led only five laps in the race, fell back as far back as 27th, before steadily rebounding for the victory. Bayne was strong the entire race, tying his career-high with the third-place finish. Stenhouse ran inside the top five the majority of the race - leading 21 laps - and contending for the win late, before struggling on a late restart and settling for the ninth-place finish.

“I was hoping for a Roush Fenway one-two-three (finish), but we still got a first and a third and Ricky was top 10,” said Bayne. “I was really hoping we could get a win tonight and we had a really good car at the end. We finally got it dialed in at the end when it counted. The pit crew did a great job and we were able to put it all together. It was fun helping push Carl to the win at the end and it was great to get Fastenal a first and a third-place finish.”

With only three races remaining in the 2011 Nationwide Series season, Stenhouse leads second place Elliot Sadler by 15 points. The No. 60 trails the No. 18 in the owner’s points by just three points.

Roush Fenway continues to lead both the Sprint Cup and Nationwide Series point standings. With the win Roush Fenway sweeps this season’s Nationwide schedule at Charlotte.