The NASCAR Nationwide Series saved the best for last during pole qualifying at Texas Motor Speedway on Friday for the O’Reilly auto Parts Challenge to be held at the track on Saturday. The No. 2 Kevin Harvick Inc. Chevrolet made a lap in 28.978 seconds to give Sadler the pole starting spot. It was his 11th-career pole.

“Just got him (Kyle Busch), just got enough.

“Just got him (Kyle Busch), just got enough,” Sadler said soon after his qualifying run.

The Joe Gibb Racing duo of Kyle Busch in the No. 18 Toyota and Joey Logano in the No. 20 Toyota were the only other drivers to turn in qualifying laps under 29 seconds. Busch’s lap time of 18.982 was good enough for second starting spot, and Logano qualified third with a 28.995-second lap.

“Having a good race car means a lot,” Busch said. “When you run wide open and give it all she’s got, that’s all she’s got.”

Busch’s No. 18 was the 37th car out on the track of the 48 that made qualifying attempts. He held the provisional pole almost to the end until Sadler went out and took the top starting spot from him.

Ricky Stenhouse qualified the No. 6 Roush Fenway Racing Ford fifth, with a lap time of 29.011 seconds. Clint Bowyer rounded out the top five with a 29.044-second lap in the No. 33 Kevin Harvick Inc. Chevrolet. 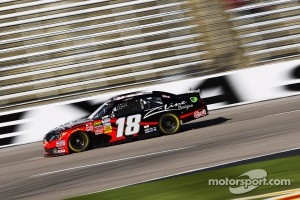 Jeff Green’s lap of 30.457 seconds in the No. 44 Tri-Star Motorsports Chevrolet wasn’t enough to get him into the race on speed, but he was able to fall back on the past champion’s provisional to get in.