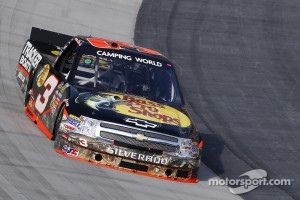 WELCOME, N.C. (November 4, 2011) - Richard Childress Racing and AdvoCare, an award-winning premier health and wellness company, have entered into a partnership for the company to be the primary sponsor of the No. 3 AdvoCare Chevrolet Impala driven by Austin Dillon for 20 races in the 2012 NASCAR Nationwide Series season.

Dillon, who currently drives the No. 3 Bass Pro Shops Chevrolet in the NASCAR Camping World Truck Series, has an 11-point lead in the driver championship point standings with two races remaining. The 21-year-old from Lewisville, N.C., made his NASCAR Nationwide Series debut in 2008 and, in 11 races in the series, has earned two top-five and four top-10 finishes.

"Continuing our solid history with the motorsports community, we are proud to partner with Richard Childress Racing to bring back the No. 3 car in the Nationwide Series with Austin Dillon as the driver. This is the start of an exciting era for both AdvoCare and Richard Childress Racing," AdvoCare President and CEO Richard Wright said, "This extraordinary opportunity is the next step forward in our strategic efforts to take AdvoCare to new heights."

"We are excited to have AdvoCare on board as Austin makes the full time step into the NASCAR Nationwide Series in 2012 driving the No. 3 Chevrolet," said Richard Childress, president and CEO of Richard Childress Racing. "AdvoCare is a company with a great culture that creates a great fit with RCR. We look forward to working closely with them and the other partners on the No. 3 team to build a competitive and successful program."

AdvoCare was the title sponsor of the AdvoCare 500 NASCAR Sprint Cup Series race at Atlanta Motor Speedway. The Plano, Texas, based company is also a platinum sponsor of Operation Homefront, an organization dedicated to providing emergency assistance to those serving in the military and their families. The AdvoCare National Spokesperson is NFL championship-winning and championship game MVP quarterback Drew Brees.

"It's great to have a company like AdvoCare on board for the move into the NASCAR Nationwide Series because I already use and benefit from some of their products," said Dillon. "I believe strongly in their products and quickly became a believer in the strength of their company after the first meeting with them. I'm looking forward to the challenge of moving with Danny Stockman (crew chief) and the guys to the NASCAR Nationwide Series with the No. 3. Our goal next year is to win races and compete for rookie of the year honors."

"Austin is taking the next step in his career by moving to the Nationwide Series," said Earnhardt. "He has used the 3 predominantly throughout his career, and I for one am excited to know he'll be running it at the next level. He's a sharp kid with a lot of potential. The respect he shows the sport and his competitors is a reflection of the family values that has molded him into the person he is today. I wish him luck and can't wait to compete with him on the track next season."