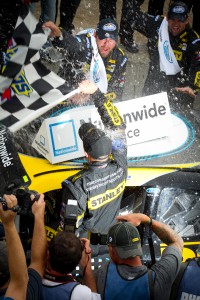 “It has been a heck of a day that started with the Cup practice in Michigan at 10 this morning, a helicopter ride, a plane ride here, another helicopter ride, then a boat ride to finally jump in another racecar to come in and finally win this race,” said Ambrose, who had led the most laps in the first four races at Montreal but did not have a win to show for it.

Even a possible inspection issue -- NASCAR confiscated the right rear spring from the Richard Petty Motorsports car for further evaluation following the race, and it is possible, but not a certainty, the team will be penalized -- likely won't sour Ambrose’s victory.

Not only was Ambrose able to battle from the back of the field where he was forced to start because he was not able to qualify the car Friday, but he also was able to recover from a restart incident with polestitter and local favorite Jacques Villeneuve that dropped him from second to 28th with 26 laps to go.

Villeneuve looked like the class of the field, leading 29 of the first 44 laps. However, on a restart after the race’s second caution, the former Formula One champion locked up his rear wheels and went off course in the Senna hairpin. Villeneuve’s race was over as he lost two laps in the pits while the Penske Racing crew worked on his No. 22 Dodge.

“Jacques and I both dove into Turn 1, but he ran out of track, got on the grass and was unable to stop,” Ambrose said. “Unluckily for him, it ended his day, but luckily for us, we were able to keep going. So in the end, it didn’t matter.”

“I think we had one of the fastest cars on the long runs, but all of those restarts were pretty tough for us,” Tagliani said.

Another local favorite, Patrick Carpentier, who announced he would retire after the race, saw his 27-year racing career come to a bitter end after contact with Steve Wallace on Lap 56 in the Casino hairpin.

“I guess Steve Wallace hasn’t learned how to brake, so he spun me at the hairpin,” Carpentier said. “After that, I just lost it, ran people over and they ran me over back. It’s one of those deals.”

“We had a couple of challenging moments where me and Carpentier were racing really hard,” Wallace said. “I got underneath him, I tried to outbrake him. He crowded me. I got loose, and I spun him out.

After the race, Carpentier’s crew chief, Jerry Baxter, took out his frustration with Wallace by reaching into Wallace’s car on pit road and pulling his hair.

“Obviously Baxter was upset. I’d be upset, too … only girls pull hair.”

Ricky Stenhouse Jr. was able to keep the series points lead despite a 26th-place finish. He leads Sadler by eight points and Reed Sorenson by nine.

Can-Am Duels preview: One last shot to make the Daytona 500