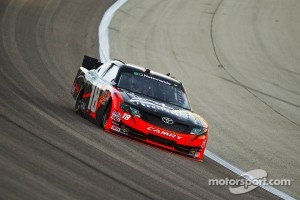 Do you have a good race car for Saturday’s race? “Yeah, having a good race car means a lot. The Z-Line Designs Camry is pretty decent. We missed the opportunity here in the spring to try and win one and hopefully we can get one tonight. The car was good in practice, just kept messing with it and playing around making sure we get some speed. When you run wide open and that’s all she’s got, that’s all she’s got."

Did you think someone would beat you for the pole? “Yeah, I’m not a very good qualifier if you go look at my stats. I don’t qualify on the pole very often. When you know other guys behind you tend to have more horsepower, then you’re not very safe."

How was your qualifying run? “It was a really good run for us. Our Z-Line Designs Camry ran great. Nothing really to complain about there at all. Jason (Ratcliff, crew chief) and the guys did a good job with it today getting some good notes built up trying to work on it and make our program a little bit better. Feels good to qualify like that here at a 1.5-mile. It’s technically, typically not been a strong suit for us this year, so hopefully we can have a strong run in the race on Saturday.”

How was your qualifying run? “Yeah, we were pretty much wide open here. It’s crazy. The track cooled off so much since the spring race here. The speeds are up so much. I’m sure you’ve been hearing that all day. I was pretty much wide open, a little bit free. It’s crazy how close it was. The pole was a .97 and we ran a .99 and Kyle (Busch) ran a .98. It’s really, really close. It’s kind of how it was."

What would a win in Saturday’s race mean to you? “I think we have a shot at it. I think I have a pretty good GameStop Toyota. We’ve been working really hard on our 1.5- mile program stuff lately and trying to pick that up as far as Joe Gibbs Racing as a whole. Both me and Kyle (Busch) needed to pick it up on the 1.5-mile stuff lately. We’re working on that, I think we’re getting closer. In Charlotte, our cars both had more speed in them, so we’re getting closer to tracks like this now."

How was your qualifying run? “Our Shore Lodge Toyota was pretty good. We didn’t make a mock run in practice, so we didn’t really know what we were going to have. Honestly, we needed all of practice to work on our car. We were fighting it a little bit. We hit on it right at the end and I started actually getting confidence. Our speed came and picked up and suddenly we were where the fast guys were. The guys, Kevin Kidd (crew chief) and everybody made really good adjustments on our Camry and we were able to lay down a pretty good lap and hopefully have a pretty good starting spot for Saturday’s race."

How was your qualifying effort? “I’m aggravated and I’ve been aggravated on these 1.5-mile tracks. I literally ran wide open and I’m a right-foot driver and if I ran wide open, I mean I ran wide open. I don’t know how the hell I could possibly go any faster. To sit here and the 11 car (Brian Scott) out runs me by a half-a-second, I don’t know. Our cars are just off right now. Got a lot of drag in. We took this car to the wind tunnel and it was the best car we’ve had all year by about 200 pounds of downforce, so I don’t know what to say. It’s frustrating, but not too bad for the 5-Hour (Energy) guys. I feel like we’ll have a shot to run good here. Ran good here both races last year and had an alright car here the first race, so we’ll see and we’ll give her hell."

How difficult is it to race this weekend after the recent passing of your grandfather Russ Wallace? “It’s a crappy weekend. Just sucks, you know? He (Russ Wallace) meant everything in the world to me and my family. He was kind of the patriarch of the Wallace family and anytime somebody dies like that, it really affects a lot of people. It sucks, but I just can’t wait until Monday and Tuesday when we get these things put to bed and bury him to where he’s good to go. We’re thinking about him for sure. It’s just a crap deal."

How was your qualifying effort? “You know what, it seems like we’ve been running 29.50s all day long. This is probably the most speed I have felt all year long. This track is really fast. They set the fastest time in the history of NASCAR in the Cup Series here. This track is really, really fast. We’ve been running 29.50s in everything we’ve done. I guess we’re a 29.50 car, but I like my Toyota Camry. We’ve worked hard on it for the race and we’re ready to go race."

What has this week been like for you after the passing of your father Russ Wallace? “It’s been a brutal week for me from the standpoint that I’ve never known what it was like to lose a parent (Russ Wallace). I’m part of a fraternity that I never wanted to be a part of. Other people say I’ve lost my dad and I’m like, ‘I’m sorry,’ but it really hit home when it was me. People say they lost their dad and they always got real sincere and I’m like, ‘Wow,’ and now I know what they mean. It’s just horrible. We’re going to do good here and then we’re going to bury my dad Tuesday in St. Louis, our home town. But Monday at Grace Covenant Church in Huntersville, N.C., we’re going to have a celebration for my dad from four (PM) until whenever, so anybody reading this want to come on out, it’s going to be nice. It’s not going to be boring."

Starting Position: 30th How was your qualifying effort? “The lap – the car was a lot better than I was. I’m just disappointed I left a ton out there. There’s a lot more grip. We knew we were pretty tight in practice and our mock we weren’t happy with at all. I made too many adjustments as far as how much grip the track gained from our mock and wish I had one more lap. Like I said, the car’s better, so I’m looking forward to tomorrow and this place widening out and we’ll go up to the top."

What are you expecting in tomorrow’s race? “These cool temperatures -- we're starting earlier than we have ever started all year, starting at noon. As cold as it is here, there’s just going to be a ton of grip and, like I said, hopefully the top comes in. There will be a Cup practice before we race and that’s usually when they move up, start moving down. Starting where we are starting, we need that to happen so we can make some positions up quick."