Parker Kligerman returns to the New England for Loudon 200

Parker Kligerman: ready for a "powerful" and "profitable" homecoming

MOORESVILLE, N.C. (July 10, 2013) - Connecticut native Parker Kligerman returns to the New England area as the Nationwide Series heads to New Hampshire Motor Speedway in Loudon for Saturday's CNBC Prime's The Profit 200. Making his homecoming weekend more exciting, is the fact that Kligerman will be debuting a "powerful" new sponsor, North American Power -one of the fastest-growing energy suppliers in the country - on his No. 77 Toyota Camry. Not only would leading laps and bringing home a victory in the 200-lap event be a "profitable" endeavor for the 22-year-old driver, it would also help a worthy cause. Through a partnership with Speedway Children's Charities, North American Power will donate $1,000 for every lap their driver leads, up to 10, to CHaD - Children's Hospital at Dartmouth. 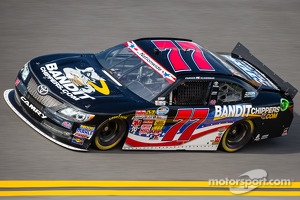 While Kligerman and his No. 77 team enter this weekend's event on the heels of a tough few weeks results-wise, the single-car operation has proven capable of being able to lead laps and compete for wins in NASCAR's second division. The upstart group led 13 laps at Michigan International Speedway in Brooklyn three weeks ago before surrendering the lead to come down pit road for fuel when an apparent rain storm never reached the track. They followed it up with their best overall weekend of the year - qualifying third, leading four laps and picking up a season-best third-place finish at Road America in Elkhart Lake, Wisc. Last weekend at Daytona (Fla.) International Speedway, the prospering bunch sat fourth on the final restart and appeared to be in a prime position to collect their first win of the season before getting shuffled back in the closing laps and ending the night with a disappointing 18th-place finish.

This weekend's event will be Kligerman's second start at "The Magic Mile." This time around he is hoping for better results, as he qualified 19th and finished 18th in the 2011 Truck Series event in "The Granite State," which happened to be won by his current crew chief Eric Phillips.

While his result at New Hampshire wasn't what he had hoped for, the talented youngster has a crew chief that has been very successful at the flat track. The veteran signal caller has three wins at New Hampshire Motor Speedway, including dominant victories in each of the last two events held at the 1.085-mile oval. With Kyle Busch Motorsports owner-driver Kyle Busch behind the wheel of a Phillips-prepared Tundra, the duo captured the pole for both the 2010 and 2011 Truck Series events and led 321 of the combined 350 laps en route to two victories. The Illinois native also won the 2004 event in NASCAR's third division with Mike Skinner.

Backed by a successful crew chief and a powerful new sponsor, Kligerman is hoping this will be the day he gets his first career Nationwide Series win and makes it a profitable homecoming.

How exciting is it for you to be going back to the New England area for a race?
"I was already really looking forward to going back to New Hampshire Motor Speedway and then when we added North American Power -- a New England based company -- onboard as the primary sponsor for this race it made it that much more exciting. The neat thing is that my mom was one of North American Power's first customers -- so I know firsthand the money that they save their customers, how dedicated they are to providing homegrown renewable energy and the amazing things they do for charity. A few weeks ago I was able to be involved in some of their charity work up in New Hampshire in conjunction with Speedway Children's Charities. We visited kids at CHaD -- the Children's Hospital at Dartmouth --, David's House and the Concord Boys and Girls Club. We also have a charity program going on this weekend, where for every lap I lead -- up to 10 -- North American Power will donate $1,000 to the Speedway Children's Charities with the funding going to CHaD. I think we've led laps in two of the last four races, so hopefully we can put this No. 77 North American Power Camry out front on Saturday and raise some money for a good cause. We've been running a lot of black-based Toyota's this season, so it's a nice change to have a blue-and-white car -- I think it's going to look really sharp on the track and would look really nice in victory lane."

The Nationwide Series is in the middle of 21 consecutive weeks of racing, is that more taxing on a smaller team like you have at KBM than it is for some of the bigger teams? "Yes and No -- we've been fortunate that we haven't torn up a lot of cars and that has been very helpful. We probably don't have the manpower that some of the bigger Cup affiliated teams have, so our guys end up working long hours and weekends. Most of our guys work in the shop and travel -- we only have a few shop guys -- you think that after racing on a Friday you might get a few days off, but my guys have been in the shop on Saturday's and Sunday's setting-up cars for the next week. It gets tough, it's a grind, but you just have to put your head down and get through it."

KBM-09: KBM-09 will make its third start of 2013 in Saturday's CNBC Prime's the Profit 200 at New Hampshire Motor Speedway in Loudon. The Camry has four top-five finishes across eight career starts. The last time it was in action, Kligerman was relegated to a 14th-place finish at Iowa Speedway after running out of fuel on the final lap and having to coast to the stripe. Kurt Busch collected KBM's lone Nationwide Series win with the Toyota in its debut last April at Richmond (Va.) International Raceway.

Highlights from first half of 2013 season