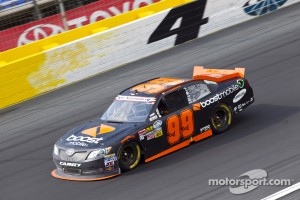 CORNELIUS, N.C. — Crew Chief Mike Greci knows the key to Travis Pastrana’s success in the No. 99 Boost Mobile Toyota in Sunday’s NASCAR Nationwide race at Chicagoland Speedway will be all about one thing—tires.

GRECI: “Goodyear’s radial and bias ply tires are fantastic tires, but they feel tremendously different to the driver. Travis has a lot of talent. He’s been successful in the East cars because the bias ply tires are more forgiving. He can manhandle them and drive the wheels off of them and still run fast laps. The Nationwide radial tires are totally different. The more you manhandle a radial tire the slower you go. Travis needs to find the balance between the two different tires. I really think once he can get a chance to drive a Nationwide car on a consistent basis he will learn the tire and start having better results.”

PASTRANA ON CHICAGOLAND: “I am hoping for a better outing this weekend. I did learn a lot last weekend, but it was still disappointing. I still have a lot to learn about the Nationwide tires. I tend to over drive the radial tire and get myself in trouble. But with each race I run I think I am getting better. The K&N bias ply tires seem to fit my driving style a little better. I can drive the K&N cars like I do my rally car. When you do that in a Nationwide car you go really slow. It’s a learning process which we knew would take some time. Our goal this weekend is the same as it has been all year—finish every lap.”

Kyle Busch searching for victory at Chicagoland in company-Owned No. 54