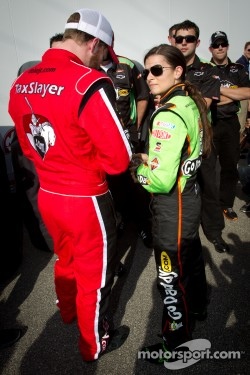 Patrick and the JR Motorsports No. 7 GoDaddy.com team registered a lap of 182.741 mph (49.25 seconds) to earn the No. 1 starting position for Saturday’s race. In doing so, Patrick became the first woman to win a pole award for a NASCAR sanctioned race since Shawna Robinson on March 11, 1994, at Atlanta Motor Speedway. This marks the first pole award for JR Motorsports at Daytona and seventh overall since entering Nationwide Series competition in 2005.

“This feels so good,” Patrick said. “I’m very happy for JR Motorsports and Go Daddy. Both have been so supportive of me. And I’m happy for (crew chief) Tony Eury Jr. He puts so much effort into the speedway cars and he’s so good at them, yet he had never won a pole at Daytona. He came up to me and said ‘Something I’ve never done!’ I’m just happy that I could turn the wheel and push the pedal down, and now we’re on the pole!”

“This is a great day for our company, our sponsors, our fans, and everyone associated with JR Motorsports,” said Kelley Earnhardt Miller, co-owner and general manager of JR Motorsports. “All the employees have worked so hard in the off-season to put out a product that our sponsors and fans can be proud of. That includes everyone in the shop and everyone in the front offices. To have Danica come out of the box like this and win a pole at Daytona is very special. I couldn’t be more proud of her, Tony Eury Jr., and the entire team. We are looking forward to a great race and great season.”

Patrick has competed on a limited basis for JR Motorsports for two years, but this marks her first full season with the team co-owned by Earnhardt Jr., Eury Jr., Earnhardt-Miller and Rick Hendrick. Last year she became the highest-finishing female in NASCAR national touring series history with her fourth place at Las Vegas Motor Speedway on March 5, 2011.

“Go Daddy's Danica Patrick is an icon of racing and isn't afraid to go after what she wants," said Go Daddy Chief Marketing Officer and Senior Executive Vice President Barb Rechterman. “As her sponsor, Go Daddy believed in Danica from the start. She's as competitive and focused as anyone you'll meet and we love that about her.”

As the 34th qualifier on Friday, Patrick had to patiently wait out the qualifying runs of Earnhardt Jr., Kyle Busch, Denny Hamlin, and 13 others. No one could match her time, although reigning Daytona 500 winner Trevor Bayne came within .007 seconds of it.

Hamlin: "Nothing will ever come free" driving for 23XI Racing

Hamlin: Daytona 500 risks being “strung out” due to Next Gen draft

NASCAR Roundtable: Looking ahead in the playoffs and Silly Season 2018

Craft-Bamboo Racing is on the hunt for a driver for next week's Bathurst 12 Hour after Lucas Auer was injured in a practice crash in Daytona.