Menard runs away with Michigan pole

As the 40th driver out on the Michigan International Speedway surface during NASCAR Nationwide Series pole qualifying, Paul Menard was the first driver to turn a lap in under 40 seconds. The No. 33 Kevin Harvick Inc. Chevrolet driver’s lap time of 39.554 seconds stood through the remainder of the qualifying session to earn the first starting spot in Saturday’s Alliance Truck Parts 250.

“It came to the green and felt really good,” Menard said of the handling on his race car.

“The car was pretty much perfect in (turns) one and two.

Menard did say, though, that he gave up a little late in the lap.

Of the five cars left to attempt qualifying runs after Menard, two managed an under-40-second lap. Sam Hornish Jr. in the No. 12 Penske Racing Dodge posted a lap time of 39.867 to claim the second starting spot. Like Menard, Hornish said that his car felt good at the beginning of the lap but went away near the end.

“The car was pretty much perfect in (turns) one and two,” Hornish Jr. said and he also mentioned that he had to put his car in the field on speed during qualifying, so he said that he didn’t push the issue in turns three and four.

Carl Edwards was the one other driver to turn in a lap under 40 seconds. His 39.985 second lap garnered Edwards the third starting spot for the No.60 Roush Fenway Racing Ford.

Manufacturers based in Michigan -- Chevrolet, Ford and Dodge -- exhibited parity during the Nationwide qualifying session at MIS. Each of the “big three” manufacturers were represented by the top-three qualifiers, as Menard was in a Chevrolet, Hornish Jr. in a Dodge and Edwards in a Ford. 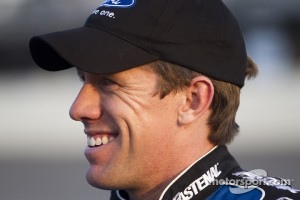 According to Bayne, his car was “too loose on the second lap.”

Hornish Jr. and Brad Keselowski were the only two drivers to qualify in a Dodge. Keselowski qualified eighth with a time of 40.308 seconds in his Penske prepared car.

The Joe Gibbs No. 20 of Joey Logano was the fastest Toyota, turning in a lap time of 40.317 seconds.

Forty-five cars made qualifying attempts for 43 spots on the starting grid. Failing to make the race were Chase Miller and Brett Rowe. They both posted times faster than Robert Richardson Jr. and Tony Raines, but Richardson Jr. and Raines received starting spots based on owner points.