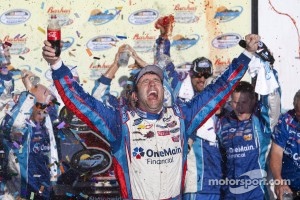 Combined, the RCR entries posted 50.5 percent of the fastest laps of the race, with Harvick posting the fastest lap 63 times, Dillon 21 times and Sadler eight times.
Each of the RCR entries completed the entire race without falling below 15th in the running order.
Dillon led the field in Quality Passes (passing for position while running in the top 15) with 28.
Harvick boasted the highest average running position during the race with an average running place of 2.7.
Sadler was followed to the finish line by Brad Keselowski, Ricky Stenhouse, Jr., Dillon and Harvick.

The next Nationwide Series race is the Sam's Town 300 at Las Vegas Motor Speedway on Saturday, Mar. 10. The third race of the 2012 season is scheduled to be televised live on ESPN2 beginning at 5 p.m. Eastern Standard Time and broadcast live on the Performance Racing Network and Sirius XM Satellite Radio.

Elliott Sadler Gets Retribution with Victory at Phoenix International Raceway

Elliott Sadler and the No. 2 OneMain Financial team earned their first victory of the 2012 NASCAR Nationwide Series season Saturday afternoon at Phoenix International Raceway. Less than four months after Sadler's Nationwide Series championship title hopes were dashed at the Avondale, Ariz., track after a late-race incident, Sadler came back with his new Richard Childress Racing team with a vengeance. The OneMain Financial Chevrolet started from the eighth position, and competed within the top 10 for much of the 200-lap race. Competing in the eighth position with 80 laps remaining, Sadler began to make a push toward the front and picked off cars one at a time. The caution flag flew with 36 laps remaining, and crew chief Luke Lambert called Sadler to pit road for left-side tires and fuel, getting off pit road in the second position. When green-flag racing resumed, Sadler was able to quickly slide in front of then-leader Brad Keselowski, holding him off until the checkered flag dropped. The victory at Phoenix serves as Sadler's sixth-career Nationwide Series win, his first since 1998 when he captured the checkered flag at Rockingham Speedway. With two races under his belt in the 2012 season, Sadler heads into next week's event at Las Vegas Motor Speedway with one win, two top-five finishes and the Nationwide Series driver point lead, 10 points ahead of RCR teammate Austin Dillon.

ELLIOTT SADLER QUOTE: "It's a very emotional win. We all know how long it's been since I was in Victory Lane. Luke Lambert, my crew chief, made a great call at the end to change left-sides only, and it definitely panned out the way we wanted it to. The guys on the No. 2 OneMain Financial team have worked so hard throughout the off season and it is great to be able to kick our season off like this. Thanks to Richard Childress for this great opportunity and to everyone who has worked on this program. It's a great feeling to be back in Victory Lane after so long."

Austin Dillon and the No. 3 AdvoCare Chevrolet team finished fourth in the Bashas' Supermarkets 200 at Phoenix International Raceway to earn their second consecutive top-five finish in the 2012 NASCAR Nationwide Series. Dillon started the 200-lap race from the ninth position and never fell outside of the top 15, utilizing spotters Andy Houston and Kevin Hamlin to navigate the black No. 3 Chevrolet around lapped traffic on the tight short track. The Lexington, N.C. driver was scored in the 10th position when the first caution flag of the race was displayed at lap 42 and crew chief Danny Stockman directed Dillon down pit road so the RCR team could service the car with left-side tires and an air pressure adjustment designed to maximize the handling of Dillon's machine. Following the routine stop, Dillon restarted the race in the third position on lap 48, but fell back to 13th in the running order within one lap after getting loose and making contact with another competitor. Dillon recovered from the setback and began working his way toward the front of the field, making two additional pit stops under caution periods. He was scored in the ninth position at the race's halfway point and made it to fifth in the running order with 30 laps remaining in the race. He passed his RCR teammate, Kevin Harvick, for the fourth position on the final lap to claim his second consecutive top-five finish. In addition to the fourth-place finish, Dillon was the Sunoco Rookie of the Race and now sits second in the Nationwide Series driver championship point standings.

AUSTIN DILLON QUOTE: "It's great to see RCR on top. Our Chevrolets, so far, have been really fast this season, so all of our tests during the off season have paid off. I really thought we had something for them today. We ran the fastest laps a bunch but we just lost track position a few times. We made a two-tire pit stop at one point, and then I came really close to wrecking off of turn four and lost a bunch of track position. We really passed a lot of cars today. At the end of the race, it was tough to get going after only taking two tires but Elliott Sadler was able to so I think that is what won him the race. I want to congratulate him on the win. That's really great for him and RCR."

Kevin Harvick had a dominant performance in his return to the NASCAR Nationwide Series with Richard Childress Racing but had to ultimately settle for a fifth-place finish in the Bashas' Supermarket 200 at Phoenix International Raceway. After starting the 200-lap affair from the 12th position, the 2006 Nationwide Series Champion raced the No. 33 South Point Hotel & Casino Chevrolet up into the top five and used a four-tire pit stop call by crew chief Ernie Cope to take the lead for the first time on lap 52. Once Harvick took the point, he didn't look back as he went on to lead 107 of the 200 laps, stretching the margin at one point to more than six seconds over the second-place driver. It wasn't until a caution-flag period with under 40 laps remaining in the event that the No. 33 Chevrolet relinquished the lead. One final pit stop was in order, and since Harvick had been so strong on earlier restarts, Cope used the same strategy and once again called for four tires and fuel. This time, however, many other teams chose to complete just a two-tire stop which lined up the South Point Hotel & Casino Chevrolet seventh on the final restart with 33 laps remaining. Heavy traffic caused the black and gold machine to handle differently than when it paced the field, and though he picked up a few positions, Harvick couldn't work his way back to the front in the remaining laps. RCR teammate Austin Dillon scooted under Harvick on the final lap to claim a fourth-place finish while teammate Elliott Sadler took the checkered flag in the desert.

KEVIN HARVICK QUOTE: "That four-tire stop at the end just really got us farther behind than we thought it would. I think we restarted seventh and it just didn't handle the same back in traffic. I really want to congratulate Elliott Sadler on the win and everyone in this RCR Nationwide Series shop. This team worked hard and the South Point Hotel & Casino Chevrolet was really good today. It's just a 50-50 call there at the end and you win some and you lose some. We're going to keep our heads up and know we had a fast car today."