The No. 60 team earns a hard fought 16th at Road America 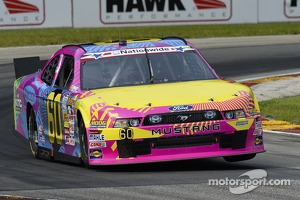 “I was hoping to have more speed, considering this was my first road course and my experience from Rally,” Pastrana said. “We started off slow and went with a very conservative strategy. Everything was working out well. I was up well inside the top-10 and didn’t notice the caution was out and got into trouble. Then when we got in the back, we were in a cluster. We got taken out by the 33 [Max Papis], but came back to 16th. All-in-all, it was not what he hoped for, but I was very happy with the crew and I am excited to go back to another road course.”

The NASCAR Nationwide Series (NNS) traveled to Wisconsin for the first road course race of the season at the 4.05-mile track. Teams battled rainy conditions on Friday during practice and qualified under cloudy skies on Saturday morning.

Pastrana was slated to start 19th, but after running off course on his second qualifying lap, the crew elected to change the flat spotted tires before the race started. As this was an impound race, NASCAR deemed the tired change as unapproved, dropping Pastrana to the rear of the field for the start of the race.

At the drop of the green, Crew Chief Chad Norris put Pastrana on a different pit strategy, calling the No. 60 to pit road for fuel only on Lap 2. Pastrana returned to the course in 40th and began to climb his way through the pack.

By Lap 7 Pastrana had worked his way up to 23rd, radioing that the handling of the car was a little too tight for his liking. He returned to pit road on Lap 15, with the crew taking a swing at the tight handling condition with some adjustments. On Lap 18, Pastrana restarted 14th.

The No. 60 restarted 14th on Lap 18 and continued to ride in the top-20, with Pastrana still reporting that the car was running too tight, especially in the slow speed left hand turns. The crew took the opportunity to make more adjustments under the caution on Lap 31, putting on four fresh tires and making a wedge adjustment.

On the next run Pastrana radioed that the adjustments were working and that the No. 60 Ford Mustang felt really good. Unfortunately the team would not get the opportunity to show just how strong the car was. As the caution waved on Lap 40, Pastrana received some damage to the hood of his Mustang as the cars in front of him slowed more quickly than expected.

Pastrana was forced to visit pit road to fix the damage. The team pit multiple times under the caution to make repairs, put on fresh tires and add fuel. The remainder of the day was a battle in the back of the pack. After the second attempt at a green, white, checker finish, Pastrana crossed the line in 16th.

Redemption for Allmendinger in Wisconsin

Austin Cindric, AJ Allmendinger on where they stand after Bristol