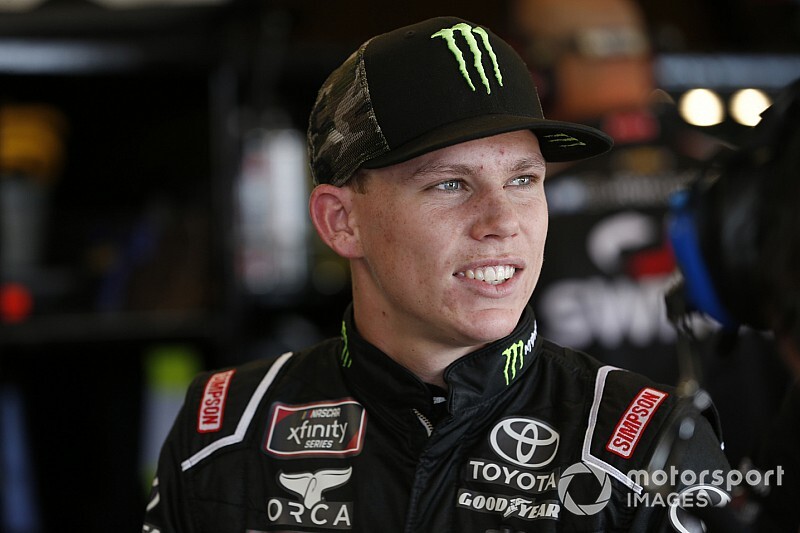 Joe Gibbs Racing will be fielding a pair of rookies in the NASCAR Xfinity Series next season.

The team announced on Tuesday that Riley Herbst will join rookie teammate Harrison Burton as a fulltime competitor next season, driving JGR’s No. 18 Toyota.

Burton will compete in the No. 20 and Brandon Jones is returning to the No. 19 to give JGR three fulltime drivers competing for the 2020 series championship.

“I’m very excited to compete full time next season in the Xfinity Series in the iconic No. 18,” said Herbst. “I’ve enjoyed the transition to the Xfinity car this season, learned a ton and look forward to continuing to learn next season and improve each and every week.

“I’m eager to get started and have Monster Energy back with me and can’t wait for Daytona.”

Monster Energy, ORCA Coolers, and Terrible’s will continue their sponsorship relationship with Herbst and move to the Xfinity Series with him in 2020.

Herbst, 20, made his Xfinity Series debut at Iowa in June, finshing seventh. He has made eight starts this season earning three top-10s. He is also competing in the No. 18 this weekend at ISM Raceway near Phoenix.

The Las Vegas native started his career at JGR in 2017 as part of the driver development program and competed in the ARCA Menards Series. He has made 47 starts in ARCA with one win, 16 top-five and 30 top-10 finishes.

Herbst has also made seven starts over the last two seasons in the NASCAR Truck Series with Kyle Busch Motorsports, with a best finish of third this season at Talladega.

“Riley continues to work hard on gaining experience and becoming more comfortable behind the wheel and I think next year will be no different as he competes full time for rookie of the year, race wins, and the Xfinity Series championship.”

A crew chief for the No. 18 Toyota team will be announced at a later date.