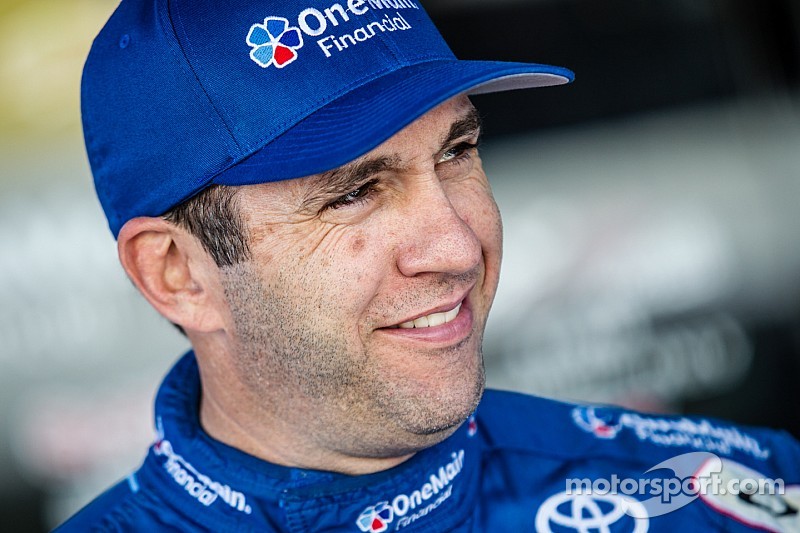 MIAMI – Elliott Sadler will have a new home at Roush Fenway Racing in 2015.

After two seasons with Joe Gibbs Racing, the Toyota flagship took a “different direction” with a fresh crop of drivers and new sponsors that didn’t include Sadler.

With two decades invested in the sport, Sadler, 39, wasn’t ready to hang up his helmet. So he enlisted the help of his long-time sponsor OneMain Financial, his good friend and former car chief Phil Gould and returned to Ford, where he enjoyed the most success during his Cup career at Robert Yates Racing.

“The reason I feel the most confident about where I’m going is no matter what car I was driving, what weekend, when Edsel Ford (II) was at the racetrack he’d always come up and give me a hug and ask me how I was doing,” Sadler said. “No other manufacturer even thought of doing that.

“So it’s kind of neat to have that kind of relationship with Mr. Ford and his staff and everybody there. So for me to be going back with those guys, the support they’ve shown me in the past and what they’ve told me what’s in the future for me in their program is pretty special.”

Putting the pieces together

While it helps a driver to have the support of his manufacturer, Sadler’s reunion with Gould is also self-assuring. Gould, 37, was a former Pro Stock racer before transitioning to NASCAR as a mechanic and rear tire carrier in 2001. For the last decade, Gould honed his skills at Richard Childress Racing, where he was promoted to crew chief on the No. 2 Nationwide Series car last season with Brian Scott.

When Gould was the car chief under Luke Lambert on the No. 2 team in 2012, Sadler finished a career-best second in the point standings with four wins, four poles, 15 top fives and 24 top-10 finishes. His average start was 6.7 with an average finish of 7.6. Sadler describes his relationship with Gould as “awesome”.

We have the same beliefs in racing, a really strong friendship – which to me means a lot in this sport.

“Phil and I have been good friends since I drove the 2 car,” Sadler said. “We’ve kept in touch a lot over the last couple of years. We really started to put this together over the last couple of weeks, maybe a month or so that we could get back on the same team. We have the same beliefs in racing, a really strong friendship – which to me means a lot in this sport. I feel really confident where I’m going, the stuff we can bring.

“When a driver has a team that believes in him and supports him each and every week, it means a lot. I’ve had that in the past and done good – and I’ve been through some years when I didn’t have it. But the support system we got set in place is going to help give us what we need each and every week."

A need for speed

Sadler is also encouraged by the horsepower generated by Roush Yates Engines. Having worked with Doug Yates at RYR he knows how strong the program is, particularly the restrictor plate engines.

“They’ve got motors,” Sadler said. “At Talladega, when I was racing against Ryan Blaney in the 22 car I thought, ‘Holy cow, that car is fast.’ Ryan was doing a tremendous job but his car was so fast.

“That was one of the first things I told Phil, I said, ‘OK, Daytona, we’re going to be in really good shape. Let’s start working on Atlanta because Daytona, with the engine package that we’re going to have we should be in good shape when we get there. It will be up to the driver to make all the right moves and passes in the race. But our cars and engines should be good there.”

Sadler, 39, started in the Nationwide Series in 1995. Although he moved into the Cup Series four seasons later and remained there for a dozen years, with just one points finish in the top 10 (ninth, 2004), Sadler’s greatest success has come in NASCAR’s secondary series.

With two 20-something up-and-comers already under the Roush banner, Sadler believes his experience will be beneficial and expediting their learning curves.

“I really think I can step in – and I want to,” Sadler said. “That was the first discussion we had. That I could come in and help Chris (Buescher) and help Ryan (Reed). I started talking to those guys the last couple of races just getting some feedback about what they’re thinking and what they’re fighting, the things they’re through.

“When I was a young driver, I think I spent more time in Dale Jarrett’s trailer than my own, leaning on Mark Martin a bunch. A lot of young drivers do that – lean on guys with experience. I want to be that guy for Roush. I can come in there and not only do what I’m supposed to do but help bring those guys along just from a mental standpoint of how to work with your team and work with your crew chief to get the most that you can each and every weekend.”

And a stronger stable will benefit Sadler in the long run. Sadler acknowledged that he "has not had one single conversation" about driving a Cup car at RFR. For now, his focus is completely on what will the called the XFINITY Series.

"I’ve got to put it on my shoulders and do what I’m supposed to do each and every weekend to try and win that championship and win those points," Sadler said. "We didn’t score enough points the last couple of years. We have to score some more points and I’m going to try and do that.”