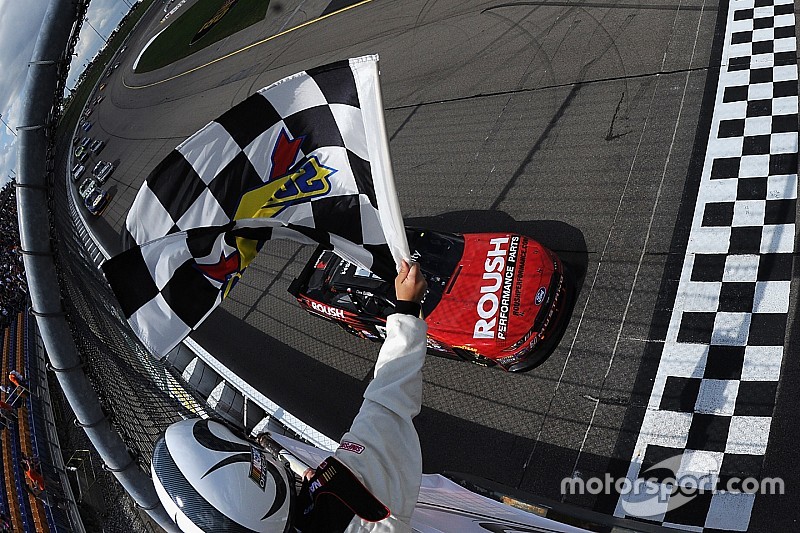 Jack Roush believes Buescher and Wallace are ready to move on.

Years ago, Jack Roush had a novel thought.

Organize a contest, audition drivers, pick a winner. What affectionately became known as the Gong Show provided an incredible opportunity for an aspiring racer.

Kurt Busch was that guy in 1999. His first round was at Toledo, the second at Phoenix. The 20-year-old kid from Las Vegas, who went on to win six of 18 races on the way to the Southwest Tour championship that year, found himself the following season in a Ford truck for Roush Racing. The organization liked what they saw and added seven Cup races to his schedule at the end of the 2000. Four years later, Busch was the Cup champion.

While the Gong Show no longer exists in its original form, Roush has his fill of potential candidates auditioning for the next Sprint Cup ride — all under the same roof and in his NASCAR XFINITY Series program.

When Roush Fenway Racing unveiled its NXS lineup for 2015 featuring Chris Buescher, Darrell “Bubba” Wallace Jr. and Ryan Reed, there was no question whether these young guns would be up on the wheel and trying to get noticed.

Reed proved his worth by winning the season opener at Daytona. Buescher won nine races later at Iowa. In the closing laps of Saturday’s race at Dover, Wallace appeared ready to complete the young gun trifecta until contact with Buescher led to a cut tire on his No. 6 Ford Mustang.

Buescher went on to win his second race of the season — and Wallace, who won the pole and led the second most laps at Dover, was none to happy with the result.

“I would say I am happy Roush won but I am not,” Wallace said. “I have been racing with Chris a lot so I don’t know. I might phone call into the Monday morning meeting. We will see.”

From the Cat's seat

When Jack Roush was on SiriusXM NASCAR Radio on Thursday night with Claire B. Lang, he had had time to review the incident between the two drivers and acknowledged that Buescher indeed “made a mistake”.

Bubba didn't squeeze him, Bubba held his line and Chris lost his footing, got loose and swerved up into him.

“He didn’t have enough traction for his action,” Roush said. “Bubba didn't squeeze him, Bubba held his line and Chris lost his footing, got loose and swerved up into him. It wasn't clear that Chris was going to be the benefactor of that. It’s very likely he could have ended up with a cut tire, they both could have or both wrecked.”

Not surprisingly, Wallace manned up and attended the meeting. Roush wouldn't reveal what was discussed between the drivers — other than it was “conciliatory” — but he offered an overview of the scene.

“They were sitting at a big, long conference table,” Roush said. “They were sitting as far away from each other that they could be — at one corner of one side, Chris was seated at one corner and on the other corner at the farthest side, Bubba was in a seat. The first thing I did was put them across from each other. If they were going to run together like two rats, I didn't want to give them a head of steam. I wanted a short punch, not a long punch so the damage would be minimal on the collision.

“As it turned out, Chris was unhappy with the fact that he caused the problem. He admitted his complicity in it. And Bubba was unhappy with the fact that Chris coughed at him with less relief than he might have been than the apology he got. But they’ll work it out on the race track. They have good reasons to work together. They’re both trying to occupy the same space.”

Reed and Buescher are two of only three drivers to win XFINITY Series race against Cup drivers this season. Erik Jones, from the Toyota camp, is the only other non-Cup driver to win a race (Texas) in the first 12 NXS events.

Buescher is also the points leader for the XFINITY series. Wallace, Elliott Sadler and Reed are currently fifth, sixth and eighth, respectively.

RFR President Steve Newmark said earlier this week on SiriusXM NASCAR  that he expects to see the Roush Fords fighting for the lead. He added it’s the company’s philosophy “to encourage that passion” among their drivers.

Those guys need to do anything they can to get the victory — and that’s always been Jack’s expectation.

“Generally it’s a good problem to have when you have your cars running 1-2 at the end of a race,” Newmark said. “That’s what we like. Obviously, we’d like 1-2-3-4 and at that point, those guys need to do anything they can to get the victory — and that’s always been Jack’s expectation.

“It debunks the theory we were hearing a few years ago about team orders. These guys are racing as hard as they can and these drivers want to win. I think it’s natural an understandable that there’s some frustration — and if I’m in Bubba’s shoes, I understand. He’s had the fastest car in our stable and one of the two fastest cars on the track the last two weeks and hasn't gotten the finishes he deserves. I fully believe that Chris and Bubba will work it out.”

Roush believes Wallace showed tremendous maturity on Saturday despite his obvious disappointment. Although Wallace and Buescher are both competing for that next Cup opening at RFR, Roush agrees with Newmark that it’s in the drivers best interest to get along.

"Chris doesn’t have a history of running over people and not being fair with his encounters on the race track. And Bubba doesn’t either," Roush said. "So, neither one of them are takers, rather than reasonable people for a compromise.

"And they’re on the same team and they have more to benefit from helping one another and working together than they do if they oppose each other and stand on their own island which I’m sure they won’t do.”

Kyle Busch to return to NASCAR Xfinity competition this weekend