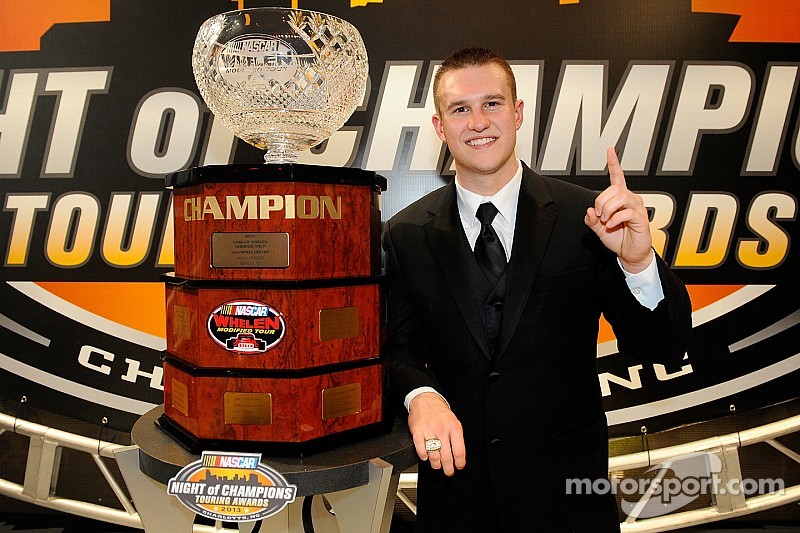 In the midst of the Riverhead Raceway pit area out on the east end of Long Island, New York, Ryan Preece is joking around with his crew; preparing to race a pair of 35-lap Modified races. However, there is something different about this young man compared to the rest in the midst of the small field of cars that roar around the .25-mile track in less than 12 seconds per lap.

Preece has been a member of the NASCAR Next class since 2013, and is the lone representative from the NASCAR Whelen Modified Tour in both divisions. He began to be recognized nationally after winning his first career race at the Martinsville Speedway as a 17-year-old after leading 265 of the 300-lap event in 2008. Since then, he has gone on to win eight more races, along with the 2013 Whelen Modified Tour championship.

But his journey has been nothing short of adventurous.

This year has been a struggle for the Eric Sanderson owned team; at least partially. Their No. 16 Ford has led three races in 2014, yet they have yet to earn a victory. At Bristol, Preece led 30 laps, but fell back to the 10th position late in the going. That's just been how his season has gone.

You have to keep your head up and keep moving forward and trying to win.

“I’d say we just haven’t had as much luck as we’ve had in years past where restart lanes need to go my way,” Preece told Motorsport.com at Riverhead. “We had a rough first three races, and ever since then we have just been making gains and getting top-fives. If we just get top-fives and top-threes, we will be there for the wins pretty soon.”

“We were fast at Riverhead. I feel like one move I tried to make put me back to ninth and I was only able to get back to fourth. At Monadnock, we just had no cautions and it didn’t quite work out for what we had. At New Hampshire, I feel like we had a car that could win. There were probably three or four races where we felt like we could win, but things just didn’t quite go our way. You have to keep your head up and keep moving forward and trying to win.”

Moreover, it all goes back to his roots.

Working through the ranks

After starting out in quarter midgets, he worked his way up through the ranks to where he is today. As a high school student, he finished inside of the top-five in the well-known Race of Champions. While continuing to move up the ranks, Preece began to show his strength of not wrecking race cars, and that is how he landed opportunities with top-tier teams.

Although the 23-year-old has found success racing in the NWMT, he still races at local short tracks. On Saturday’s at Riverhead, he races for legendary owner, Bill Park; splitting the No. 20 car with 2003 NWMT champion, Todd Szegedy. On Friday’s, he races a SK Modified at Stafford Motor Speedway for Steve Greer’s Gunsmoke Stables Racing, and currently leads the championship standings over Ted Christopher – the 2008 NWMT champion.

But the biggest challenge for Preece, like so many other drivers in his position, has been the attempt to find sponsorship. With a rather impressive resume, if he were to find funding; there would be no problem in finding a team to race in one the top-three tiers of NASCAR.

“Probably trying to find sponsorship to move down south. It all comes down to if you have money, and right now I’m just trying to find somebody; either investors or some sort of a partnership to get an opportunity down south. I want to bring short track racing to the big three because right now; you have a handful of guys that are grassroots racers and the rest haven’t really been to the bullrings like we have,” he said.

This year, he has three victories at Riverhead and sits third in the championship standings even though he has missed several events. His preference has led him to this point, and keeping his racing roots as part of what has become a hectic schedule makes it all worthwhile.

It’s what they call him at Riverhead. Pretty simple, isn’t it?

Well, “NASCAR Next” has done wonders for Preece. It happened to be that he was voted into the first NASCAR Next class as he was in the midst of a championship campaign. The program is intended to help develop young, talented drivers on and off of the race track. That is exactly what it has done for Preece.

It has brought my name and my branding to a whole new level as far as people knowing who I am and what I have done.

Ryan Preece on NASCAR Next program

“As far as NASCAR Next goes, it is definitely been a great opportunity. t has brought my name and my branding to a whole new level as far as people knowing who I am and what I have done. It is great to be a part of, and it obviously shows that NASCAR knows who you are and they are paying attention because you get voted into it. It is good to be a part of,” he said.

But even though he is in the program, he is probably the least recognized of all the drivers. It is not because he doesn’t have the talent that the others do. However, it is because the modified divisions just don’t receive as much recognized as the K&N Pro Series East and West. Now, it is starting to pay off after racing modified cars for eight years.

Pairing up with Tommy Baldwin

In 2012, Preece won a pair of races for Sanderson’s team, and he also started out front six times. With all of his success, the young driver caught the eyes of a NASCAR Sprint Cup Series team owner.

Tommy Baldwin Jr., a former racer from Long Island, found Preece. Although he has limited funding, Baldwin fields two cars in the Sprint Cup Series after starting and parking for several years with multiple drivers. But with drivers like Preece looking for a chance, Baldwin opted to sign him for a one-race deal last year.

“Me and Brian Slaga from East West Marine went up and saw him (Tommy Baldwin) at New Hampshire,” he said to Motorsport.com. “He told us to come up and see him. We went up there and made a deal. That’s kind of how everything started. He is one of the true owners I would say right now. There are guys like Bill Park (Riverhead Raceway car owner). Everybody I have raced for is where you don’t really have to bring money. As far as Tommy goes, you need help doing that situation. He is a true owner. He spends money on his race car and to get me in that seat. It is great to be a part of and it is a lot of fun. I’m looking forward to Richmond in two weeks.”

This year, the pair came up with funding to run two races. He earned a 14th-place finish at New Hampshire Motor Speedway with Tommy Baldwin Racing thanks to the help from East West Marine, which has backed him for several years. With the solid effort has come the recognition he deserves.

Baldwin is going to field a car for him at Richmond International Raceway less than two weeks from now. In nine career races at Riverhead in the NWMT, he has four wins and has never finished worse than 10th at the .75-mile track. It will mark his third career start in the Nationwide Series, and he is hoping for a top-10 finish with the momentum he has after winning his third race of the year at Riverhead this past weekend.

But even with that, nothing has changed him.

It is unlikely that Preece will be racing full-time in the Nationwide Series next year. Moreover, if additional funding can come along, TBR will run him in more races. There is the possibility he could race more this year, but that all depends on sponsorship.

I got to mess around with one (a Cup car) at the Thompson Speedway road course. It is a lot of fun

After the race at New Hampshire, he went down to Thompson Speedway’s road course with the organization. For the first time, Preece tested a NASCAR Sprint Cup Series car.

“I got to mess around with one (a Cup car) at the Thompson Speedway road course. It is a lot of fun. I’m kind of hoping to get back there. I want them to go back with it, so I can run a few more laps. It is definitely something else.”

While there are no plans for Preece to be entered in a Sprint Cup Series event in the near future, this could be a sign of things to come. Testing the Cup car might have opened up the door that he needs to impress Baldwin, whom of which enters Cup cars with no sponsorship.

Ryan Preece on being successful in NASCAR

As he continues to progress, the Connecticut-native is searching for his second straight NWMT championship. But the focus on his future remains. He refuses to quit, and with a resume as impressive as his, he has the exact mentality needed for success.

“A lot of it comes down to personality and looks and everything,” Preece said. “As far as a racing standpoint and having a resume, I think I have a pretty good resume. I won a championship every year for the past three years, and I have won 10-15 races for the past three years. I’m just trying to be the best racer that I can be and hopefully things work out.”

This Week In Ford Racing

Roundtable - The future of Charters in NASCAR