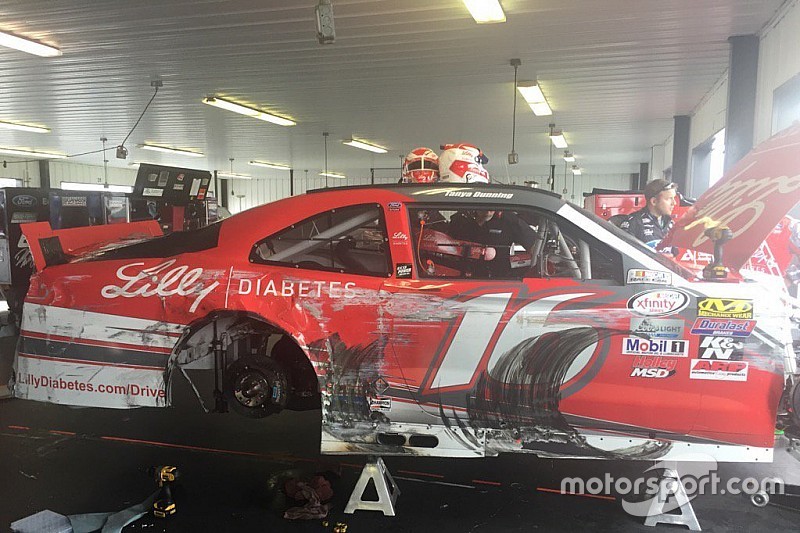 Ryan Sieg and Ryan Reed got into it after an incident on track.

Early in the going, the two drivers had a coming together that ended with Sieg in the wall. Sieg, who serves as both an owner and a driver, was far from pleased with what took place. Later on Lap 39, Reed wrecked out after a heavy impact with Jeremy Clements.

In the garage, Sieg went over to show Reed his displeasure, which ended with a lot of pushing and shoving.

"(Reed) kept jabbing off with his mouth so I figured I'd shut it up for him."

He added, "You can't race the kid, he's got a lot of money and he's got a Roush car, but he can't drive it. Just an idiot. Everywhere he goes, it seems like he's always in a wreck.

Sieg was surrounded by Roush Fenway Racing crew members as the confrontation intensified and when Motorsport.com asked where his own crew were, he said, "We only had four against 20 ... Just outnumbered."

Sieg further explained his disappointment, revealing that the car damaged today was supposed to go to Michigan next weekend.

"It's pretty bad. It's not going to make it to Michigan and that's the Michigan car. We're going to have to thrash to get another one ready.

"We had a really good car, but just sucks to get torn up here and in the garage and have nothing to show for it. Either he can't see or he's brain dead or he can't drive -- Probably all three.

"There's no talking to him, he thinks he does nothing wrong. He hasn't figured it out yet. Still young, I guess ... I don't know."

Reed referred to the incident as just a racing deal.

“Emotions run high obviously, it’s racing,” Reed said. “So, I look forward to talking about it in a calm, cool collected manner and working it out. Obviously we both have to race every week and it’s not going to do us any good to get in a battle royale, but at the end of the day it’s going to take two parties to agree that we need to sit down and have a mature conversation. And when that happens, that happens.

The two drivers had another coming together just last weekend at Charlotte. When asked if this is an ongoing thing between himself and Sieg, he told reporters, "I think he was upset about racing each other hard. I have no problem sitting down and talking about it and working through it. If he's mad at me, I'll listen. We can give each other room or go out there and wreck each other, but I don't see what good that does."