The right rear damage received on pit road slowed Lagasse Jr.'s throughout the day, but managed to run inside the top-20, slipping to 26th late in the race.

DAYTONA BEACH, Fla. - RAB Racing and driver Scott Lagasse Jr. felt right at home Saturday for the DRIVE4COPD 300 at the Daytona International Speedway. Lagasse Jr. from nearby St. Augustine, FL and the No. 29 Florida DOT's 'Alert Today, Alive Tomorrow' Toyota Camry finished in the 26th position after a pit road incident on lap 11. The right rear damage received on pit road slowed Lagasse Jr.'s throughout the day, but managed to run inside the top-20, slipping to 26th late in the race. 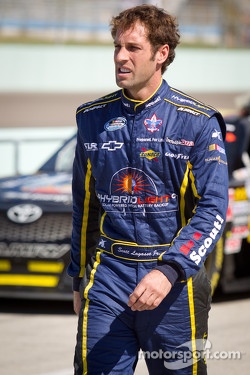 On-track activity began on Thursday as the No. 29 'Alert Today, Alive Tomorrow' Toyota Camry completed the first practice in the 21st position with 27 laps completed. Crew chief Matt Lucas utilized this track time for Lagasse Jr. to get familiar with the new rules package and the team. In the second and final practice session the extra track time paid off, as Lagasse Jr. recorded the second-fastest lap time with seven completed laps. Lagasse Jr. and the No. 29 'Alert Today, Alive Tomorrow' Toyota Camry qualified in the 22nd position after rain canceled the second round of knockout qualifying.

When the green flag flew, Lagasse Jr. quickly started to move his way to the front, making it three-wide on several occasions and breaking into the top-15. The first caution period came out on lap 9 and the No. 29 'Alert Today, Alive Tomorrow' Camry was called to pit road for fuel only. While Lagasse Jr. was in the pitbox being refueled, another car made contact, this contact damaged the right rear corner of the No. 29 'Alert Today, Alive Tomorrow' Toyota Camry and crew chief Lucas brought Lagasse Jr. back in for repairs the next lap. The crew went to work on the body damage, but it was severe enough that it greatly hindered the performance of the car.

The rest of the event Lagasse Jr. worked to regain track position and position himself inside the top-20 for a chance at the end of the race. Lagasse Jr. lost a lap to the leaders when the wounded No. 29 lost the draft, but after the lap 72 caution period for debris, crew chief Lucas decided to stay out and take the wave around to get back on the lead lap. This call paid off as Lagasse Jr. stayed in contention the rest of the event, and took four fresh tires and fuel on lap 96, preparing himself for the closing laps.

Lagasse Jr. worked with his RAB Racing Toyota teammate, James Buescher and climbed to as high as the 13th position with under 15 laps to go. Late race contact on the left side pushed Lagasse Jr. out of the draft, forcing the No. 29 'Alert Today, Alive Tomorrow' Toyota Camry to the rear of the field. Lagasse Jr. finished in the 26th position, on the lead lap.

"What a frustrating day for my RAB Racing team and all the people from 'Alert Today, Alive Tomorrow," said Lagasse Jr. We had a great car, and the team behind it but our hopes at getting the finish we wanted were dashed early with the damage we received on pit road. One of the most aero sensitive parts on the car is the right rear corner, and the damage basically created a parachute, causing the rear of the car to trap air in the back.

This really slowed our progress all day long, it affected the speed at which we could approach cars, and it forced me to change the way I drove the car compared to what we had practiced all week long. Even though we didn't get the finish we were looking for, we did spread the word and remind everyone the dangers for pedestrians and bicycles on the road. I believe we truly made a difference in helping reduce fatalities by staying alert and paying attention on the road."