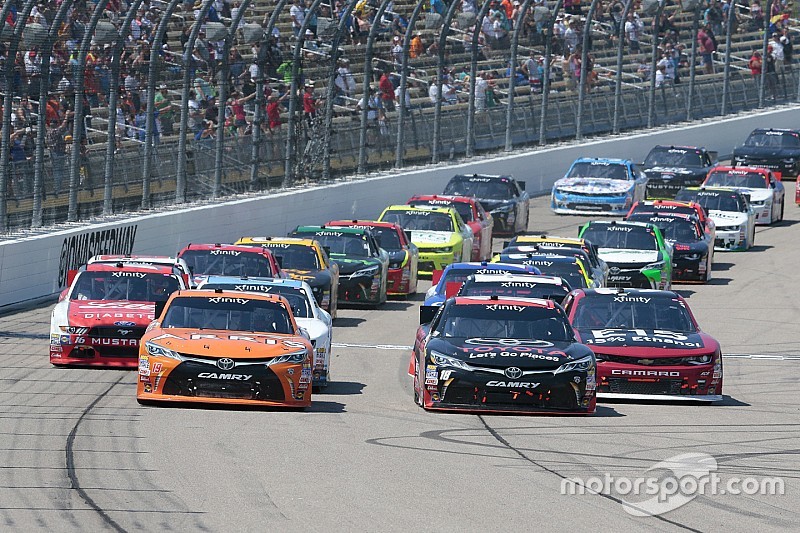 While the NASCAR Sprint Cup Series was off, the Xfinity and Truck teams took to Iowa Speedway for a standalone weekend.

NASCAR released their weekly penalty report today, as well as a change in the rule book for Xfinity and Truck teams.

First off, six Xfinity teams were all hit with P2 level penalties  due to the right side body panel being modified after race inspection.

The teams listed: No. 1 JR Motorsports, No. 7 JR Motorsports, No. 18 Joe Gibbs Racing, No. 20 Joe Gibbs Racing, No. 22 Team Penske, and the No. 88 of JR Motorsports.
All six crew chiefs have been placed on probation for the remainder of the calendar year  (Kevin Meendering, 1; Chris Gabehart, 20; Jason Burdett, 7; Chris Gayle, 18; David Elenz, 88).
There were also written warnings issued to the No. 1, No. 13 and No. 19 cars for failing LIS inspection twice. The No. 16 Roush-Fenway Racing Ford of Ryan Reed failed three teams, so they will lose 15 minutes of practice time during their next race weekend.
On the Truck side, title contender John Hunter-Nemechek has been penalized for failing post-race inspection with the height measurements were outside NASCAR's allowed tolerance.
Crew chief Farris Kennon Jr. has been fined $6,000 and placed on probation through December 31st while both team and driver has been deducted 10 championship points.
Caleb Holman, driver of the No. 75 truck, was assessed a behavioral penalty for approaching the racing surface of a hot track after an accident to show his displeasure with another driver. He has been fined $5,000 and also placed on probation for the remainder of the calendar year.
The sanctioning body has issued a rule book bulletin as well. The change mandates that left-side track bar mounting brackets must be welded to the truck trailing arm. The change is similar to the one made in the Sprint Cup Series prior to Kansas in which series officials mandated the truck trailing arm mounts be welded. This is a proactive move to make sure teams don’t go down the path of trying to gain sideforce through rear skew, which took place at the Cup level.
This rule only affects the NASCAR XFINITY Series and NASCAR Camping World Truck Series.
Next article