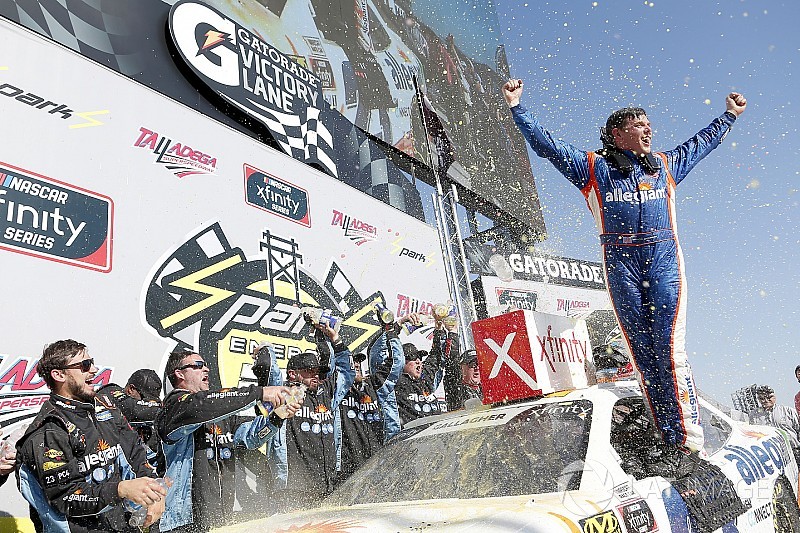 With cars running out of fuel, Spencer Gallagher had plenty and came away with his first NASCAR Xfinity Series victory.

Former race leaders Justin Allgaier and Austin Cindric both ran out of fuel before the start of overtime but once it started, Gallagher took the lead before the start of the final lap and held off Brandon Jones to win Saturday’s Sparks Energy 300 at Talladega (Ala.) Superspeedway.

Justin Allgaier, who ran out of gas as the leader and pit for fuel under the final caution, rallied in the two-lap overtime to finish third. Noah Gragson was fourth and Elliott Sadler, who started the race from the rear of the field, completed the top-five.

Sadler was the top finisher among the four drivers eligible for the Dash4Cash bonus and came away with the $100,000 bonus.

“Awe, man, the only thing going through my mind was, ‘I hope to hell this works.’ I’m so happy right now,” Gallagher, 28, said in Victory Lane. “GMS Racing brought me such an incredible car here. To qualify and run in the race like we did – I knew we had some speed.

“Man, it didn’t seem real for a while. That whole last lap, it was kind of a dream. You hear your spotter in the background but all you’re really doing is looking out your mirror. It’s always wild on the last-lap at Talladega, but we brought it home, baby – we got it done!”

The victory was also GMS Racing’s first in the series and team owner Maurice Gallagher, Spencer’s dad, was on hand to enjoy it.

The four driver who will be eligible for the final $100,000 Dash4Cash bonus this season next weekend at Dover, Del., are Gallagher, Jones, Allgaier and Sadler.

Sadler bolted to the lead with eight laps remaining and held off Gallagher to take the Stage 2 victory.

“We definitely have a fast car. We were able to make some good moves and get some track position,” Sadler said during the break. “This might be the calm before the storm.”

During the break between Stages 1 and 2, Daniel Hemric was the first off pit road and remained in the lead when Stage 2 returned to green-flag racing on Lap 32.

During the pit stops, Ryan Truex was penalized for speeding on pit road and had to restart from the rear of the field.

On Lap 33, Shane Lee appeared to hit Dylan Lupton to trigger a multi-car accident that also collected Ty Majeski and Chad Finchum. Spencer Boyd apparently couldn’t slow down and plowed into the accident, hitting four different cars (including one twice).

“That is just superspeedway racing. Either you are contending for a win or you are out early. Unfortunately for us we are out early,” Lupton said after visiting the infield care center.

“On that restart, the outside line got going really well and we were moving forward and I think (Lee) was behind us and was pushing me a little bit through that high side and then once we started losing banking on the straightaway he pushed a little too much and pinched me sideways and at that point I was just a pinball holding on.”

When the race finally returned to green on Lap 40, Hemric continued to hold the lead followed by Reed and Sadler.

On Lap 42, Sadler moved into the lead for the first time.

Hemric led from start to finish to claim the Stage 1 victory, his second stage victory of the season.

Just before the conclusion of the stage, Christopher Bell fell off the pace with a left-rear flat tire. He nursed his car around the track so as not to face a penalty for pitting while pit road was closed.

Hemric, the pole-winner, wasted no time in taking early command of the race.

With 20 laps left in the stage, Hemric continued to hold the advantage out front, followed by Allgaier and Reddick.

Jeremy Clements fell off the pace with a fuel pressure issue seven laps into the race and was warned by NASCAR to pick up his speed.

With 10 to go in the stage, Hemric stayed out front followed by Allgaier and Reddick.

Three cars had to start the race from the rear of the field – Sadler for an engine change and Joey Gase and Josh Bilicki for unapproved adjustments during impound.

Five things to watch in Saturday’s Xfinity race at Talladega