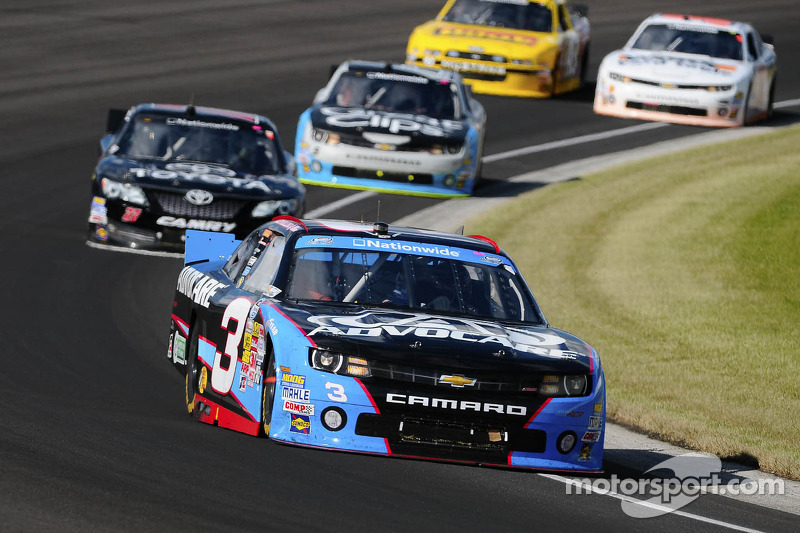 For the first time in his career, Austin Dillon holds the NASCAR Nationwide points lead as they head to Iowa.

Austin Dillon leads the NASCAR Nationwide Series points for the first time in his career – a somewhat surprising statement for a driver who threatens to win an almost weekly basis.

But it’s true. Austin Dillon used a 12th-place finish at Indy to move into the points lead for the first time, and becomes the third different leader in as many weeks.

Two races previous, Regan Smith held a slight five-point advantage over Sam Hornish Jr. with Dillon seven points further back. Then after a runner-up finish at Chicagoland the following weekend, Hornish leapfrogged over Smith to take a seven-point lead over Smith with Dillon eight points back.

It’s now Dillon’s turn to carry the banner as the series returns to Iowa Speedway for the U.S. Cellular 250 Presented by Enlist Weed Control System. He leads Smith and Elliott Sadler by six and 13 points, respectively. Hornish dropped to fourth in the points, one marker behind Sadler. 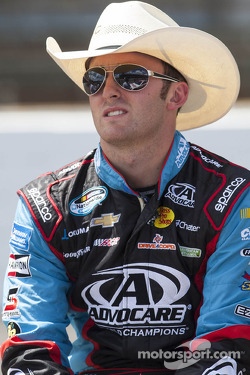 Dillon, who has four finishes in the top three but is still looking for his first win, returns the No. 3 Chevrolet to the points lead for the first time since Dale Earnhardt Jr. won the season-opening race at Daytona in 2002. It’s been since 1999, however, that the No. 3 was atop the standings this late in the season. Earnhardt went on to win his second consecutive title later that season.

Could the same be in the cards for Austin Dillon? If Dillon is to keep his perch atop the standings for the remainder of the season, he’ll most likely need to add a victory or two to his resume. His past success at Iowa makes this weekend as good a time as any to make a mark in the wins column.

On his last trip to Iowa back in June, Dillon dominated the race by leading 207 of 250 laps, finishing second to Trevor Bayne. In five other series starts at the 0.88-mile track, Dillon has four top-15 finishes. Additionally, his last two visits to the track with the NASCAR Camping World Truck Series resulted in a win and a runner-up finish.

When Winchester, Tenn., native Ryan Gifford wakes up this Sunday morning he will be awaking after a night that he will never forget – a night where a dream was surely fulfilled.

On Saturday night, the 24-year-old NASCAR Drive for Diversity driver and current NASCAR Next member will make his NASCAR national series debut driving the No. 33 Menards/Rheem Chevrolet for Richard Childress Racing in the NNS race at Iowa Speedway.

Gifford has competed in the NASCAR K&N Pro Series East for the last five seasons and won his first race this past April at Richmond. In 48 series starts, he has compiled 15 top fives and 19 top 10s. He made his only career NASCAR K&N Pro Series West start in 2009 at Iowa where he finished sixth.

He has also driven a dirt late model for Team Dillon Racing, the team owned by Austin and Ty Dillon. In addition to his driving responsibilities, Gifford works in RCR’s shop.

NASCAR Drive for Diversity graduate and current NASCAR Next member Kyle Larson is already proving he has the chops to compete in the series every week. He’s finished in the top 15 in each of the last 11 races, including a fifth-place performance at Iowa in June.

Sometimes crew chiefs go unheralded despite their around-the-clock work and dedication to provide drivers with top-notch race cars and winning race strategies. It is well-known, however, that they are often the glue that holds a championship-caliber team together.

Just like drivers, crew chiefs have their favorite tracks… or at least tracks where they know the exact winning combination to lead their driver and race car to Victory Lane. One of those tracks for Roush Fenway Racing crew chief Mike Kelley is Iowa Speedway.

Over the past five NNS races at Iowa Speedway, Kelley’s drivers have captured four of the checkered flags. Ricky Stenhouse Jr. won both trips to the 0.88-mile track in 2011, and then returned in May 2012 to seize his third consecutive victory there. Then earlier this season, Trevor Bayne drove the No. 6 Ford to Victory Lane.

Stenhouse finished fifth in the August race last year, keeping Kelley from being able to claim five consecutive wins at Iowa. Bayne did not compete in the race.

Michael Annett (Des Moines) and Joey Gase (Cedar Rapids) return to their home state this weekend for the NASCAR Nationwide Series race at Iowa Speedway. … Travis Sauter, whose uncles are Johnny and Jay Sauter, will make his national series debut this Saturday in the No. 87 NEMCO Motorsports Toyota. … Richard Harriman, who competed in four NCWTS races back in 2009, will make his NNS debut at Iowa, while a trio of drivers will make their track debut in the series: Brett Butler, Danny Efland and J.J. Yeley.

Redemption comes to mind for Annett returning to Iowa

Fellows to drive for JR Motorsports at Mid-Ohio

Gallery: Red Bull’s new RB16 up close and on track