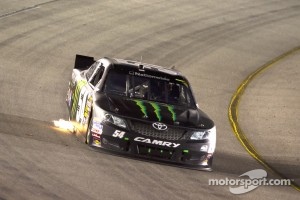 How was your race? "It was a solid night. It wasn't a great night, but it was a solid night. We felt like going into the day we wanted to try a whole different setup and we unloaded that way and when we bridged over to what we won with back here in May it was the same, but it was slower on restarts. It was really weird. I was like, 'Wow, we have improved, but we haven't improved.' We really tried hard to come here with a new setup and move on from May, but we had to go back. And, we went back to that setup and the Monster Energy car just was close, but it wasn't perfect like it was when we were here in May. Just the track conditions changed -- a little of this, a little of that. We just had a brake vibration that couldn't allow me to get to the bottom of the corner easily. I could get there, but a lot of feedback in the pedal and the vibration made it tough to get down to the bottom of the corner. So, when you have that it's tough to race guys exactly clean and you're right on that ragged edge the whole moment. When I had (Kevin) Harvick behind us while we were leading if I could hit it perfect we were going to hold him off. If I was off just a fraction he was right there. When I drove down into (turn) three, the lap car chose inside and I chose inside and I was like, 'This isn't going to be good.' Ninety-nine percent of the guys go high, he went low and I just couldn't stay off him. I had to push hard to try to keep Harvick behind me and I made a mistake and got us behind there."

How was your race tonight? "We were right there. Solid run for us -- wasn't a great run, but a solid run for the Monster Energy car. It's a lot of fun racing with Monster as a sponsor. They want to see us win and we pushed hard tonight and we just couldn't get the car settled down into the corner. Had a brake vibration -- fighting it all night. Made it a little bit too tight, so when I was holding the lead with (Kevin) Harvick right behind us, I think I might have been holding Harvick up a little bit. He had a strong car last week. He came back and got it this week. Those guys are strong and we just didn't want that one slip through our fingers, but Kevin Harvick was the better car tonight. Thanks to Monster, Toyota, Triad engines -- these guys work really hard. This is the hardest working group of guys on pit road and I'm glad they're on my team."

What did you learn in tonight's race that can help you tomorrow? "The biggest thing is just tires. The tires are dropping off a lot, so the pace is hard to gauge at the beginning and you've got to make sure that you don't burn up your rear tires. The Cup cars have much more horsepower, so you're going to see us out there throwing down some blistering lap times early and then the cars are really going to drop off. It's going to come down to a lot of tire management. That's the biggest thing that I learned today."

Do you hope to be in this Nationwide car again next year? "I'm in the Nationwide car here for really I guess the remainder of the season. That was how Kyle (Busch) and I planned it out. Hopefully he's in tomorrow with that 18 Cup car and that's his focus for the final 10 weeks. For me, I'm running the Monster Energy car for the rest of the season and we'll see how things work out from there."

What were you lacking tonight? "Oh gosh, the list is a couple of pages. I just feel like we're a little off right now with our (Joe) Gibbs (Racing) Toyota. I think we need to build a little bit newer, better race cars. Really we came back with the same setup with what we had in the spring and it was really, really fast. Unfortunately, the competition evolves pretty quick and these guys battling for championships, they are building new cars and things like that. We're kind of stuck in the same kind of lull that we've been in. I think I'll go to the Nationwide shop on Monday and talk about some things that I feel like we need to improve on, but overall even when we were at our best we were just a fourth-place car. That's all we had for today and we're going to work on it and get better."

Was your car better on the short runs tonight? "It just seemed like the short run was a little bit better for us. The long run obviously our car went away dramatically. Just fought a little bit of everything tonight. I don't feel like we had a very good car. I just feel like the competition has caught and surpassed us in a lot of areas and we're going to go to work on those things and try to make them better."

Was it a frustrating race for you tonight? "It's so frustrating to know that you can go out there and dominate Cup races and then can't even hold your own in the Nationwide Series. We've got to get better stuff. That's a fact. Everyone knows what we need to work on and we're going to go to work. This is part of the peaks and valleys that you go through with race teams. (Joe) Gibbs (Racing) has done a really good job becoming an excellent Nationwide program for a lot of years, but right now it's got some work to do."

How was your race? "It was fun. We started 20th, come all the way back up -- I didn't mention this on TV, but (Ryan) Blaney, me and him go way back and that was fun. I'm not even mad at him. I'm mad at myself for finishing 10th. We definitely had a top- five car for sure and just got hung out on the outside and that's what happens. We got together and I was trying to catch him. I wanted to beat him so bad. That's the number one guy I want to beat all day. As long as we keep running, that will be that number one goal. It was good. The Dollar General Camry was strong all night. We killed them on pit road. We were getting a lot of spots with that. It was a good day. I can't thank the guys enough at Dollar General and everybody at Joe Gibbs Racing for working their tails off."

What occurred at the end of the race? "Me and (Ryan) Blaney were racing hard, as always, and he just got a little loose on the inside of me and knocked me up the track and I'm not mad at him for that. That's just good hard racing. Just to come home 10th for me feels like a 20th. Everybody back at Joe Gibbs Racing worked their tails off and I can't thank Joe Gibbs Racing enough."

Are you mad at Ryan Blaney? "I love that kid (Ryan Blaney). He's like a brother to me and we know how to run each other hard and clean. We get into each other, but come out shaking hands, so that's what racing is all about."

Did you learn anything in tonight's race? "Every race we've been strong. Just lacking on my end. I learned some stuff behind Denny (Hamlin). I got by him, so that's the plus side of it -- I got by Denny Hamlin here at Richmond, his home track, so that's cool. I can't thank the guys enough at Dollar General for coming on board."

Harvick takes the win at Richmond for RCR