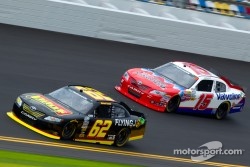 Can you talk about your race? “We were pretty good, better than I thought we were going to be today. It seemed like we were a little bit off on speed all day yesterday. We got a little bit of that back today. I’m proud of everyone on the Interstate team. This is a new team and new crew chief and everything, so for me it’s a good experience to try to get this team on track.”

Did the race come down to fuel mileage strategy? “We just really had the wrong strategy there. We knew it was going to be close. I knew some guys were going to stretch it to make it. You just hope that it doesn’t come down to that and it did.”

How was your race? “It looked like we had ourselves a 13th place car all day and at the end we were 14th on the end of the lead lap and Scott (Zipadelli, crew chief) called a hell of a race. My car was better on the long runs, I couldn’t go real fast on the short runs. I got up to like 11th and then they said, ‘Okay, you have to save fuel.’ They told me I had to let off a second a lap. So, I was running like half to three-quarter throttle. Two weeks in a row a top-10. That was the hardest thing I had to do, was let two cars pass me. It was a deal where we could have probably finished eighth or ninth, but we might have ran out of gas. The pay off was to get a points base laid down and get the year rolling, so this should help.”

Did you stop for fuel in the closing laps? “No, we stopped for fuel on the very last pit stop and packed it full of fuel. We were a 13th place car, but we got 10th on fuel mileage. We gave up probably ninth to slow up. There was a lot of Toyota technology that went into this. That’s what my wife tells me at least. She said all the engineers were down in our pits really helping us. We’re an underdog team. If it weren’t for the Toyota research and the two or three engineers running around during the weekend -- I feel like Rocky Balboa. I told everyone I’m going to run good this year because I have a good car. I think we have a top-15 car and if we do everything right, then we turn into a top-10 car. As the year goes on, if we do everything right we might win one. Right now, we’re here. Man, Kenny Wallace got two top-10s on the lead lap.”

How was your car in the race? “We had a really good car, unfortunately it came down to some people didn’t have to stop. The number is not the number we want but we know how well we ran and these guys know. I made a couple mistakes on pit road, two today and you have to get used to racing again and making up time in the right spots. Making up time in the right spots to help us rather than hurt us. It was fun to be up there all day. We ran a lot better than the numbers are going to show. That’s just a fuel mileage deal.”

Does having a strong performance give you confidence for the upcoming races? “Definitely, any time you can drive around these Cup guys in the cars that you see in the top-five every weekend throughout the race. If you’re passing them, you might not beat them that day but you know you have the car that can. It’s just putting everything together and I’ll do better on my part. The team, they were right there today, I don’t know if they can do much better.”

What happened to take you out of the race? “I just got a really big run off the top side and switched down to the bottom and thought I had a clear track down there and then the 22 (Brad Keselowski) came down a little bit to block. I didn’t want to run into him so I gave him a little more room and got into the grass. I knew you’re not supposed to get in the grass, I’m not that stupid. I thought I could hold on to it at least and then once we got sliding through the grass there, I tried to lock it down and get it back straight and got into the inside fence. Another tough day in Vegas.”

Can you take us through what happened on the race track? “I had a really big run off the top and I didn’t want to go to the outside, I wanted to kind of get down and be on the bottom so I could get into the white line in turn one. I didn’t even make it that far. I got to the bottom of the 22 (Brad Keselowski) I guess and he came to block a little bit. I didn’t want to run into him so I went into the grass and I know the grass typically doesn’t work so I looked kind of stupid doing that. Tried to hang onto it, and just couldn’t get it back straight in enough time and got into the inside wall. I hate it for the guys and all the guys at Z-Line Designs and everybody that was out here cheering for us today. Unfortunately I screwed up and that’s why I run these races -- so I can learn and not do it tomorrow.”

Would you have taken four tires on that last pit stop if you could redo that stop? “Yeah, it was a point in the race where we needed to do that. It doesn’t matter that we were back that far, you still have 70-something laps to go. I just thought I have a great opportunity, a big run here I might as well capitalize on it and get past two cars while I can right now and not waste any more time then I have to.”