They work hand-in-hand on the K&N Pro Series East and NASCAR Nationwide program to make sure Pastrana has a successful season and career. However, this isn’t the first time Greci and Zipadelli have worked together to help groom up and coming talent.

The Connecticut natives have history going all the way back to 1985 but they really started turning wrenches together in the early 1990’s. Greci began running a NASCAR K&N Pro East Series team for drivers Mike McLaughlin and Mike Stefanik. Zipadelli worked under Greci as the pair won two K&N Pro Series East championship.

After their success they both went their separate ways, but they have reunited work with Pastrana. 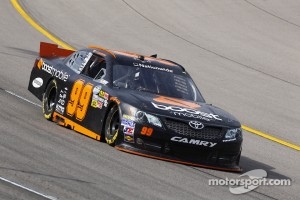 Greci on Zipadelli: “Scott and I have known each other for a long time. In fact, I use to work with him and his brother Greg. We are more like family. We all worked together back in Connecticut in the NACAR Busch North Series. We had a lot of success working together. It has been fun working with him so far this season. We can bounce ideas off each other and come up with a plan that we think will work best for Travis.”

Zipadelli on Greci: “Greci and I go all the way back. He use to work with my uncle when I first meet him. Then I started working with him when he started the NASCAR Busch North team. We are more like family then co-workers. It’s been great to reunite with him and work together on the Pastrana program. He has worked with Pastrana for more than a year now so he knows a little more on how he communicates. It’s been beneficial to have him around.”

Pastrana on Charlotte Motor Speedway: “I am ready for Charlotte. This will be the biggest track I have ever raced on. I am ready to go fast. I know I am going to have a lot to learn this weekend. I have never raced anything like Charlotte. Matt Crafton is going to be my security blanket this weekend. He knows how to go fast at Charlotte. I need to log all the laps and learn as much as possible.”

• On Top Of the Pit Box: Scott Zipadelli will serve as Pastrana’s crew chief this weekend at Charlotte Motor Speedway.

• Stats: In 11 NASCAR starts Pastrana has one top-five and two top-10 top finishes. He grabbed a career-best finish of fourth last weekend at Iowa Speedway in the K&N Pro Series East race.