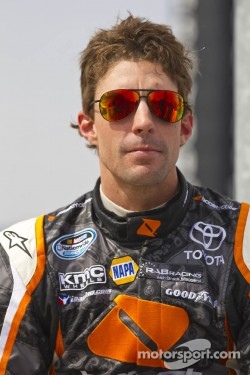 What is your outlook for the Charlotte race? "Definitely looking forward -- this is going to be the fastest course that I've really ran. Darlington was pretty quick. It was definitely a lot more narrow. This track -- at least it seems on TV -- like it has a lot more lines that you can kind of run fairly quick. I was watching the Truck Series last week and it seemed like that top line was preferred, which is a little different than the tracks we've been racing. Just ready to get out here. Every time we're in the car, I learn a lot. Even if the results aren't always going forward or we have trouble here and there, it's just learning to talk to the team. When I say, 'Hey, I'm a five tight or a 10 tight,' they adjust it right when I'm out there and knowing what that is is very important. We're getting more and more prepared for the future."

Are you focused on trying to beat Danica Patrick in the races? "I probably get about 20 texts from all my friends every time. There's been at least one girl that's beaten me at every round so far. Definitely, I haven't heard the end of it. For me, the biggest focus right now -- I just want to learn how to drive these cars competitively. One time I don't want to get lapped by this guy sitting to my right (Ricky Stenhouse Jr.) -- that would be great. We finished on the lead lap at Darlington, but only because there were so many cautions that came out the last couple laps. We're not far off where we want to be, but I'd really like to get up there, get a little quicker, get qualified a little better - - this last weekend we qualified better than we did the first two weekends. Definitely a goal is always to avoid criticism from my friends, but there's a lot of really good drivers. Danica (Patrick) -- as much as people give her a hard time or this and that, she's better than I am, so I'm working on it."

How do you look at the other action sports athletes that have come over to NASCAR? "It's been really neat for action sports and from a media perspective to follow people like Ricky Carmichael when he came over. I got to really watch his progression up through the K&N Series and into the truck stuff. Every now and then he would have a great race and I would call him and be like, 'Why were you battling Kurt Busch this weekend and the next weekend you're four laps down?' I didn't understand until you get out there racing and then it's like, 'Oh, okay.' So much more respect for the guys that are on top every weekend. They might not have the car that's as good this weekend, but they find a way to make it work. I've got a hammer and I've been hitting that hammer every race. When it's working well, it's great, but when it's not I have to figure out how to use some different tools."

What has your wife thought of your performances in the Nationwide races? "She (Lyn-Z Pastrana, wife) does and actually the Nitro Circus, they announce it if I get beat by a girl and I have every time during the Nitro Circus live shows in Australia. They try to humiliate me all over. Lyn-Z has been doing great. She is probably a better athlete without me around. She's learned a new trick at every single stop they've been to so far. She hadn't learned a lot with me. She's an awesome wife and super supportive, but given this opportunity to kind of go back and not have to worry about taking care of me has been good for her. When I met her, she was a world champion X-Games champion -- she hasn't won either since we've been dating or married, so hope fully this will help get her remotivated there."

What is it like to get in different race cars? "For me, any driver that gets in any car, it doesn't matter if it's a five horsepower Briggs & Stratton or an 850 horsepower NASCAR, you feel real quick coming into the first turn -- you know what the balance of the car is and where the grip levels are. This weekend I've got an all-wheel drive car to race all around the frontstretch and you have to be on the gas all the time. With the K&N car, you can come in sideways. Last weekend, you could stay on the wall all the way in and pull off real late and get it not sideways, but we were doing pretty well sliding the car around. When Ricky (Stenhouse) came by to lap me, I was up by the wall and he shot the inside and I'm like, 'He just drove that thing straight in the corner and it worked really well.' Definitely learning that each car has a bit of a different -- you can drive them differently I guess."

What do you think about NASCAR still acknowledging diversity among drivers? "That might be what the media makes it out to be, but as a driver you're racing as hard as you can to beat -- if there's anyone in front of you, you want to be ahead of them. There's no race, there's no sex -- you're just trying to beat the car in front of you. If other people can get involved, other women or ethnic background -- that's awesome. My job is to try to get to the front."

How has the learning curve been for you? "Last weekend was tough -- made a pretty big mistake. I thought it was electrical and it was a fuel line that was down so the car started back up and I went past the pit lane again and caused a yellow. The guys were like, 'Are you kidding me, another caution right now?' Learning along the way. For me, I want to do better. I want to learn every time, but if I don't crash anybody out and I don't crash myself out and I don't make any really dumb mistakes or anything more dumb than that then I'm going to be learning. I'm going to be there until the end. I'm going to get the laps and get the experiences doing the pit stops and everything else. My goal is still just don't do anything too dumb and try to learn what you can. I want to come into next year and many races to come this year -- we'll set goals that seem a little higher. I'm going to drive as hard as I can, like every other driver on the track. I want to win. Is that realistic? No. When I line up, I'm going to do the best I can to go as fast as I can without taking extra chances. I know that's not like my nature, but I'm just trying to come in here as humble as I can. I understand it's not going to happen overnight so I need to get the track time and I need to get the experience out there."

Does it surprise you that fans come to see you at NASCAR races? "Samsung and Boost Mobile are banking on that. We've got a long way to go to get up front. As far as everyone thinking we are going to bring other people into the sport or this and that, I say, 'Maybe, but no one is going to follow me unless I figure out how to win.' My goal and my team and everybody that's backing me are not backing me to go out there and make a show. They want me to go out and learn as much as I can, but they are backing me because they believe that one day I can be up there battling. That's where I want to be and that's where my focus is. Hopefully, it's bringing people to the sport, but that's not really -- I'm here to race."