Heading into the second two-lap overtime, Gibbs lined up fourth on the restart behind leader Ryan Sieg in the outside lane with Austin Hill and Riley Herbst lined up together on the bottom lane.

Gibbs pushed Sieg out front of the field, then A.J. Allmendinger gave Gibbs a shove from behind that allowed him to dive to the inside of Sieg entering Turn 1 on the final lap and cleared for the lead.

Gibbs held off Hill by 0.178 seconds to win the race – his second consecutive and second of the 2022 season. The only lap Gibbs, 19, led in the race was the last one. 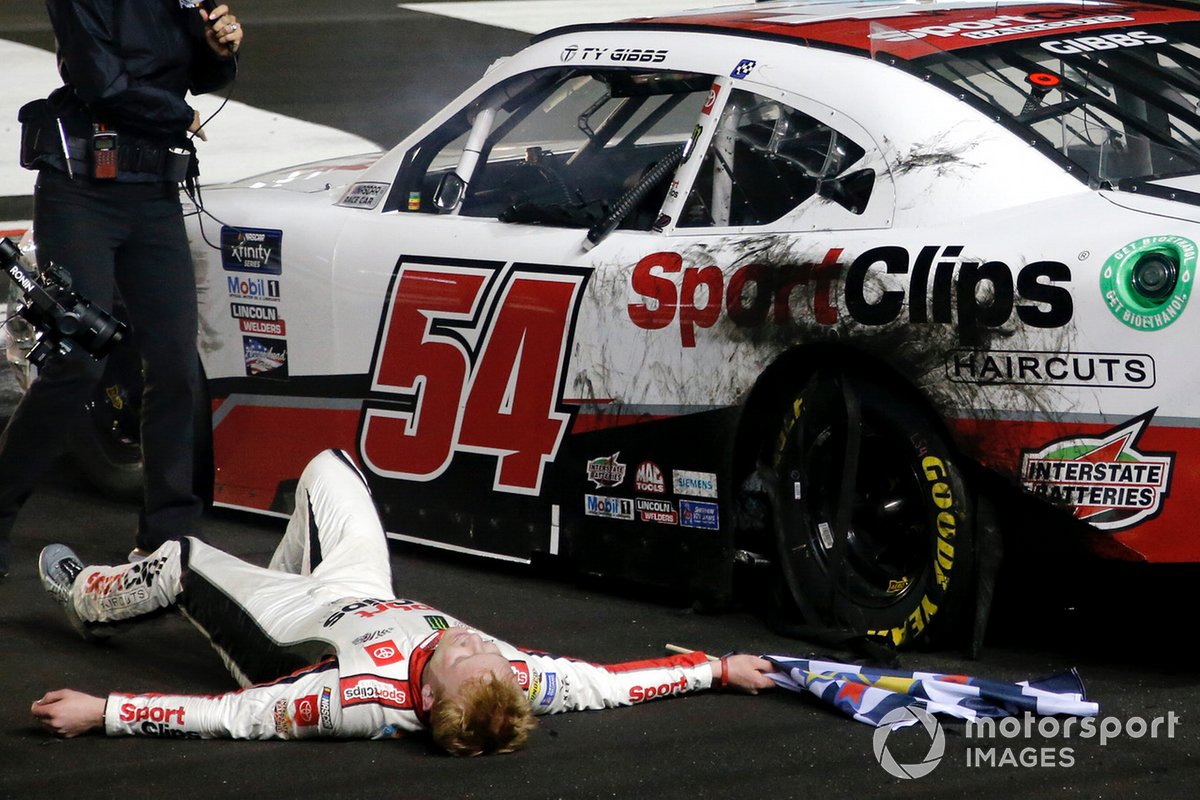 “We came back from 29th and trouble on pit road. The win is awesome, still a lot of things I have to fix and work on, but let’s go, heck yeah!

“I wouldn’t be here without my team. Thank you to A.J. for pushing me. What the heck? That was so cool. I learned a hard lesson – just never give up.”

Allmendinger ended up third, Herbst fourth and Landon Cassill rounded out the top-five.

Following the break between Stages 2 and 3, most of the lead-lap cars pit with Creed the first off pit road. On the restart on Lap 89, Creed was followed by Hill, Trevor Bayne and Allmendinger.

Daniel Hemric and Brandon Brown both ran over the choose cone and had to restart from the rear of the field.

On Lap 99, Bayne got a shove that sent him past Creed and into the lead for the first time in the race.

Snider then got around Bayne on Lap 101 only to see Bayne reclaim the lead on Lap 103.

A handful of cars elected to pit but Bayne stayed out and in the lead when the race resumed on Lap 113. He was followed by Gibbs, Hill, Creed and Jones.

On Lap 114, Daniel Hemric and Joe Graf Jr. made contact while racing for position, which did considerable damage to Hemric’s No. 11 Chevrolet.

The race returned to green on Lap 123 with Bayne out front followed by Gibbs and Hill.

Sam Mayer spun on Lap 129 to bring out the sixth caution of the race. The race resumed on Lap 134 with Bayne still out front.

Creed got into Brown on Lap 139 and sent him spinning off Turn 4 to bring out another caution as Hill moved into the lead.

On the restart on Lap 144, Hill was followed by Bayne, Allmendinger, Gibbs and Cassill.

While trying to return to the lead on Lap 153, Trevor Bayne cut in front of Allmendinger and then hit the wall and then getting into Josh Berry and Noah Gragson. In all, 12 cars were involved in the incident.

Following the extensive cleanup, the race returned to green on Lap 161 with Hill out front, followed by Sieg, Allmendinger, Myatt Snyder and Cassill.

With Snider’s No. 31 car blowing sparks out the bottom as it took the green flag, it didn’t get quite get up to speed and Herbst ran into the back of him and spun him off the track to bring out another caution.

At the start of overtime, Hill led followed by Sieg, Herbst, Gibbs and Allmendinger.

On the first lap of overtime, a multi-car wreck erupted which dumped fluid all through Turn 1 and immediately forced a red flag.

After the 12-minute delay, the race went into a second overtime with Sieg leading the way.

Allmendinger held off Hemric to take the Stage 2 win.

Buford was third, Tommy Joe Martins was fourth and Sage Karam rounded out the top-five.

Following the break between Stages 1 and 2, most of the lead-lap cars pit with Berry the first off pit road. Jones was penalized for speeding and had to restart from the rear of the field.

On the restart on Lap 48, Allmendinger – among those who stayed out – led the way, followed by Buford and Cassill. Berry lined up 15th.

On Lap 51, Gragson slapped the wall with the right-side of his No. 9 Chevrolet as the field went four-wide. He was eventually forced to pit under green.

Herbst was also forced to pit under green with overheating issues on his No. 98 Ford.

With 20 laps to go in the stage, Allmendinger held a small lead over Hemric as Buford ran third.

Berry got inside of Gragson off Turn 4 on the final lap and earned the Stage 1 victory by 0.300 seconds.

Allgaier was third, Mayer fourth and Bayne rounded out the top-five.

Gragson started on the pole and led every lap until NASCAR threw a competition caution on Lap 22.

A handful of cars pit but Gragson remained on the track and in the lead when the race returned to green on Lap 27. He was followed by Jones and Gibbs.

With five laps remaining in the stage, Gragson maintained a small lead over Jones as Berry ran third.

Three playoff contenders in the NASCAR Xfinity Series were taken out in a huge nine-car wreck at Texas Motor Speedway on Saturday.

On much older tires, Noah Gragson fended off a furious charge from Brandon Jones and held on to win Friday night’s NASCAR Xfinity Series race at Bristol (Tenn.) Motor Speedway.