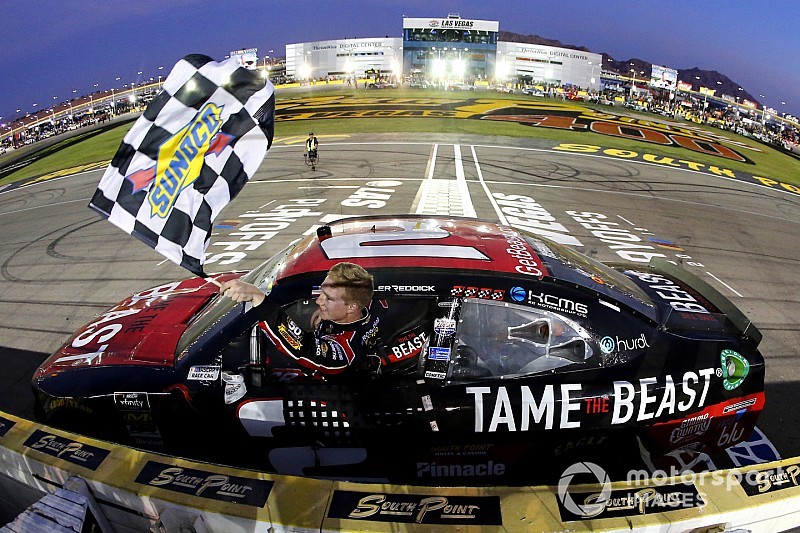 Tyler Reddick went for a big gamble in Las Vegas and it paid off handsomely.

The win is the fifth of the season for Reddick, the reigning series champion.

“It was nerve-wracking to say the least the last few laps I started losing fuel pressure. It was tumbling,” said Reddick, who ran out of fuel attempting a burnout on the frontstretch. “Christopher Bell had a real fast race car.

“We came in for fuel and tires and had to save a lot and it allowed us to run some really, really fast laps there before we had on tires at the end to keep us out front. Our car was fast on the long run and that’s what we needed to get a buffer at the end.

“We’ve had a really, really fast car here in the past. Today we didn’t have it but we got them on strategy again.”

Bell, who led 154 of the 200 laps, finished second, Brandon Jones was third, Cole Custer was fourth and Justin Allgaier rounded out the top-five.

On Lap 112, Tommy Joe Martins spun off the exit of Turn 4 to bring out the first non-stage caution of the race. After pit stops, Bell came off pit road first and led the way on the restart on Lap 117.

Allgaier worked his way around Bell off Turn 2 to take the lead as Bell dropped to second and Custer ran third.

On Lap 126, Bell ran down Allgaier on the inside of Turn 3 and retook the lead.

Two laps later, C.J. McLaughlin wrecked off Turn 4 to bring out another caution. The race returned to green on Lap 134 with Bell in the lead followed by Allgaier and Custer.

On Lap 142, Briscoe got around Allgaier and moved into the second position.

With 40 laps remaining in the race, Bell held a 4.5-second lead over Briscoe while Jones had made his way up to third.

Several drivers made their way to pit road on Lap 167 to begin a final round of green-flag pit stops to get new tires and fuel to make it to the end of the race.

During the stops, Briscoe was penalized for speeding on pit road and had to return to pit road to serve a pass-through penalty.

By Lap 181, Bell had cycled back up to second, but Reddick remained out front, trying to stretch his fuel to the finish without making a final stop.

With 10 laps to go, Reddick still held an 8-second lead over Bell but Bell was told by his team they didn’t believe Reddick could make it.

Once again Bell made short work of the field, leading all but two laps on his way to the Stage 1 victory over Allgaier.

Custer was third, Briscoe fourth and Reddick completed the top-five.

Following the break between Stages 1 and 2, all of the lead-lap cars elected to pit with Bell the first off pit road.

On the restart on Lap 52, Bell led the way followed by Allgaier and Custer.

Cindric was penalized for an uncontrolled tire penalty and had to restart the race from the rear of the field.

Allgaier got around Bell to take the lead on the restart only to see Bell get it back before the conclusion of the lap.

With 30 laps to go in the stage, Custer moved up to second and began challenging Bell for the lead.

On Lap 80, Allgaier finally ran down Custer to retake the second spot as Custer dropped to third.

Bell led from start to finish in the first 45-lap stage, easily holding off Allgaier for his 14th stage win of the season.

Reddick was third, Cindric fourth and Custer completed the top-five.

Custer started on the pole but Bell worked his way around him to take the lead on the first lap.

Ten laps into the race, Bell held about a half-a-second lead over Allgaier as Custer ran third.

With 25 laps remaining in the first stage, Bell had opened a 2.4-second lead over Allgaier. Custer was third, Cindric fourth and Reddick fifth.

After 35 laps, Bell’s advantage had ballooned to 5.4 seconds over Allgaier as Reddick moved up to third.

Kyle Weatherman had to start the race from the rear of the field because his team made an engine change in his No. 74 Chevrolet.