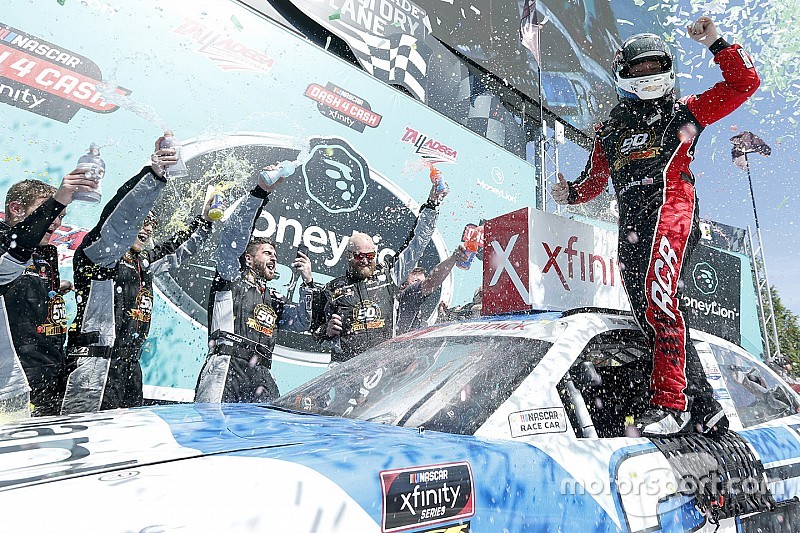 Tyler Reddick was all over the field in Saturday’s NASCAR Xfinity Series race but most importantly in Victory Lane at the finish.

Reddick, blocking both to the left and right on the final lap, held off a furious charge from Gray Gaulding to win Saturday’s MoneyLion 300 at Talladega (Ala.) Superspeedway.

It’s the first win of the season for the reigning series champion and didn’t come easily, as Reddick had to overcome a pit road speeding penalty and run-in with the wall during the race.

As the top-finisher of the four qualifiers, Reddick also claimed the $100,000 Dash4Cash bonus. He, Gaulding, Bell and Briscoe will compete for another bonus next weekend at Dover, Del.

“Hell of a job by all our guys at Richard Childress Racing,” Reddick said in Victory Lane. “I tried to take us out of this race so many times and somehow we could back in the mix, got back in the lead.

Gaulding said he timed his final move “perfect” but just came up a little short.

“I was kind of a lone ranger out there, I think I just had to earn a lot of people’s respect,” he said. “I left it all out on the table. I did as much as I could to get beside (Reddick).

“When (Briscoe) came up, he kind of blocked my run and it was so, so close. Every single lap I get in this car, I drive my heart out and today it almost worked out.”

A caution was displayed on Lap 66 of 113 for two large pieces of debris between Turns 1 and 2, likely from when Ray Black Jr. tagged the wall.

All of the lead-lap cars elected to pit with Bell the first off pit road. David Starr elected not to pit and led the way on the restart with 42 laps remaining. Bell lined up second as the first car that pit.

Bell moved into the lead for the first time in the race shortly after the restart.

Just after Justin Allgaier grabbed the lead, Noah Gragson spun on the frontstretch on Lap 85 after contact with Reddick to bring out a caution.

On the restart with 22 laps to go, Allgaier remained out front followed by Briscoe, Bell, Cole Custer and Michael Annett.

Briscoe powered to the lead shortly after the restart with Bell moving into second.

On Lap 95, a multi-car wreck erupted on the backstretch involving Cindric, Annett, Allgaier, Custer and Stephen Leicht. The incident began with Annett attempting to block Cindric and the two made contact.

When the race returned to green on Lap 100, Briscoe led the way, followed by Bell, Cindric, Reddick and John Hunter Nemechek.

Bell moved into the lead with a push from Cindric on the restart.

Reddick grabbed the lead just before a caution was displayed on Lap 102 for a large piece of debris off Turn 4. On the restart with seven laps to go, Reddick led, followed by Briscoe, Bell, Jeffrey Earnhardt and Brandon Jones.

With five laps to go, Earnhardt made it four-wide and got into Jeremy Clements and Allgaier in Turn 2, which triggered another multi-car wreck and brought out a red flag to clean the track of debris.

The race returned to green with two laps remaining and Reddick still in the lead.

Gragson remained out front of Allgaier to take the Stage 2 win, the first of Gragson’s Xfinity career.

Ryan Sieg was third, Briscoe was fourth and Ross Chastain completed the top-five.

Following the break between Stages 1 and 2, several cars elected to pit but Allgaier stayed out and took over the race lead.

Chastain, Reddick and Justin Haley were both penalized for speeding on pit road and had to restart from the rear of the field. The race returned to green on Lap 21.

On Lap 32, Brandon Brown and Nemechek were penalized for locking bumpers and both had to make a pass-thru penalty.

Gragson got ahead of Allgaier to take the lead for the first time on Lap 33.

With 10 laps remaining in the second stage, Gragson remained out front followed by Allgaier and Briscoe.

Teammates Gragson and Allgaier remained out front with five laps to go in the second stage. They were followed by Briscoe, Custer and Sieg.

Reddick held off Chastain to take the Stage 1 victory, just his second stage win of the season.

Cindric was third, Sieg was fourth and Gaulding completed the top-five.

Reddick grabbed the lead on Lap 1 and remained out front through the first five laps of the stage, setting a blistering pace.

On Lap 7, Brandon Jones spun in the tri-oval, bringing out the first caution of the race just after Chastain took over the lead for the first time. Allgaier, Bell and Gragson were among those who elected to pit under caution

On the restart on Lap 12, Chastain led the way, followed by Reddick and Haley. One lap later, Reddick moved back out front.

With 10 laps remaining in the first stage, Reddick remained out front followed closely by Sieg, Chastain and Cindric.

With five laps to go in the first stage, Reddick was fighting to hold off Chastain for the race lead.

Before the start of the race, three cars had to start from the rear of the field – Leicht for unapproved adjustments, Cody Ware for a transmission change and Nemechek for a tire change.

Kaz Grala prepares for big weekend with RCR at Dover