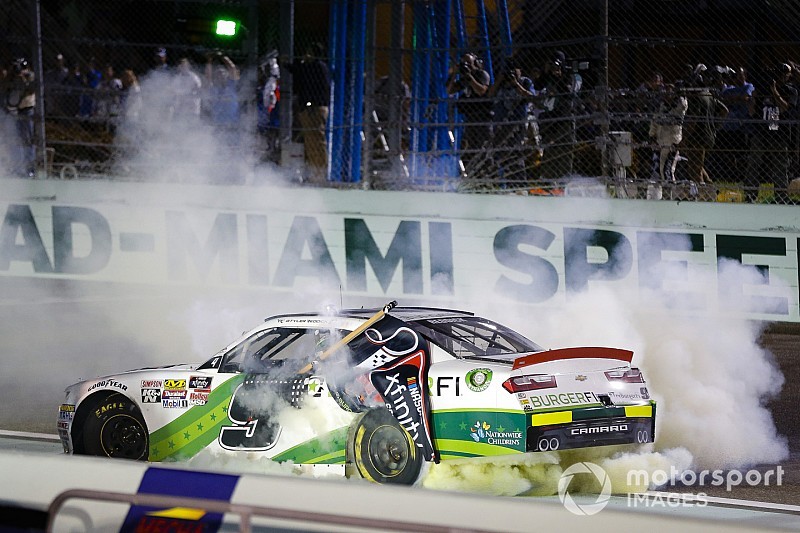 Tyler Reddick bookended the 2018 Xfinity Series season with victories and in the process became an unexpected champion.

Reddick began the year with a victory in the season-opener at Daytona and didn’t win again until Saturday night’s season finale Ford 300 at Homestead-Miami Speedway.

The impressive victory over fellow title contender Cole Custer, however, handed Reddick the series championship in his rookie season. It’s the second consecutive title for JR Motorsports and third in the last five years.

"I just knew we had to execute. I thought we had a chance if we just made it to Homestead, It rewards my aggression," Reddick said after the race. "Tonight, we hit the wall a lot but the car kept in one piece, enough for me to get to the end.

"These guys worked so hard on this No. 9 Chevrolet. We had to overcome a lot. This year was all about just learning - it was an up and down year. We did everything we had to do in the playoffs and we wound up with the championship.

"We can hang our hats on that and people wills say others were more consistent, we got it when it counted."

Asked if doubted he would make it to the Championship 4, Reddick said, "I knew this team could make it to Miami. Justin Allgaier, Elliott Sadler and Michael Annett had speed all year long. It was just a matter of executing.

"I picked a really good time to get my life together and win another race."

Reddick, 22, came into the championship race as an underdog, with Christopher Bell – who led the series with seven wins this year – as the heavy favorite.

Reddick's team owner, Dale Earnhardt Jr., said of Reddick's performance: "I'm telling you, to run on that fence at the end of the race like he did, that takes some precision, he did an amazing job and he earned a victory tonight and he earned a championship."

On Lap 142 of 200, Bell headed down pit road to start a final round of green-flag pit stops. Reddick followed soon after. Hemric was the third title contender to pit, on Lap 147. Custer was the last to pit on Lap 147.

Once the cycle of stops were completed on Lap 149, Reddick took over the race lead. Bell ran second, Custer fifth and Hemric seventh.

Bell got around Reddick on Lap 155 to take the race lead for the first time. Nemechek ran third and Custer fourth.

Custer passed Nemechek for third with 40 laps to go as Bell maintained a small lead over Reddick.

With 36 to go, Reddick moved to the outside of Bell to retake the lead as Custer moved into second and Bell dropped to third.

Reddick held a more than 2.5-second lead over Custer with 30 laps left in the race.

With 10 laps to go, Bell was forced to pit under green with a flat right-rear tire.

Custer maintained his dominance leading all green-flags on his way to the Stage 2 victory.

Following the break between Stages 1 and 2, all lead-lap cars elected to pit and Custer was the first off pit road. He remained in the lead when the race returned to green on Lap 52. Reddick was second and Bell third.

Shortly after the restart, Nemechek powered his way into the second position as Reddick dropped to fourth.

With 30 laps remaining in the second stage, Custer held a small advantage over Nemechek with Bell running in third and Cindric moved into fourth.

Bell got around Nemchek with 25 laps left in the stage to take over the runner-up spot as Hemric ran in fifth and Reddick dropped to seventh.

With 20 laps left, Custer held a 1.6-second lead over Bell as Hemric took over the fourth position.

With 10 laps remaining in the stage, Custer held a 1-second lead over Nemechek as Bell dropped to third and Hemric was close behind in fourth.

Nemechek was able to close the gap with Custer to under a second with four laps to go in the stage as Hemric continued to battle Bell for third.

Custer jumped out front from the start and led all 45 laps to earn the Stage 1 victory.

Hemric ended up second and Reddick was third as title contenders swept the top three positions. Justin Allgaier was fourth and Nemechek was fifth.

Custer, the pole-winner, took early control of the race, running out to a 1.7-second lead through the first 15 laps of the race. Reddick was second and Hemric running third.

With 20 laps remaining in the first stage, Custer had built up a more than 2-second lead over Reddick with Hemric running in third. Bell, the fourth title contender, was fifth.

Custer maintained a 2-second lead over Reddick with 10 laps left in the stage. Hemric continued to put pressure on Reddick for the second position. Bell had dropped back into sixth.

With six laps left in the stage, Hemric finally got around Reddick to take over the runner-up position.

Christopher Bell: "I wasn’t good enough" to win at Homestead