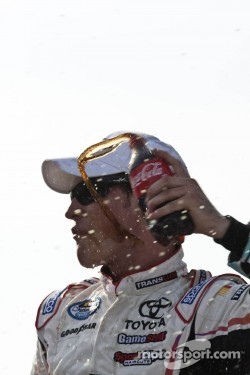 Toyota drivers led 110-combined laps (of 151) at Darlington with Hamlin leading a race-high 103 laps, Logano pacing the field for four laps -- including the final two -- and Busch in front for three laps.

The win was Logano's second consecutive victory and third in the 2012 NNS season in eight starts.

JOEY LOGANO, No. 20 Dollar General Toyota Camry, Joe Gibbs Racing Finishing Position: 1st What happened on the restart with Elliott Sadler? "I was trying to push him, trying to help him. We did it the restart before that -- I was able to push him ahead and get ourselves in first and second. It was the same game plan, trying to do the same thing. Older tires and his car wasn't really good all through the gears -- he spun his tires a lot. It got me stuck on him and I was trying to get off him when I saw him getting crossed up, but I couldn't backup enough. I feel terrible. We worked so good together in Talladega last week and I was trying to help him again here. It was one of those racing deals -- it's tough. I apologize for it, but we were trying to win the race -- both of us were trying to win the race. It is what it is, unfortunately, but it's still cool to get Dollar General in victory lane. That's the exciting part for us. Two wins in a row. Dollar General has had a tough run with us at JGR (Joe Gibbs Racing) for a while right now, so exciting to get them in victory lane." How much did the race track change during the race? "We were tight the first round, and then we were loose the rest of the race. It just seemed like it changed a lot as the sun went down and once the sun went down, it just kind of stayed the same. We were able to learn a little bit for tomorrow. It's cool -- it's Darlington. This is a cool race track and to win here is cool." Was it difficult to collect yourself after the incident with Elliott Sadler and go on to win the race? "I figured out under caution what I had to do to win this thing on the last restart. Plus I had Brad (Keselowski) behind me pushing me like crazy. That's what I was trying to do to Elliott (Sadler) and Brad just didn't get me crossed up. It's still cool -- two in a row. Darlington, this is such a cool place to win, the history here and all -- it's just so awesome. This was Toyota's 201st win in NASCAR, so that's really cool. It's just awesome, I'm excited about it."

Did you have a 'sinking' feeling about what happened between you and Elliott Sadler? "Yeah, your heart drops. You know he's running for points, you know the championship is really close between him and the 6 (Ricky Stenhouse Jr.) and you don't want to be the guy that does something like that. You want to race the guys that are racing for points -- you want to race them with a lot of respect. We're all out there trying to win the race. No point in my mind was I like, 'Man I'm going to wreck him to win this.' That was never going through my mind. I don't want to win races that way. It's bittersweet. I didn't do a burnout or anything like that -- I was just going to drive into victory lane. Your heart drops a little bit, but at the same time, you have to find a way to put it behind you and go out there and do your job and win the race."

Have you talked to Elliott Sadler or do you plan to? "Yeah, I left him a message. I haven't seen him. I'm going to try to find him after this." ADAM STEVENS, crew chief, No. 20 Dollar General Toyota Camry, Joe Gibbs Racing Finishing Position: 1st How did the pit crew contribute to the Darlington victory? "We unloaded pretty darn far off trying some different stuff this weekend. We had to do a lot of work on it in practice. NASCAR gave us an extra set of tires this week in practice, which was a benefit to everybody, but a benefit to us. We were showing cords on our third run of practice and had to change tires. We would have been lost without that this weekend. That let us get a little bit more aggressive on making changes to the car, making it better. I really felt like at the end of practice we had something we could race with and had a direction to go to make our race changes. I feel like we did that well. I felt like we knew which direction the track was going to go in the race, but I over adjusted on the first stop and got us a little bit behind. We had a good stop and came out second, gave up some of those spots. Then we got stuck behind the 3 (Austin Dillon) on a restart and lost some spots. All in all, I think the restarts were our strength and we had a lull after that, maybe 10 or 15 laps where we couldn't go like the other guys could go. Then we'd have a stretch of laps where we were the best car on the race track. Overall we were close, we weren't quite as good as the 18 (Denny Hamlin), but Joey (Logano) was exceptional on the restarts yet again and we just use that to our advantage."

DENNY HAMLIN, No. 18 Sport Clips Toyota Camry, Joe Gibbs Racing Finishing Position: 2nd What was the green-white-checkered finish like for you? "It's unfortunate. We lost a cylinder I guess under caution because I had it wide-open those last couple laps. I just couldn't do anything. It's a shame. We wanted to get a win for these Sport Clip guys, but tough way to end it."

How was the rest of your race, before you lost a cylinder? "It was just one of those dominant cars. You usually don't win when you have a dominant car and things just didn't work out for us at the end with the cautions and the green-white-checkers."

What happened with Elliott Sadler at the end of the race? "I feel terrible for Elliott (Sadler). Those guys are racing for points. Looking at the restart, I didn't know if I caused it or whatever. It looked like the 20 (Joey Logano) had him jacked up pretty good and he was heading right when he came across our nose. It was a tough day for them, tough day for us. I'm going to get these guys a win one of these days. We just can't keep dominating these races and not win them. I'm proud of these whole Sport Clips team and Matt (Lucas, crew chief) and the guys. They continue to give me great race cars and eventually we will break through that barrier and get them a win."

BRIAN SCOTT, No. 11 Dollar General Toyota Camry, Joe Gibbs Racing Finishing Position: 7th How was your race? "It was the most uneventful Darlington race I've ever had. Uneventful from we didn't get caught up in anything, we didn't get a Darlington stripe, we just played it kind of safe, I guess. We had a bad adjustment. We had to hang on for a really long run -- probably the longest run in the race. We got it back, we got some restarts in the end and were able to get some positions and avoid the wrecks and just brought home a solid top-10. It could have been better, I feel like the performance in our Dollar General Toyota. I'll take a top-10 at Darlington without a mark on the car and go on."

Does a finish like this give you momentum at this point in the season? "Hopefully. We had momentum after our fourth-place finish at California and we subsequently went on to blow up two motors pretty shortly thereafter and that killed our momentum. We feel like we have the engine situation figured out, the guys have identified some weak parts and some things. The JGR (Joe Gibbs Racing) motors are running great now and they're not breaking. Hopefully we can take this finish momentum, go on and we'll just keep building from there and hopefully go on a roll here."

TRAVIS PASTRANA, No. 99 Boost Mobile Toyota Camry, RAB Racing with Brack Maggard Finishing Position: 17th How was your race? "I had a really good time. The guys said, 'People here crash -- we're going to run a little tight, we're a little on the conservative side. You have to get through these races.' To end up on the lead lap in the top-20 -- we weren't driving the fastest, but I tell you what, I couldn't be happier right now."

What was the biggest challenge about racing at Darlington? "It was very, very difficult. We got our stripe in during qualifying. I was pretty nervous coming into the race. I think the guys knew I was nervous. They made me real tight all night which was okay because we stayed out of trouble -- that was kind of the goal, let's keep me from the wall. I had it exactly where I wanted and I turned the fastest lap that I turned in practice and then I spun down the frontstretch and I had all my privileges revoked of how I was going to setup the car."