The NASCAR team discusses Pocono, Kyle Busch criticisms of the aero package despite his success with it and the Xfinity Series title race. 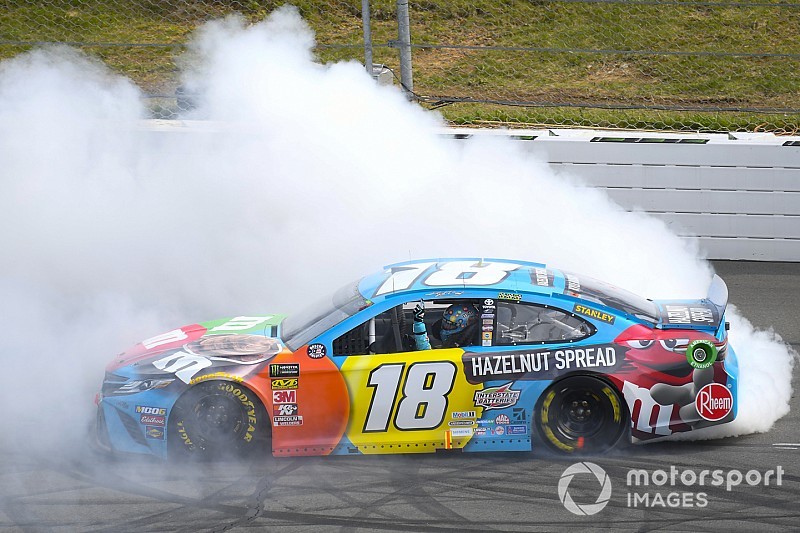 Although he continues to express his dislike of the new aero package, are you surprised by how successful Kyle Busch has been with it?

Jim: I have to say I am a little surprised. Clearly, Joe Gibbs Racing as a whole and Busch in particular have figured out the aero package well enough to be competing for wins virtually every weekend. The only reason I'm a little surprised is because of how strongly Busch seems to dislike it. Many times in racing you see poor results from drivers who don't like a particular form of racing (such as road courses) or a particular track (there have always been some who dislike Darlington for instance). Yet in this case, the more Busch complains about the package, the more wins he seems to rack up wins. At this level, you would think earning victories with such regularity might improve a driver's outlook a bit more.

Nick: It's telling that a driver who has won more races than any other with this package still dislikes it. If he's not happy with it, then there's something that needs fixing. But Joe Gibbs Racing has adapted nicely to this new package with not just Busch, but Truex and Hamlin winning multiple races each.

Tim: I’m not surprised at all with his success this season as I feel he’s one of the best behind the wheel to come along in this generation. What I am surprised about is how much he voices his displeasure of the package despite the amount of wins he has this season. I would expect a driver to be vocal and upset if they are running mid-pack every week and not even close to being competitive for wins. That’s clearly not the case with Kyle Busch.

Do you expect to see the type of race we saw earlier this year at Auto Club Speedway when the Cup Series visits Michigan Speedway this weekend?

Jim: Predictions haven't been worth a lot so far this season, but if I were to guess, I would think this weekend's race would look more like Kansas, simply because Michigan has a much newer repaved surface than Auto Club Speedway (even though they are the same distance and similar shape). Several drivers have voiced optimism (which has been hard to come by this year) that the racing should be good. Let's hope they are right.

Nick: I am at the point where I'm hesitant to make anymore predictions because most have been wrong, but I hope that Michigan will be a good one with how wide it is and the high-speed nature of the track. And yes, it should be similar to what we saw at Fontana.

Tim: I was wondering about this race and what the drivers might say about it as it will be another new track for the rules package. I read that Denny Hamlin expects it to be an exciting race so I’m optimistic. Who really knows with the new rules package, but I agree with Jim, Michigan has newer asphalt than Auto Club and that might play a key role in how the cars perform this weekend.

The NASCAR Cup Series regular season is just past the halfway point. Who do you think is starting to feel the pressure of getting a win and playoff berth with time running out?

Jim: He isn't in danger of not making the playoffs right now, but I do think Ryan Blaney has put a lot of pressure on himself to produce far more consistent results like his Penske teammates Joey Logano and Brad Keselowski. You can tell by his recent comments that he seems to be searching for ways to get back on track and join his teammates in Victory Lane. As for making the playoffs in general, Kyle Larson could really use a win to cement himself in the playoffs, especially as he continues to produce erratic results (but not for lack of trying).

Nick: Jimmie Johnson, Kyle Larson and Erik Jones. I say Jimmie because he's facing the longest winless streak of his career while Jones is surrounded by teammates who have all won multiple races. And Larson has endured a lot of misfortune this season and will likely need a win to make the cut unless the No. 42 team can turn things around.

Tim: While I think Ryan Blaney and Kyle Larson will make the playoffs either way, I am willing to bet they would feel a whole lot better if they could get a win on their resume. For Blaney, he probably wants to stand alongside his teammates Joey Logano and Brad Keselowski as race winners. After his accident and DNF at Pocono Raceway last weekend, I think Austin Dillon is probably feeling feeling the most pressure to get a win as he’s back in the points and will likely not make the postseason without a race win.

Based on his recent race results, has Cole Custer supplanted Christopher Bell as the man to beat in the Xfinity Series this season?

Jim: At the beginning of the season I really believed Bell could run away with this title race this season and I've been pleasantly surprised by how far Cole Custer has come in such a short period of time. Right now, Bell and Custer have the same number of wins, top-fives and top-10 finishes. Who would have thought that? If Custer continues this run, he very well could enter the playoffs as the favorite, especially because he seems to be more solid on the Xfinity Series' road courses - a segment of races where he could really put distance between himself and Bell.

Nick: I'd still put my money on Bell, but Custer has been very impressive this year and continues to match Bell every week. He has improved tremendously and appears to have bridged the gap to his title rival.

Tim: While I agree with Jim that earlier this year I thought the Xfinity Series title was Bell’s to loose, I honestly didn’t expect Cole Custer to run as strong as he has and basically equalled Bell in on-track performance. Based on his recent streak of solid finishes, this could be the confidence builder the young California native needs to stay with and challenge Bell throughout the rest of the regular season and postseason.

Christopher Bell: 2020 was "definitely a down year for JGR"