NASCAR is an acronym for National Association for Stock Car Auto Racing, there are over 1500 races sanctioned by NASCAR.

What began as a way of driving stock motorcars on dirt tracks has today become America's most-watched and biggest sporting event. 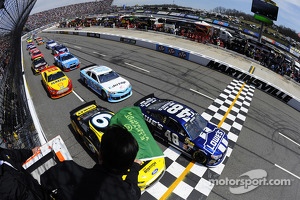 NASCAR has rapidly grown and in many occasions even taken over the NFL as the most-watched sporting event. NASCAR is huge today.

For those people wondering, NASCAR is an acronym for National Association for Stock Car Auto Racing. There are many popular car races which are put on by NASCAR.

There are over 1500 races sanctioned by NASCAR with the Nextel cup, Craftsman series, and the Busch series being the most common ones.


It all started in the early years of the 19th century, when Daytona Beach was the setting for racing and speed cars. It quickly became the place where car speed records were being passed every day. Actually, over 15 records were set there in a span of a few years.

The drivers then started to modify their racing cars in order to escape the sternness of the police force. It was from there that modified vehicles started participating in the racing circuit.


William France, Sr. is the person who can be said to be the founding father of NASCAR or the person who laid the groundwork for the event. He had traveled to Daytona Beach from Washington, D.C. fleeing from the Great Depression. William then entered in the racing experience at Daytona Beach and finished 5th.

This led William France, Sr. to the conclusion that a governing body, a set of regulations and an organized championship were required for the development of the drivers and the race. This led to negotiations with many racing lovers, and NASCAR was formed on the 21/2/1948.

The First Races and Rules


Can you imagine that the first set of NASCAR points system and the rules were written on a saloon napkin? Yes! And the first racing experience which was sponsored by the facultative body was done at Daytona Beach.

However the first ever stock car race was performed on 6/1949, held at the Charlotte speedway. Changes on the car started after about 6 years after NASCAR was formed. And soon, custom-made cars started appearing on the circuit.


Some of the tracks used in the initial racing circuits are still used up to today and one of them is Martinsville Speedway. Darlington Raceway, which was opened in 1950, is another one. A popular track on the Nextel Cup circuit known as Indianapolis Motor Speedway dates back to 1909!


Since the start of NASCAR, new things have been added to include the NASCAR Busch Grand National and Craftsman Truck series. Every year new drivers emerge to take their shot at stardom. For many racers, it is a lifelong dream just to drive NASCAR and race for the celebrated title of 'Champion.'

At the end of each season, points are tallied to see the driver who has ran the most consistently all the way through the year and that driver becomes that year's NASCAR champ for their respected series.

With the tremendous growth of NASCAR over the years, their fans have demanded more opportunities in order to enjoy their favorite sport. The organizers heard their voices and decided to develop NASCAR Thunder which is a chain of officially-licensed souvenir and apparel stores, and the NASCAR Caf, incorporating racing with dining for an excellent racing experience for all drivers and NASCAR fans.

After more than 64 years, the event continues to grow with fans that travel all over the world to watch their favorite driver chasing the checkered flag and, finally, a NASCAR championship. The race drivers are the stars and they offer almost everything. NASCAR racing events have grown into a commercial powerhouse with the passage of time.

Racing events now last an entire weekend instead of just one day, and they can feature anything from military shows by members of the armed forces to concert performances by great artists. You cannot find another sport event that offers the show week in and week out that NASCAR Nextel Cup race provides. Want to become a real NASCAR driver? Hire a car at Car Rentals Market and go!