The XXII Olympic Winter Games in Sochi, Russia began Feb. 7, but the four-man bobsled competition is set for Feb. 22-23 at the Sliding Center Sanki, located 37 miles from Sochi in Rzhanaya Polyana. 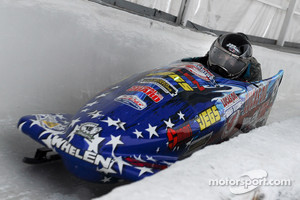 The two four-man U.S. Olympic bobsleds, dubbed Night Train and the new Night Train 2, were developed, built and refined by the Bo-Dyn Bobsled Project. The bobsleds arrived in Russia from the 2013-14 World Cup circuit where they achieved gold medal results in four of eight events between November 30 and January 26.

The journey to competition on the world stage began in Huntersville, N.C., in an otherwise inactive race shop owned by NASCAR Sprint Cup Series star Joey Logano. There, up to 18 bobsleds were once built, maintained and prepared for competition. Now, it is the exclusive home to four-man bobsleds used in World Cup and Olympic competition. The Joey Logano Foundation is also a supporter of the United States Paralympic Sled Hockey Team.

"Whelen Engineering has been a big part of the Bo-Dyn Bobsled's development," Caligiore said. "They are a key player in building the program."

"This is Geoff Bodine's dream ... Americans racing American-made bobsleds at no cost to the athletes," Kurze said. "Geoff is the inspiration for all of this."

The Bo-Dyn Bobsled Project was inspired by Bodine's desire to see U.S. Olympic athletes compete in American-made bobsleds. The teams had been using hand-me-down bobsleds -- known as "bobsleighs" in international vernacular -- from European teams. The Bo-Dyn name is a derivative of the first two letters of Bodine's last name and the first three letters of "Dynamics" from Cuneo's chassis brand.

Bo-Dyn bobsleds first appeared in the 1994 Olympic Winter Games and the four-man U.S. Bobsled team won Olympic gold for the first time in 62 years at the 2010 Olympic Winter Games in Vancouver. After the Vancouver games, the Bo-Dyn Bobsled Project moved their base of operations from Colchester, Conn., to Harrisburg, N.C.

"We wanted to be closer to the hub of NASCAR technology," Bo-Dyn project spokesman Sandy Caligiore said of the move to North Carolina.

Kurze and Bodine became acquainted when Whelen was an associate sponsor on Bodine's NASCAR Sprint Cup Series cars in the mid-1990s and the Bo-Dyn Bobsled Project was still in its infancy.

"They do wind tunnel testing with the athletes in the bobsled. They put the athletes in different positions in the sled to find the best alignment and get the best aero flow. That's really important," Kurze said. "Medals can be decided by a fraction of a second. A team can go from gold to zero faster than the blink of an eye."

Whelen Engineering's machine shop in New Hampshire developed the D-shaped steering rings being used by the drivers of Night Train and Night Train 2. The rings are attached to a mechanism that connects to the runners and steers the bobsled. The bobsleds have no seats and no suspension, Kurze noted.

"There is a cultural crossover between bobsled racing and NASCAR racing. The Cup series has a rule book and bobsleds have a rule book. We use the same approach to prepare for competition," Cuneo said. "The engineering problems are different, but we approach them the same way. We have to find speed within the limitations of the rule book.

"Our bobsled team's ability to respond quickly to challenges at the track – that really sets us apart from the competition," Cuneo added.

Cuneo and Jim Garde have both been primary engineers, builders and "crew chiefs" for the Bo-Dyn bobsleds. Garde, once head fabricator for Hendrick Motorsports, is on site in Rzhanaya Polyana serving in all those capacities. He started working for Cuneo at Chassis Dynamics when he was just 11 years of age.

"Being a bobsled crew chief is the same as being a NASCAR crew chief," Cuneo said. "There is a tremendous amount of work.

"Every time a sled runs it takes a beating like someone pounded it with a sledge hammer. The sleds require a lot of tuning day-to-day. Just like in NASCAR, track conditions change and the driver has to communicate those changes to the crew chief.

"A bobsled track is a living thing," Cuneo said, "and the driver has to tell the crew chief what the sled is doing in what location on the track. The surface can depend on minerals in the water. A surface can be hard on top and soft underneath or visa-versa. The track is hand sculpted so the contours change every day. One guy may prepare a section of the track differently than the next. The crew chief has to take the driver's input and make things happen. There are many adjustable points on a sled."

At the Sliding Center Sanki, the hardness of the racing surface can be controlled by a refrigeration system beneath the ice. Olympic bobsled track infrastructure has included refrigeration since 1972.

"One turn of a knob can release a chemistry mix into the ice to help maintain its hardness," Kurze said of the technology. "The hardest ice creates the fastest track."

While the bobsleds are built for speed, the track in Russia is unique to the sport because it has three uphill sections. Those sections were designed to reduce top speeds by up to 10 mph for the sake of safety. Top speeds in next week's competition are expected to be around 85 mph.

Baker, Elliott, Labonte, Stefanik and Yates make their way onto the NHOF ballot