Charlotte Media Tour: Monday Quips By: Bill King The 2005 NASCAR Nextel Media Tour kicked off Monday in Charlotte, N.C., organized for the 22nd consecutive year by Lowe's Motor Speedway. The opening activity was a luncheon at the University Place ... 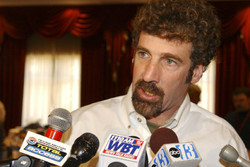 Boris Said.
Photo by Harold Hinson Photo.
The press conference reinforced the burning question: "Is NASCAR ready for Boris Said?" and not the other way around.

Speaking of why new team owner Bob Sutton, known for his business acumen, picked him for the ride, Boris quipped: "Bob sees value where others don't."

Asked how nervous he might be trying to qualify for the Daytona 500 next month with a brand new team, Boris said: "There's 42 other guys that'll be scared to death that I might be on the track with them."

He didn't give himself much chance of actually winning Daytona in his first try, but said: "My chances (of winning) are 1 in 43, and that's better than I've ever had in my life."

New teammate Joe Nemechek mentioned the first time he'd given Boris advice on racing on an oval: "That was at Kentucky and after four laps all that was left was a pile of sheet metal for charity. But I think he's smarter now." To which, Boris said, "Yeah, I stayed in a Holiday Inn Express last night."

The third team driver Scott Riggs, a rookie in 2004, said he'd looked to the veteran Nemechek all last season for guidance. Said said, "So I get to fetch Joe's coffee this year?" Riggs grinned: "And his dry cleaning. Don't forget the dry cleaning."

Boris Said will fill more than his share of tape cassettes and reporter's notebooks this season.

In asking a question of France, the Charlotte Observer beat writer introduced himself as "David Poole, formerly of Pit Bulls." France smiled, "Sounds good to me." The half-hour Saturday evening fusillade on SpeedTV featured a panel of flame throwing journalists: Poole, Mike Mulhern of the Winston-Salem Journal, Ben Blake of RACER magazine and Marty Smith of NASCAR.com with occasional appearances by the acerbic Robin Miller. The show was great fun but a ratings bomb. France, often the target, was undoubtedly pleased at the program's demise.

Commenting on the wrist slap that Jimmie Johnson received for knocking victory lane sponsor PowerAde's huge display bottle from the roof of his racecar, Waltrip suggested that NASCAR should lighten up on drivers during an obvious high moment: "I say, let 'em have fun; knock over a few bottles." France looked over his shoulder at DW and said, "I'll let you make a few sales calls for us." 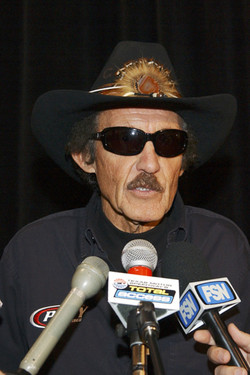 Richard Petty.
Photo by Harold Hinson Photo.
A question was addressed to the panel regarding the creation of a pension fund. There was some hedging before Richard Petty suggested that with the salaries drivers are currently drawing that they should be capable of taking care of themselves. "It took me 15 years to make a million dollars," said The King. "Drivers these days make a million bucks walking from the racecar to the hauler."

The Craftsman Truck Series feed - usually breakfast, but this year a dinner - is always high in entertainment value. This year, more than a dozen competitors fielded questions submitted by various members of the media. Mind you, this was right after a convivial happy hour hosted by Dodge Motorsports.

Not to be outdone by Cook, Rick Crawford (Circle Bar Racing Ford) immediately responded to a question about what he would consider a bigger thrill, being catapulted from an aircraft carrier or winning Daytona by saying: "Craftsman tools."

Ricky Craven (Roush Racing Superclips Ford) asked if given the opportunity how would he choose between Formula 1 and the World Rally Championship, deadpanned: "I actually considered both those two the past year."

Bobby Hamilton (BHR Dodge) was describing a diaper crisis while on an outing with his new granddaughter: "I've never changed a diaper. I paid people to change Bobby Jr."

Ted Musgrave (Ultra Motorsports Mopar Dodge) was asked what was the strangest place that someone had actually recognized him. "Light on or lights off?" he asked back.