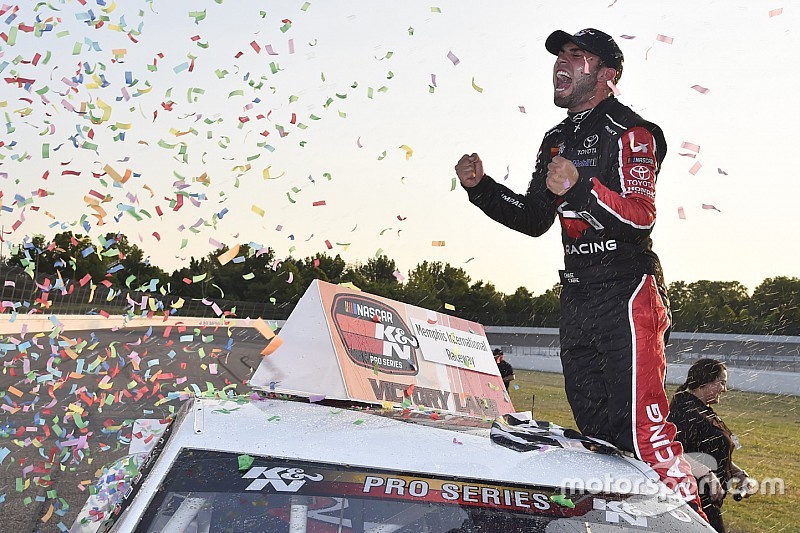 When Cabre was selected to participate with the NASCAR Drive for Diversity program a couple of years ago, observers felt he had the talent to win races. That talent turned into results on Saturday.

Cabre qualified mid-pack but was able to work through the field on long runs and eventually take the checkered flag in the Memphis 150 presented by Autozone at Memphis International Raceway on Saturday.

“This feels great to win and it’s been a long time coming,” said the native of Tampa, Fla. “This feels better than I expected. Just shows you can’t take things for granted.

“Three years and coming up second a handful of times, it’s so good to come out on top. My crew gave me a good car, I’m really thankful for the opportunity.”

Cabre became the eighth different driver from the NASCAR Drive For Diversity driver development program to win a K&N Pro Series East race. He gave Rev Racing, which has fielded the competition team for the program since 2010, its 20th win.

Cabre dove inside of Sam Mayer on a restart and made contact with the No. 21 car that shot him up the track into Max McLaughlin. The Rev Racing driver didn’t look back,  surviving one more restart and a charge from Ty Gibbs to earn the victory.

After crashing out a couple of weeks ago at Wall Stadium, Doug Coby showed once again why he’s a perennial favorite to win the NASCAR Whelen Modified Tour championship.

The win was the third in six Tour races so far this season for Coby who started from the pole at Seekonk Speedway and scored his 27th career victory and second at the Massachusetts short track.

“I think obviously we are establishing ourselves as a really dominant car at all different size tracks,” Coby said. “We have been on our game and picked up our game everywhere (compared to last year). It’s a long season, and we just need to make sure we keep learning if we are going to be the ones to keep winning races.”

Matt Hirschman quickly got by Coby for the lead but Coby was able to get back by him on Lap 15 and never looked back throughout the 150-lap race.

Defending series champion Justin Bonsignore won this race last year and was chasing Coby throughout the second half of the race but was never able to make the pass for the lead and ended up second.