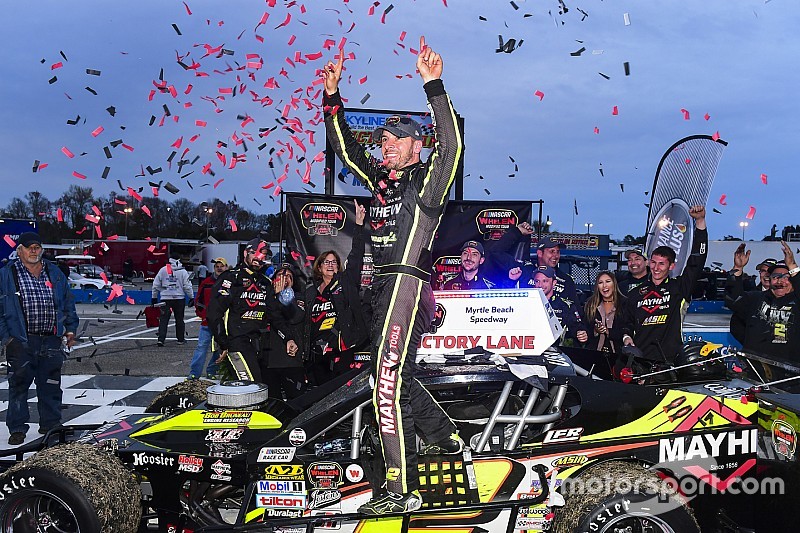 After winning pole in qualifying, Doug Coby is forced to start from the rear of the field but still still picks up 25th NASCAR Whelen Modified Tour victory.

Although he probably wasn’t happy at the start of the race, the five-time NASCAR Whelen Modified Tour champion was all smiles at the end of the race picking up his first series win at Myrtle Beach Speedway on Saturday.

Coby qualified on the pole but was forced to start at the rear of the field for an unapproved tire change before the start of the race.

Coby worked his way through traffic with his fast car and pit strategy.

Jon McKennedy took the top spot at the start of the race and eventually led 64 laps in the race but Myrtle Beach Speedway is known for abrasive asphalt and his tires didn’t hold up too well.

That opened the door for Coby to make his charge after making a pit stop for fresh tires during caution on Lap 110.

Coby used the fresh tires to move up to the top three before he eventually passed Kyle Ebersole on Lap 122 and went on for the win.

“This was an interesting one,” Coby said. “Ultimately, I had the best car I have ever had here. We had to go perform, and we did. The book is going to say we won the pole, started first and finished first, but the reality is, we started 32nd and finished first. We passed a lot of cars.”

Although he didn’t get the win, McKennedy is pleased with his effort.

“We put two tires on and the No. 2 car put three in, but we still had a really good car,” McKennedy said. “We asked the right-front tire to go 150 laps, which is tough. They knew we were here. It was a great effort by everyone.”

Defending series champion Justin Bonsignore finished 12th in the event that featured a 32-car field. The series will remain in the South with a visit to South Boston Speedway on Saturday, March 30.