After Vegas win, Hailie Deegan ready to “go after a championship” 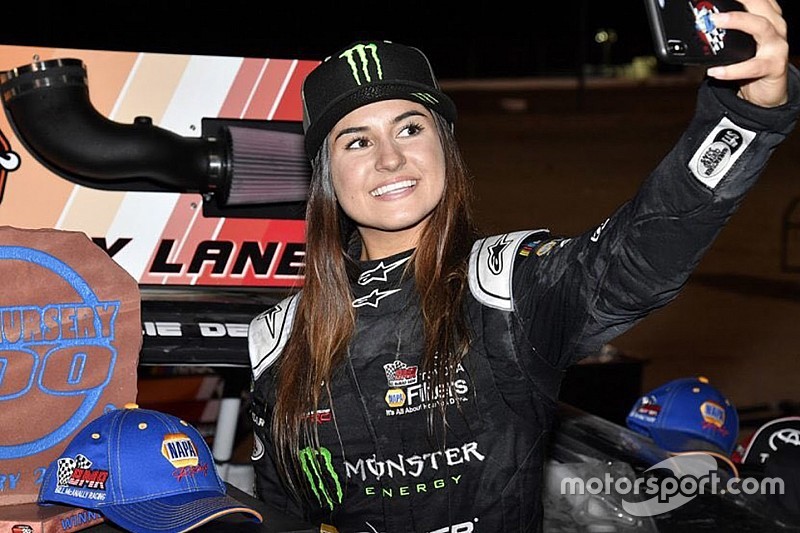 The 17-year-old competed in the K&N Pro Series East season opener last month in Florida and didn’t have the result she had hoped for.

“New Smyrna was a rough race,” said Deegan who started from the pole in the race but experienced mechanical issues and finished 16th. “We went out there and showed we were fast. We showed we were one of the fastest cars out there.

“I think that what I wanted to do during the off season was work hard so we can show that. Once we did show that at New Smyrna, it really showed everyone we were going to be fast hopefully all season. It didn’t end the way we wanted it to. But everyone saw we were fast.”

Deegan who drives for former race and veteran car owner Bill McAnally, said the Las Vegas weekend was a big kick-off to what she hopes is a successful racing season.

“This is a big weekend for me starting off with the win from the Las Vegas Dirt Track, which going into that race, I knew we were going to have to win,” said Deegan. “Last year, I got second, and I wasn’t happy with it.

“It was my first time racing with a stock car on dirt. I am dirt racer and I wanted to prove we could be fast on dirt and get it done. I wanted to come into this year and really show we can be competitive during this K&N Pro Series West season and go after a championship.

“I am super excited to drive the Supra during the Xfinity race. I was able to drive it a little bit. It’s fast. I like it. I am into all the sports cars. Just going out there, it will be fun pacing the field. I have some friends racing in the Xfinity race. It will be cool to get on track.”

On Friday, Venturini Motorsports announced that Deegan would run six races in the ARCA Racing Series this season with the organization as well as the K&N Pro Series East race at Bristol, Tenn.

“Toyota and TRD (Toyota Racing Development) put this opportunity together for me to be racing,” Deegan said of the ARCA deal. “I start at Toledo Speedway. I have a test there beforehand. We have to get to more racing and get more wins.

”I think NASCAR racing comes down to the races where we’re not just following the leader to the finish. It’s going to the last-lap passes and making those risky moves. That’s what makes drivers unique. I think the people who just stay in line become a whole segment of average drivers and I don’t want to be average.

Next up for Deegan will be the K&N Pro Series West race at Irwindale (Calif.) Speedway later this month, where she will try to make it two wins in a row.

NASCAR Mailbag: Where is the advantage?